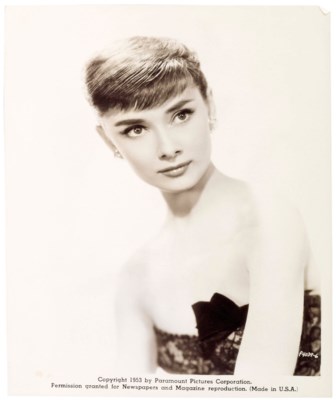 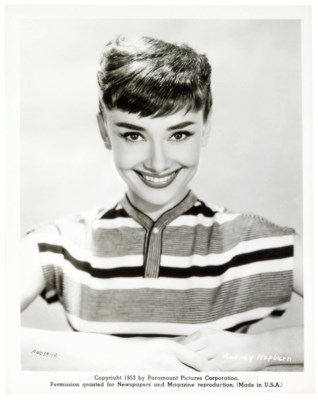 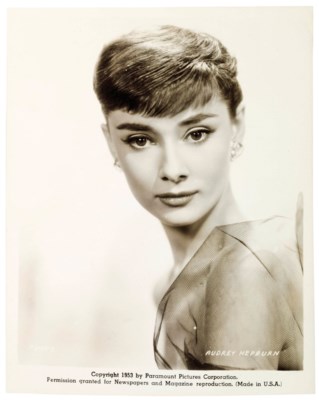 Lot 25
SABRINA, 1954
Three gelatin silver publicity stills; Audrey Hepburn for the 1954 Paramount production Sabrina, circa 1953
GBP 500 - GBP 800
A Christie's specialist may contact you to discuss this lot or to notify you if the condition changes prior to the sale.
View Report
The condition of lots can vary widely and the nature of the lots sold means that they are unlikely to be in a perfect condition. Lots are sold in the condition they are in at the time of sale.

Overall good condition, nicks, bumps and creases consistent with age and use, two prints with toning to image.

It's the second big film, said Audrey, which will prove if I was really worthy of the first. That second film was Sabrina, a modern Cinderella story set in Long Island, Audrey playing the chauffer's daughter turned sophisticated Parisian who falls in love with, first the youngest, then the eldest son of her father's millionaire employer, the love interests played by William Holden and Humphrey Bogart respectively. Bogart was notoriously difficult on set, hated Holden and even complained about Audrey, grumbling to Clifton Webb She's okay... if you like to do thirty-six takes. Director Billy Wilder, however, had such a high opinion of the young star that he consulted her on everything, becoming a great mentor and friend.

On top of the on-set animosity between the leading men, the script had become a chaos of re-writes. According to Wilder, the original screenplay had been written for Cary Grant rather than Bogart, so Wilder and screenwriter Ernest Lehman stayed up most nights getting the pages ready for the next day. This only increased the tension on set, as a grumpy Bogart lost his temper over the script.

Despite the production troubles, the film was a success, and Audrey sparkled. As part of the plot, Wilder wanted Sabrina dressed in Parisian couture on her return from France and sent Audrey to Paris to pick out her wardrobe. Thus began a lifelong association between Audrey and Hubert de Givenchy. Givenchy remembered She knew exactly what she wanted... What I invented for her eventually became a style, so popular that I named it "decollete Sabrina."

Post Lot Text
This lot has been imported from outside the EU for sale and placed under the Temporary Admission regime. Import VAT is payable at 5% on the hammer price. VAT at 20% will be added to the buyer’s premium but will not be shown separately.
Please see Conditions of Sale for further information.