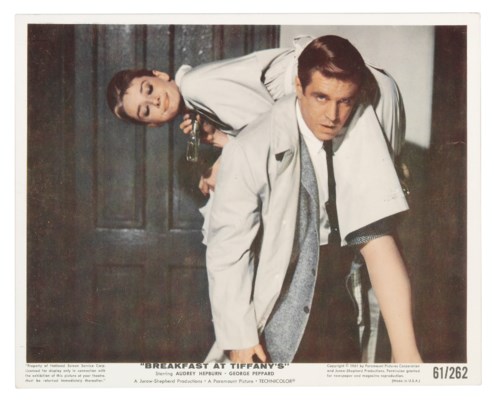 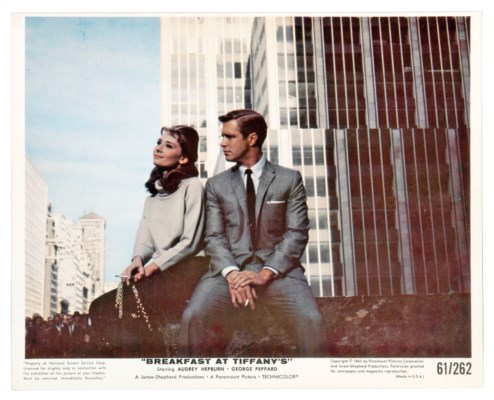 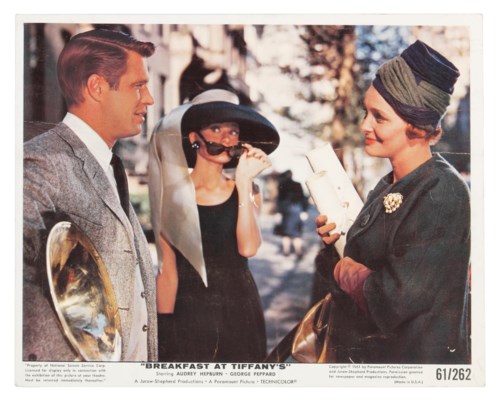 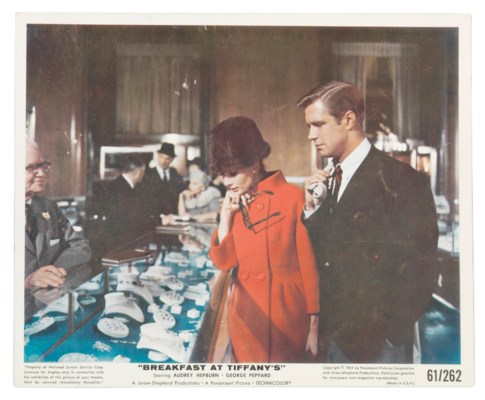 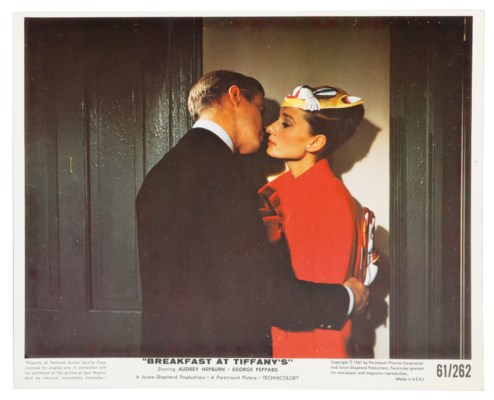 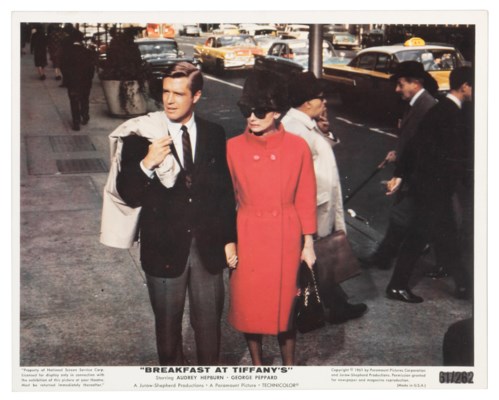 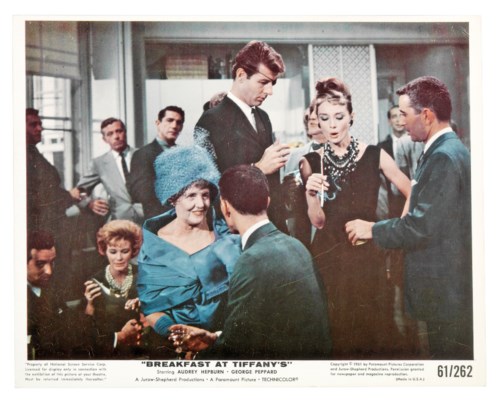 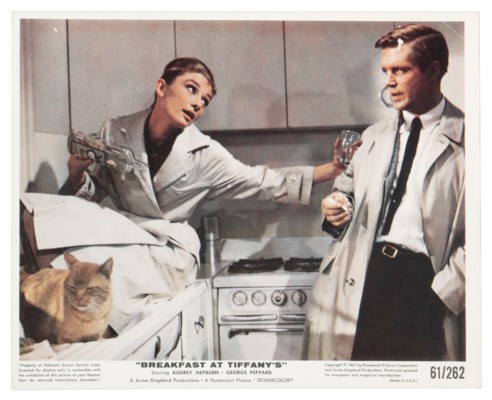 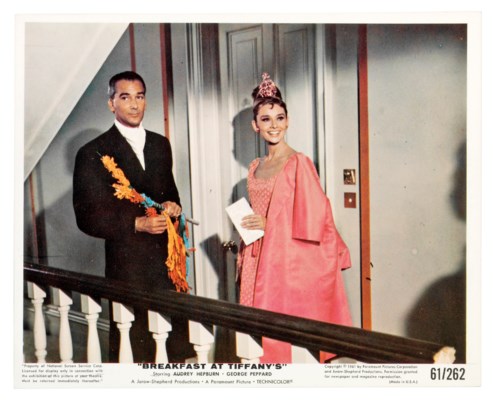 Lot 426
BREAKFAST AT TIFFANY'S, 1961
NINE LOBBY CARDS
GBP 300 - GBP 500
A Christie's specialist may contact you to discuss this lot or to notify you if the condition changes prior to the sale.
View Report
The condition of lots can vary widely and the nature of the lots sold means that they are unlikely to be in a perfect condition. Lots are sold in the condition they are in at the time of sale.

Fair to very good condition, wear to corners and edges, some surface scuffs, paper loss verso due to tape removal, one with horizontal crease across Holly's face and staple holes

Lobby Cards were designed for display in a cinema lobby or foyer to lure the movie-going public. Typically released in sets of 8, each card depicted a different scene from the film. Sets of up to 16 cards were released for larger productions.

Holly Golightly in Breakfast At Tiffany’s would be Audrey Hepburn’s defining role, establishing her status as one of the greatest screen legends and style icons of all time. Even modest Audrey admitted it was the movie she felt least uncomfortable watching, adding …But the two things I always think of when I see it are how could I have abandoned my cat? And Truman Capote really wanted Marilyn Monroe for the part. Despite the diplomatic congratulations Capote sent to Audrey on learning of Paramount’s casting decision (see Part I, lot 120), he had in fact wanted Monroe in the lead role Marilyn was my first choice to play the girl, Holly Golightly. I had seen her in a film and thought she would be perfect for the part. Holly had to have something touching about her… unfinished. Marilyn had that. Reportedly Monroe was in the running, but pulled out when her acting coach Paula Strasberg advised her not to play a lady of the night.

Hepburn too was reluctant to take on the role, fearing the character was out of her range. Holly is so contrary to me, Audrey confided to agent Kurt Frings, she frightens me. In order to commercialise the storyline, placate the censors, and persuade Hepburn to accept the part, screenwriter George Axelrod rewrote Capote’s Holly, who was essentially a hooker, and turned her into a whimsical kook. Frings pressed her, venturing that Holly was …not anti –Audrey, but the first step to the new Audrey. Audrey, recognising that she needed to transition from the gamine ingénues of her twenties into more complex, sophisticated roles, cautiously agreed to take on the riskiest challenge of her career; later admitting to Frings …this is the best thing I’ve ever done, because it was the hardest.
.

The film was a moderate hit at the time, nominated for five Academy Awards including Best Actress for Hepburn, although only Henry Mancini won on the night for his jazzy score and haunting ballad Moon River. The New Yorker was perhaps the most prophetic in their review, declaring millions of people are going to be enchanted by this picture. Decades later, the image of Hepburn as Holly Golightly with her high chignon, pearls and cigarette lighter is one of the most recognisable of the 20th Century. As the highlight of a dazzling array of costumes designed for Miss Golightly, Givenchy gave us the Little Black Dress, which would influence the style of women all over the world for years to come. Wasson believes the movie had another, far more significant, effect on women, initiating a gender shift in 1960s Hollywood: There was always sex in Hollywood, but before ‘Breakfast At Tiffany’s,’ only the bad girls were having it…. all of a sudden, because it was Audrey who was doing it, living alone, going out, looking fabulous and getting a little drunk, it didn’t look so bad anymore. Being single actually seemed shame free. It seemed fun…. A glamorous fantasy life of wild kooky independence and sophisticated sexual freedom.

Hepburn’s portrayal of the real phoney Holly Golightly also had a pivotal impact on her career. Writing for Time, Richard Corliss declared: ‘Breakfast at Tiffany's’ set Hepburn on her 60s Hollywood course. Holly Golightly, small-town Southern girl turned Manhattan trickster, was the naughty American cousin of Eliza Doolittle, Cockney flower girl turned Mayfair Lady. Holly was also the prototype for the Hepburn women in ‘Charade,’ ‘Paris When It Sizzles’ and ‘How to Steal a Million’: kooks in capers. And she prepared audiences for the ground-level anxieties that Hepburn characters endured in ‘The Children's Hour,’ ‘Two for the Road’ and ‘Wait Until Dark.’

* Please see Section K of our Conditions of Sale for definitions of cataloguing symbols.

Additional charges, including buyer’s premium, value added, sales or compensating use tax or equivalent tax, any and all shipping expenses, including costs, packing and handling, any loss damage liability fees, customs duty, import tax, any local clearance fees applicable for your country and all other applicable charges will apply. In addition to the hammer price, the buyer agrees to pay to us the buyer’s premium together with any applicable value added tax, sales, or compensating use tax or equivalent tax in the place of sale.

Christie's is required to collect New York sales tax for any property purchased in this sale if (a) either you or your agent (including a contract carrier) collect the property in New York (even if New York is not the final destination) or (b) Christie's arranges shipment of the property into New York State. The amount of New York sales tax varies depending on the location of the shipment within New York State. We recommend that you obtain your own independent tax advice if you have further questions.

You must pay the full amount due (comprising the hammer price, buyer’s premium, any applicable value added, sales or compensating use tax or equivalent tax, any and all shipping expenses, including costs, packing and handling, any loss damage liability fees and all other applicable charges) no later than 11:59 p.m. (BST) on October 6, 2017. This applies even if you wish to export the lot and an export license is, or may be, required. You will not acquire title and own the lot until all amounts due to Christie’s have been received by Christie’s in full, cleared funds. Purchases cannot be delivered to P.O. boxes.