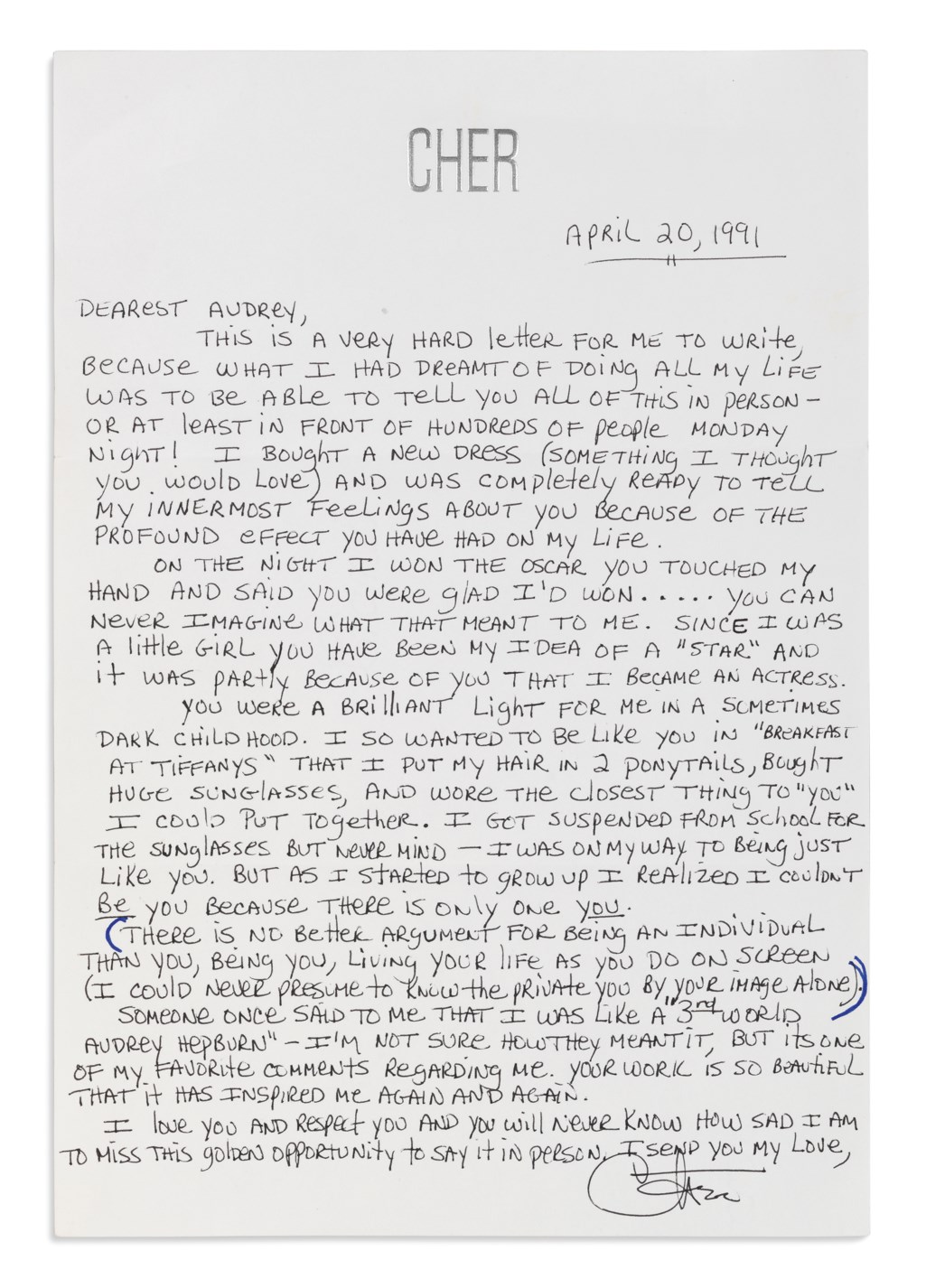 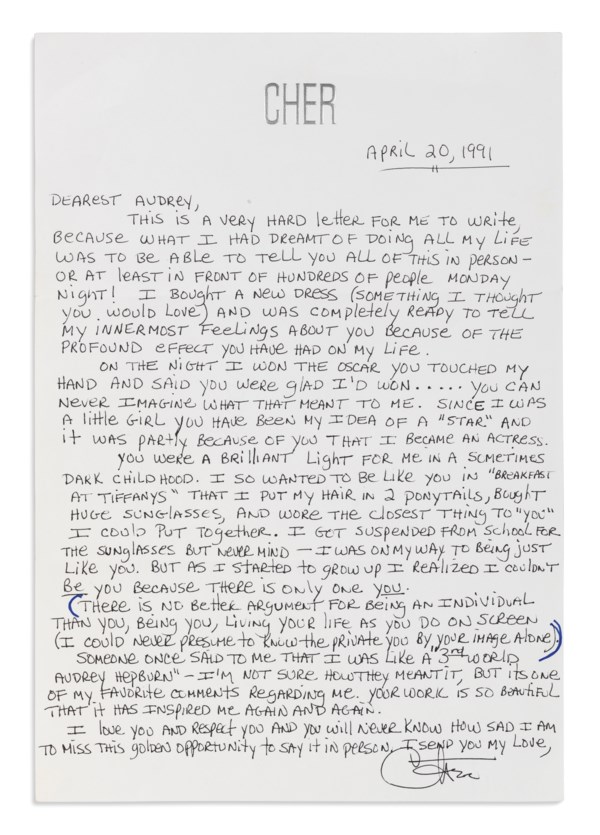 Lot 521
CHER
A HANDWRITTEN LETTER
GBP 300 - GBP 500
A Christie's specialist may contact you to discuss this lot or to notify you if the condition changes prior to the sale.
View Report
The condition of lots can vary widely and the nature of the lots sold means that they are unlikely to be in a perfect condition. Lots are sold in the condition they are in at the time of sale.

A handwritten letter from Cher to Audrey Hepburn on Cher's personalised stationery, dated 20 April, 1991, the letter conveys her disappointment at having to pull out of the Film Society of Lincoln Center’s Tribute to Audrey Hepburn, where she had planned to honour Hepburn and the profound effect she had on her life, expressing her admiration Since I was a little girl you have been my idea of a "star" and it was partly because of you that I became an actress, and recalls the time she was suspended from school for dressing like Audrey in Breakfast At Tiffany's, Cher goes on to reveal Someone once told me I was like a 3rd world Audrey Hepburn... it's one of my favourite comments, and stresses that Audrey has been an inspiration to her, concluding by sending her love and respect, signed in black ink Cher
10 ½ x 7 ¼ in. (26.7 x 18.4 cm.)

The Film Society of Lincoln Center’s Gala Tribute to Audrey Hepburn on 22 April, 1991, at Avery Fisher Hall in New York was, according to biographer Barry Paris, the most successful since the first Lincoln Center tribute in 1972 to Charlie Chaplin. Hepburn was honoured with tributes by directors Billy Wilder and Stanley Donen, co-star Gregory Peck, and many others.

Paris describes how Gala chairman Ralph Lauren set the evening’s tone by, professing a lifelong adoration of Hepburn. Stanley Donen topped him by noting, “My passion for her has lasted through four marriages—two of hers and two of mine.” He was topped in turn by Billy Wilder, who said he fell in love with her within five seconds of meeting her on the set of Sabrina, and then reprised one of his best lines: “I talk in my sleep, but fortunately, my wife’s name is Audrey.”

Audrey's partner Robert Wolders had invited a special guest, telling Paris Cher was a great personal favorite of Audrey’s. When Wendy pointed out we had all men and no women, I suggested her as a surprise for Audrey, who adored her in Moonstruck. However, as Cher's letter attests, she was reluctantly forced to pull out due to illness just before the event and sent this private note to express her admiration and respect for the actress instead.

* Please see Section K of our Conditions of Sale for definitions of cataloguing symbols.

Additional charges, including buyer’s premium, value added, sales or compensating use tax or equivalent tax, any and all shipping expenses, including costs, packing and handling, any loss damage liability fees, customs duty, import tax, any local clearance fees applicable for your country and all other applicable charges will apply. In addition to the hammer price, the buyer agrees to pay to us the buyer’s premium together with any applicable value added tax, sales, or compensating use tax or equivalent tax in the place of sale.

Christie's is required to collect New York sales tax for any property purchased in this sale if (a) either you or your agent (including a contract carrier) collect the property in New York (even if New York is not the final destination) or (b) Christie's arranges shipment of the property into New York State. The amount of New York sales tax varies depending on the location of the shipment within New York State. We recommend that you obtain your own independent tax advice if you have further questions.

You must pay the full amount due (comprising the hammer price, buyer’s premium, any applicable value added, sales or compensating use tax or equivalent tax, any and all shipping expenses, including costs, packing and handling, any loss damage liability fees and all other applicable charges) no later than 11:59 p.m. (BST) on October 6, 2017. This applies even if you wish to export the lot and an export license is, or may be, required. You will not acquire title and own the lot until all amounts due to Christie’s have been received by Christie’s in full, cleared funds. Purchases cannot be delivered to P.O. boxes.