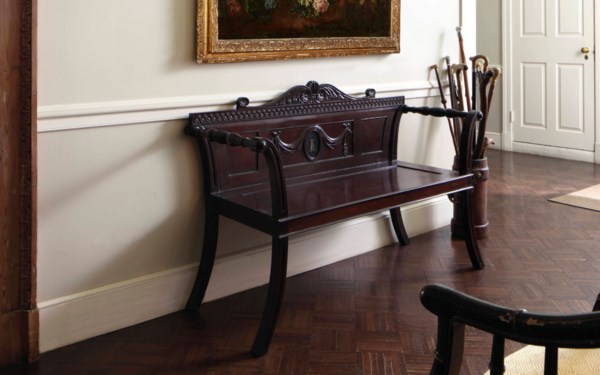 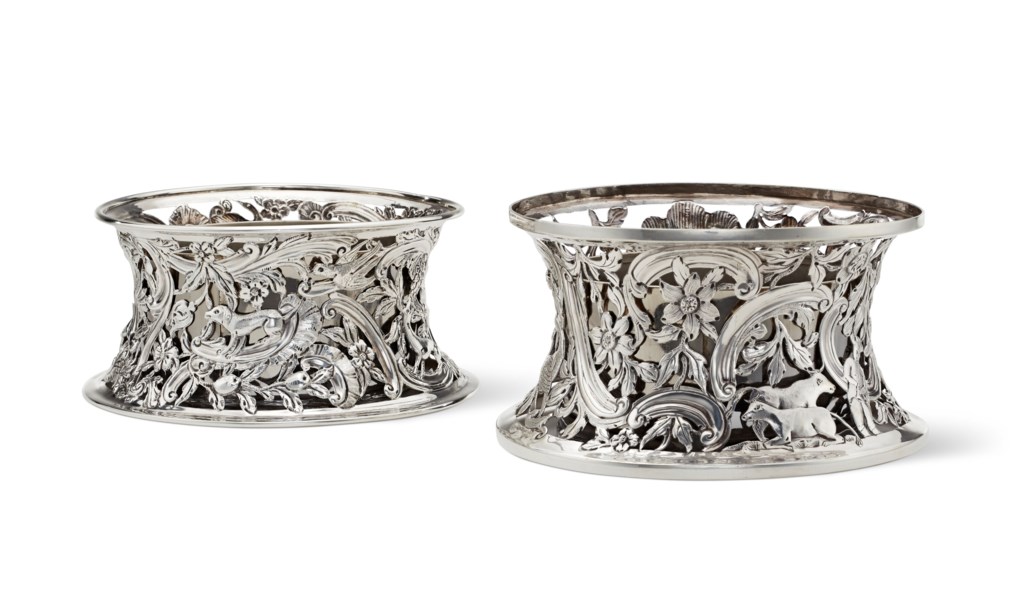 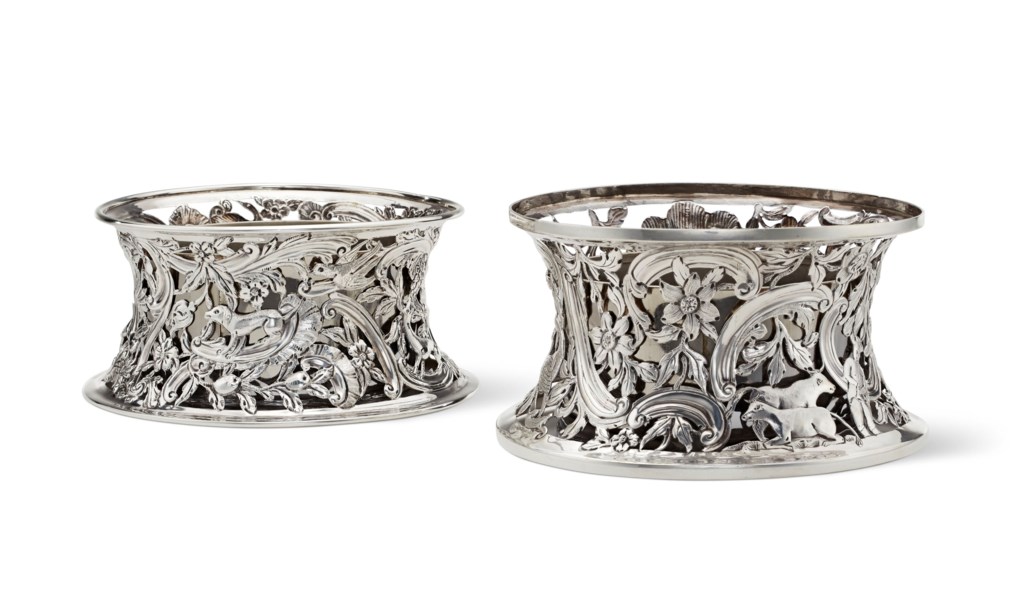 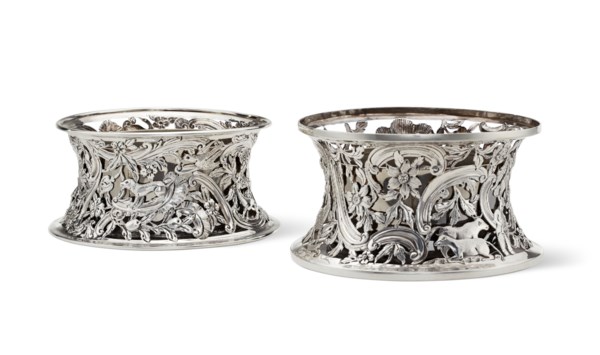 Lot 79
TWO SIMILAR VICTORIAN SILVER DISH RINGS
MARK OF WEST & SON, LONDON, 1895-1897
USD 800 - USD 1,200
A Christie's specialist may contact you to discuss this lot or to notify you if the condition changes prior to the sale.
View Report
The condition of lots can vary widely and the nature of the lots sold means that they are unlikely to be in a perfect condition. Lots are sold in the condition they are in at the time of sale.

Both with some scratches consistent with age and use, cartouches vacant but do not appear to have been previously engraved, the liners with areas of excess solder and some minor dings to bases, one quite tight in ring, but still able to be removed, chased and molded decoration crisp, generally good condition.
One 41⁄4 in. (10.8 cm.) high, the other 33⁄4 in. (9.5 cm.) high

Both reel form, the sides pierced and chased with foliage and scrolls flanking a rocaille cartouche, one with various flowers, dogs, and foxes, the other with various flowers, birds, cows, and a man playing a penny whistle, both with associated silver-plated liners, marked on foot rims
8 in. (20.3 cm.) diameter
26 oz. (809 gr.) weighable silver

Christie’s is honored to present property from the collection of Marion Oates Charles, Lots 1 through 97 These works that include European and English furniture, silver, ceramics and fine art as well as jewelry by makers Verdura, Henry Dunay and Seaman Schepps offer a glimpse into the eclectic, but always elegant taste of this American original.
Marion Oates Charles, known to most as “Oatsie”, was born on September 29, 1919 in Montgomery, Alabama. As a young woman, her beauty and quick wit were her trademarks. Though a granddaughter of a Civil War colonel, congressman, and governor, Oatsie broadened her horizons to attend boarding school in pre-war Europe, debut in New York and eventually become one of the most celebrated hostesses in Washington, D.C.
In 1942, Oatsie married Thomas Leiter and they moved into an apartment in Washington’s Dupont Circle. She immersed herself in a formidable social set that included politicians, business tycoons, and socialites alike. During the decades she spent in her R Street home, Oatsie counted Katharine Graham, Nancy Reagan, Bill Blass, Truman Capote, and Gore Vidal among her close friends. Perhaps most notably, she socialized with the James Bond series’ author Ian Fleming and is credited with recommending the books to another good friend, then-Senator John F. Kennedy, while he recuperated from back surgery. The subsequent inclusion of Fleming’s novels in a publication of the newly elected President’s reading list projected the James Bond character to national attention and helped launch the Bond franchise that continues today.
In 1952, Oatsie and Thomas Leiter purchased the Newport cottage ‘Land’s End’, whose previous owners included novelist Edith Wharton. In 1957, Oatsie sold ‘Land’s End’ to move into its gardener’s cottage ‘The Whim’. In Newport, she devoted herself to philanthropic efforts. Doris Duke, a neighbor and good friend, appointed Oatsie to the Board of Directors of her foundation. Oatsie also served as President of the Board of Trustees of the Newport Restoration Foundation. On December 5, 2018, in her beloved home ‘The Whim’, Oatsie Charles died, leaving an indelible legacy as one of the last great doyennes of American society. She was survived by her daughter, three grandchildren, and eight great-grandchildren.