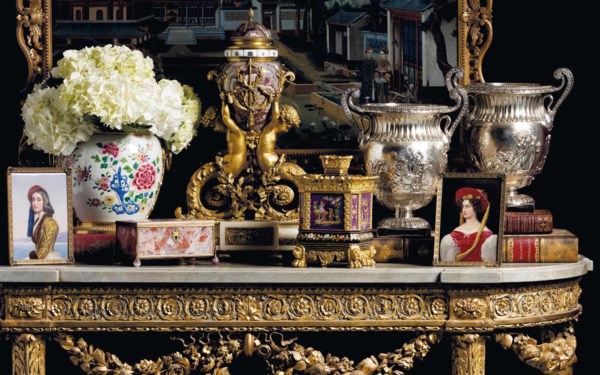 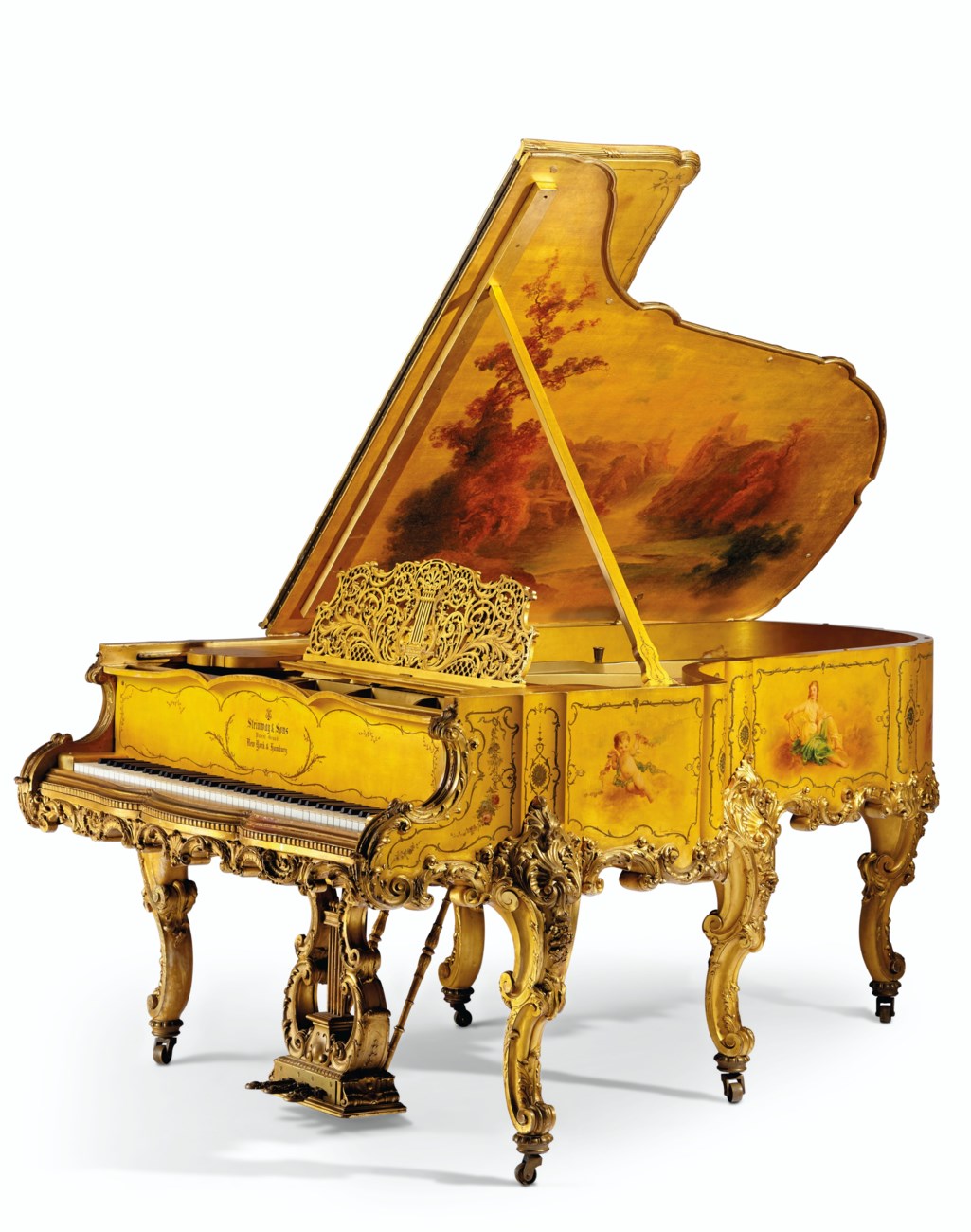 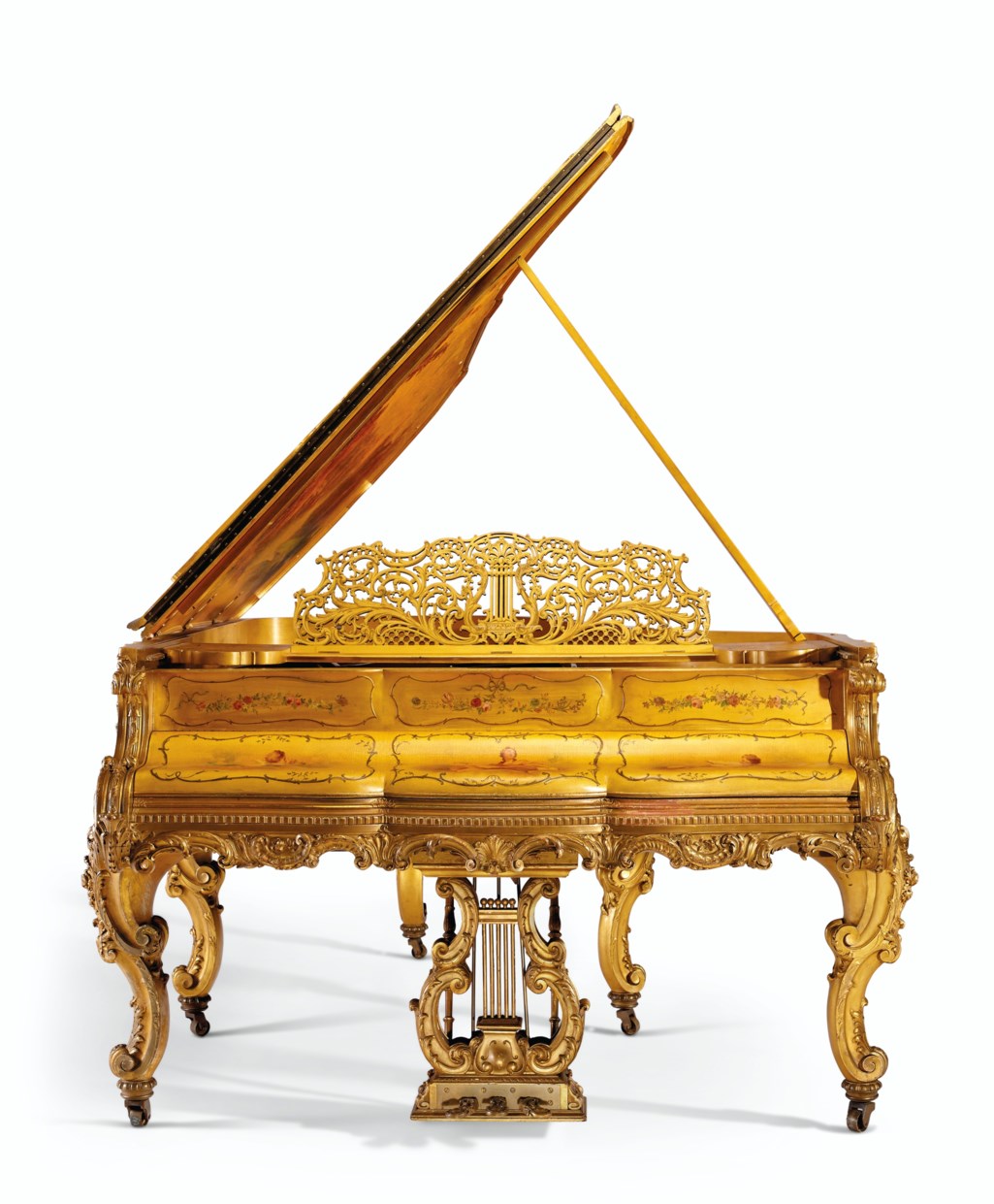 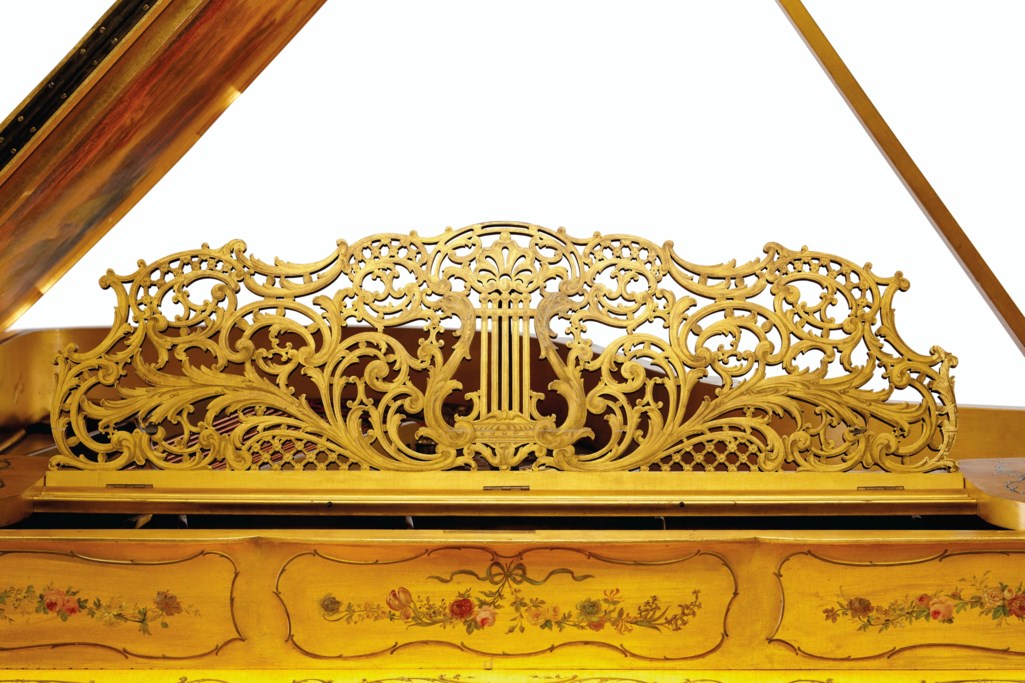 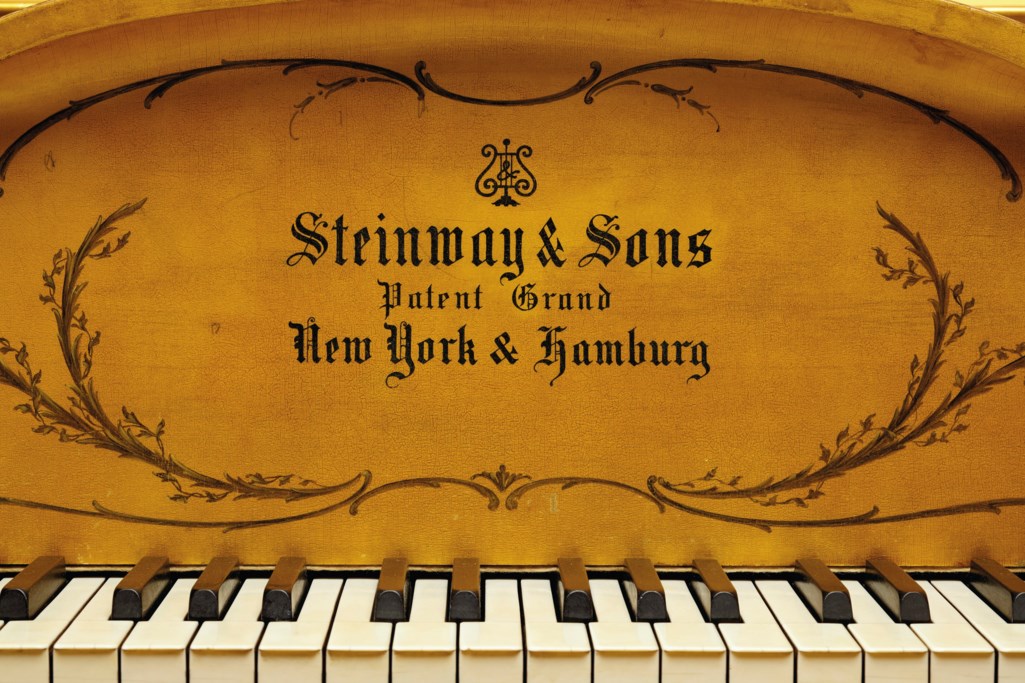 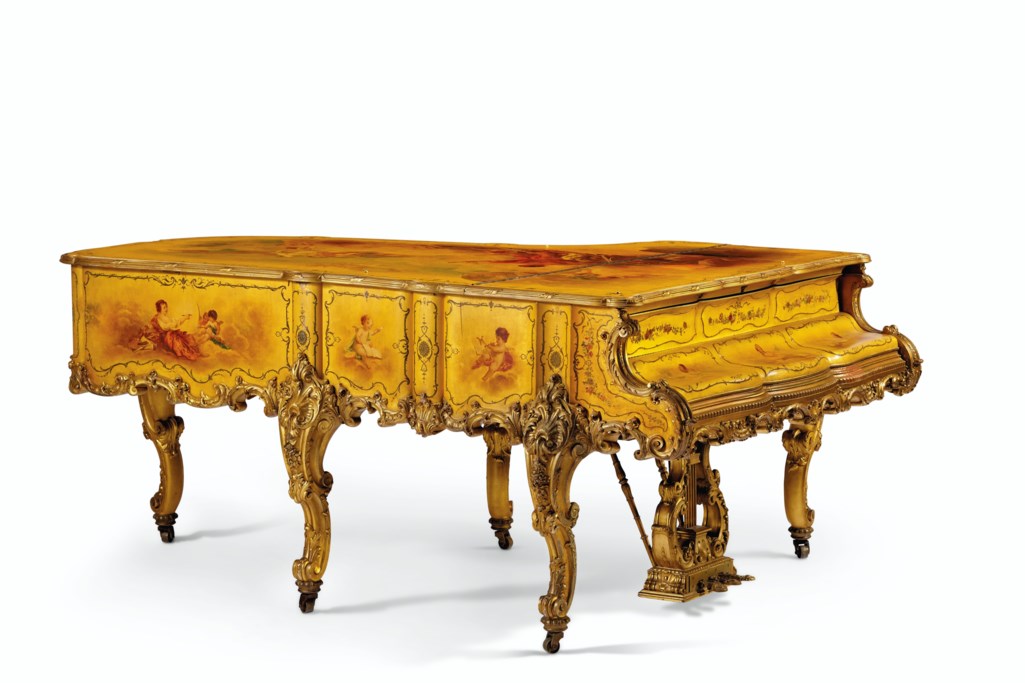 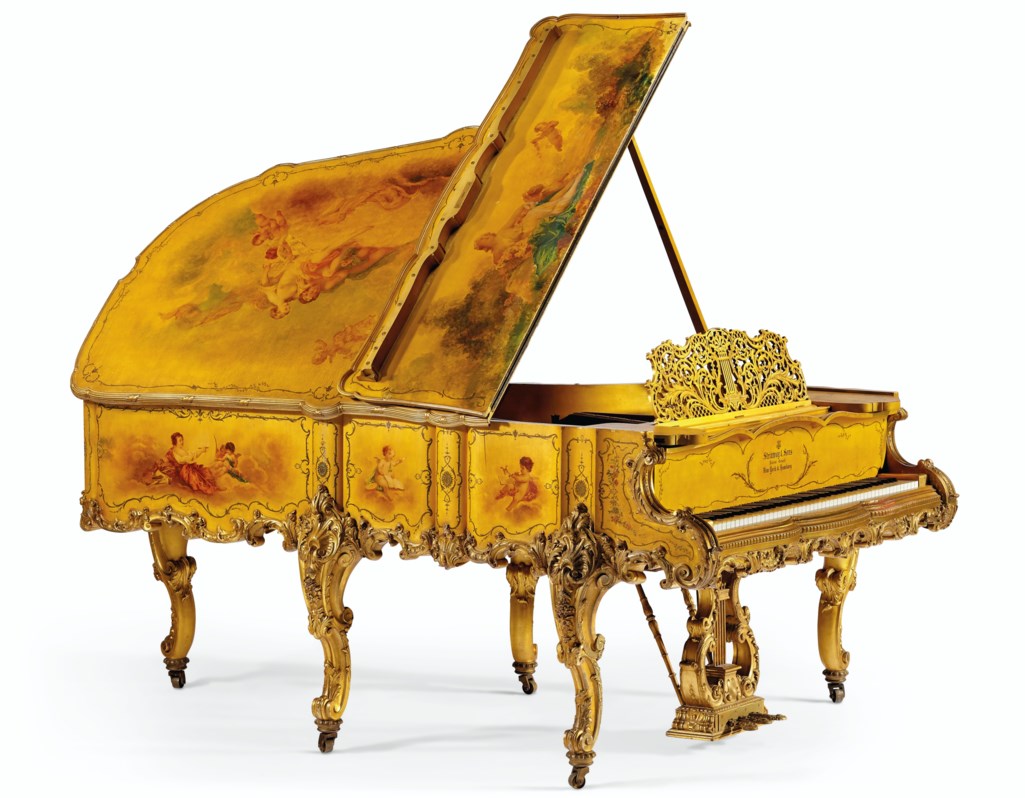 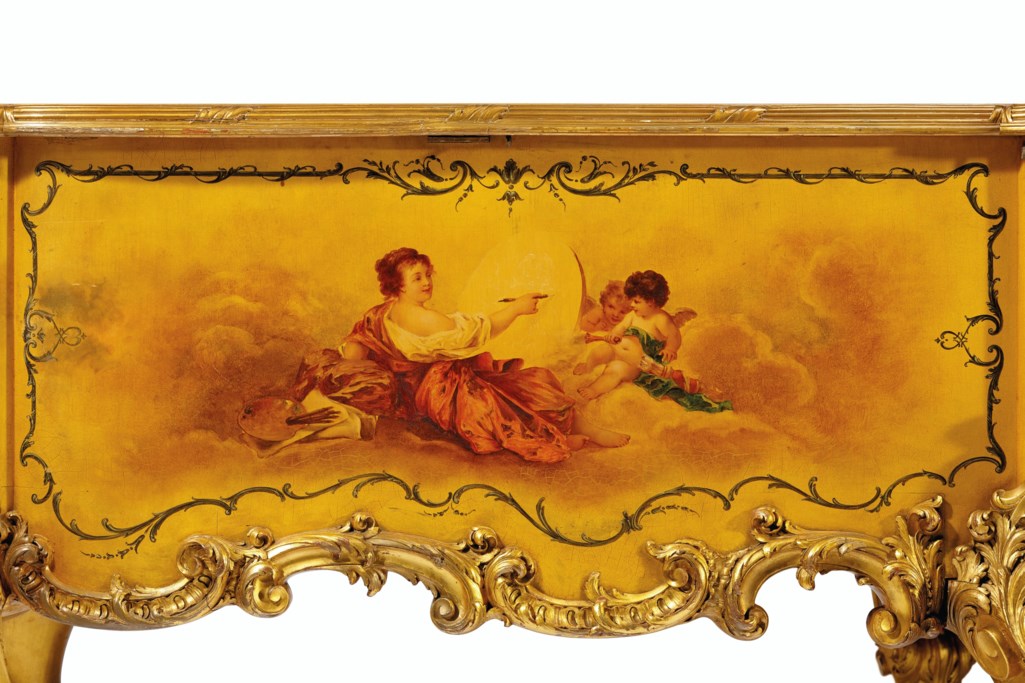 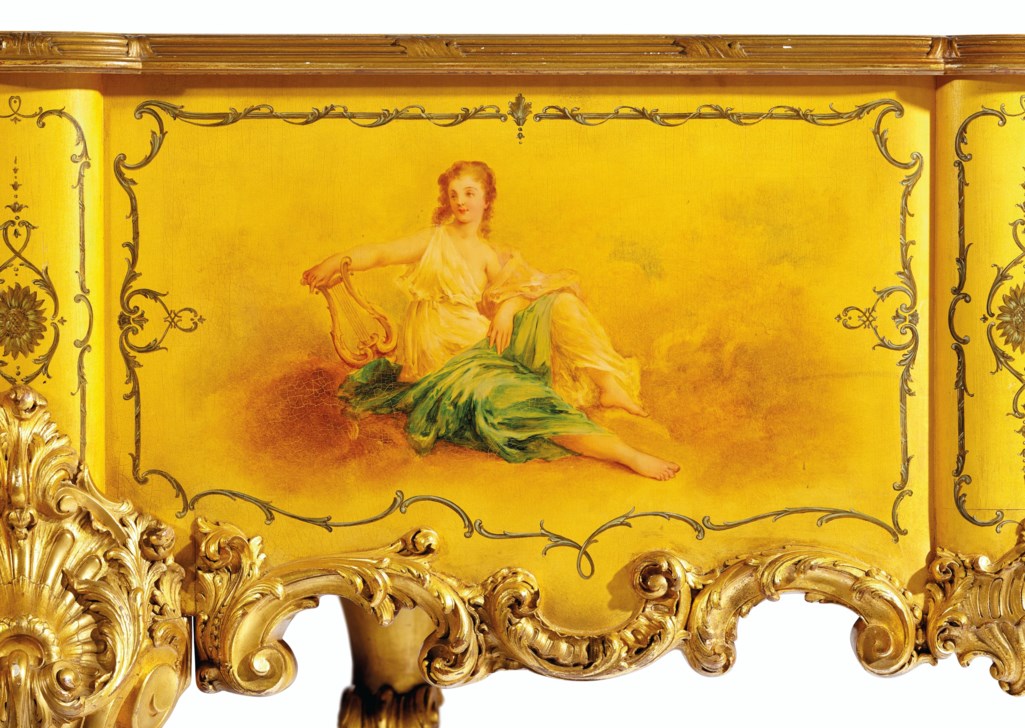 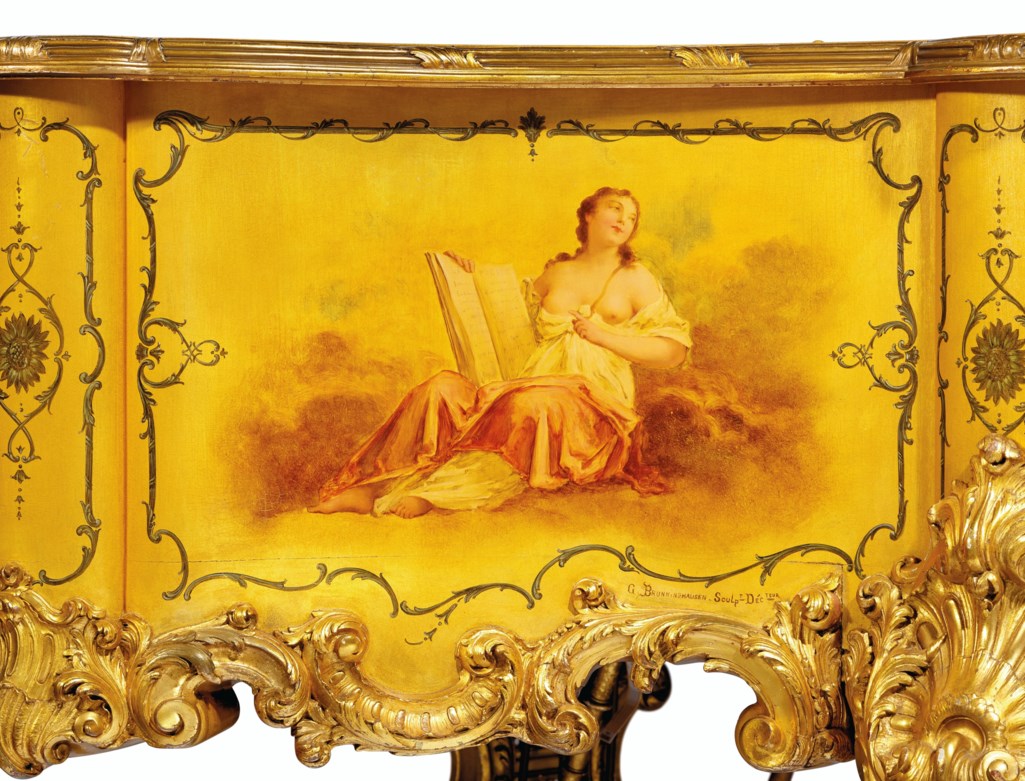 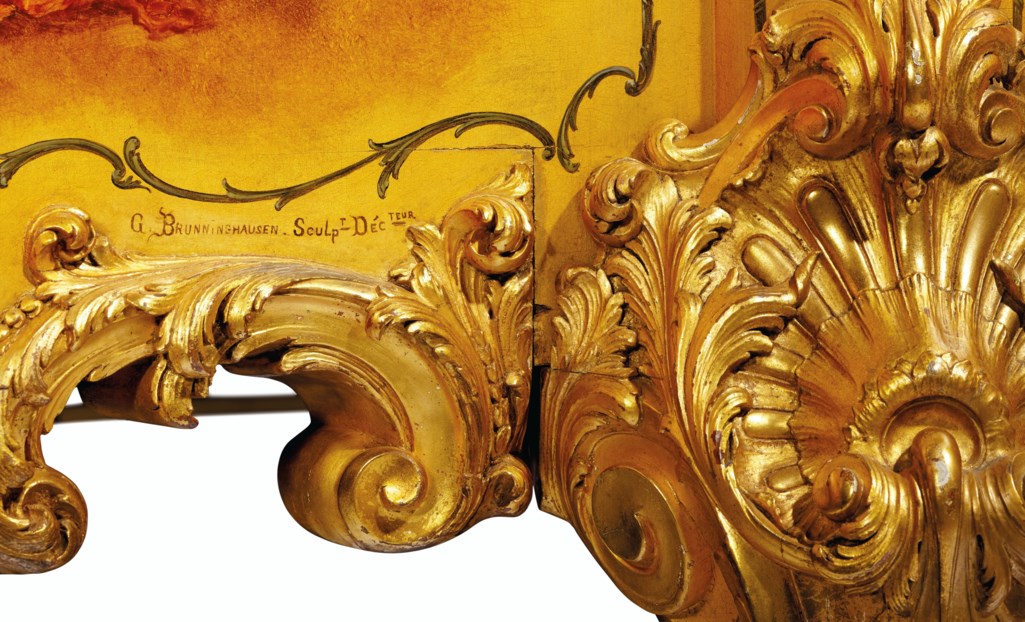 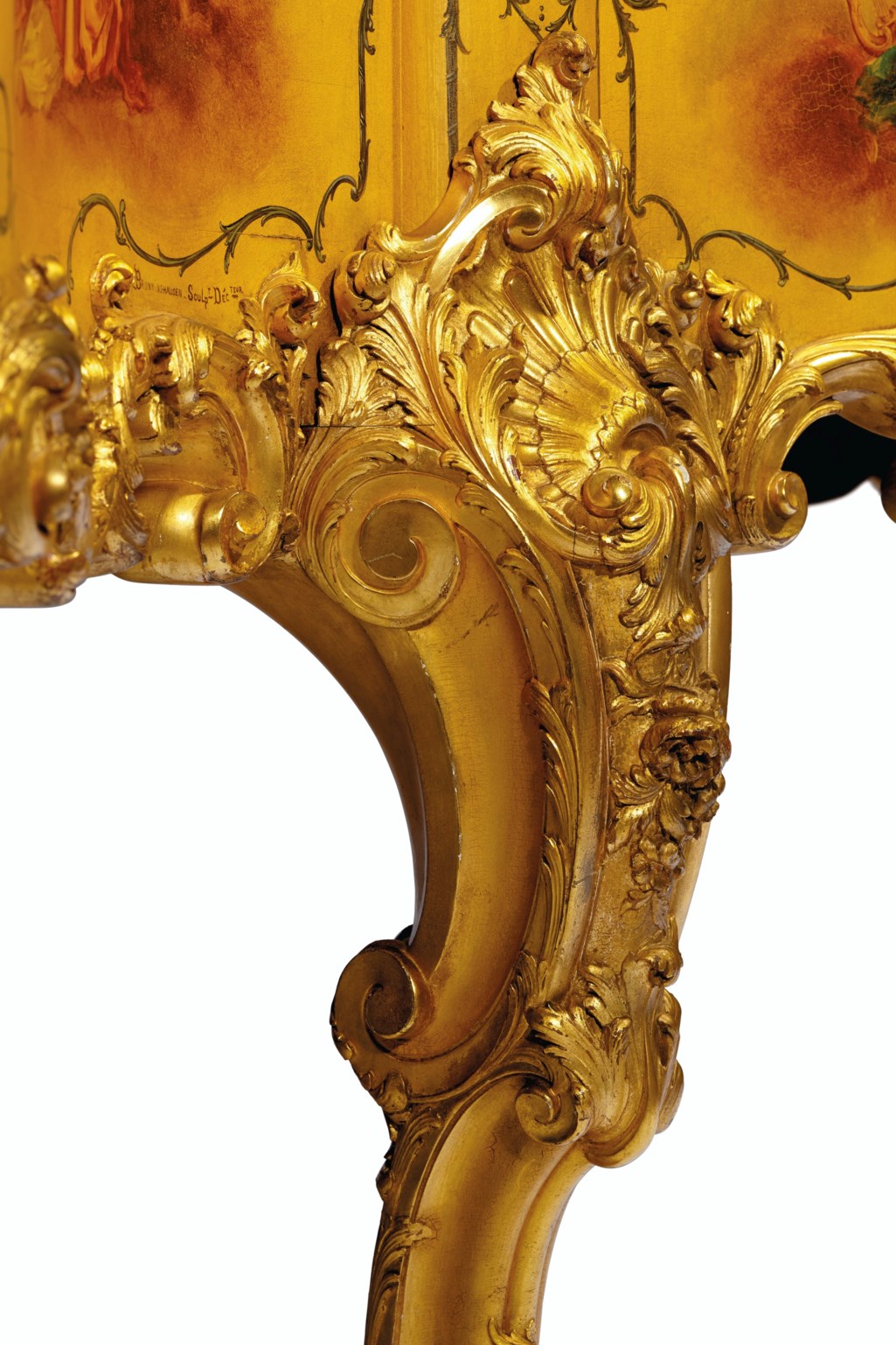 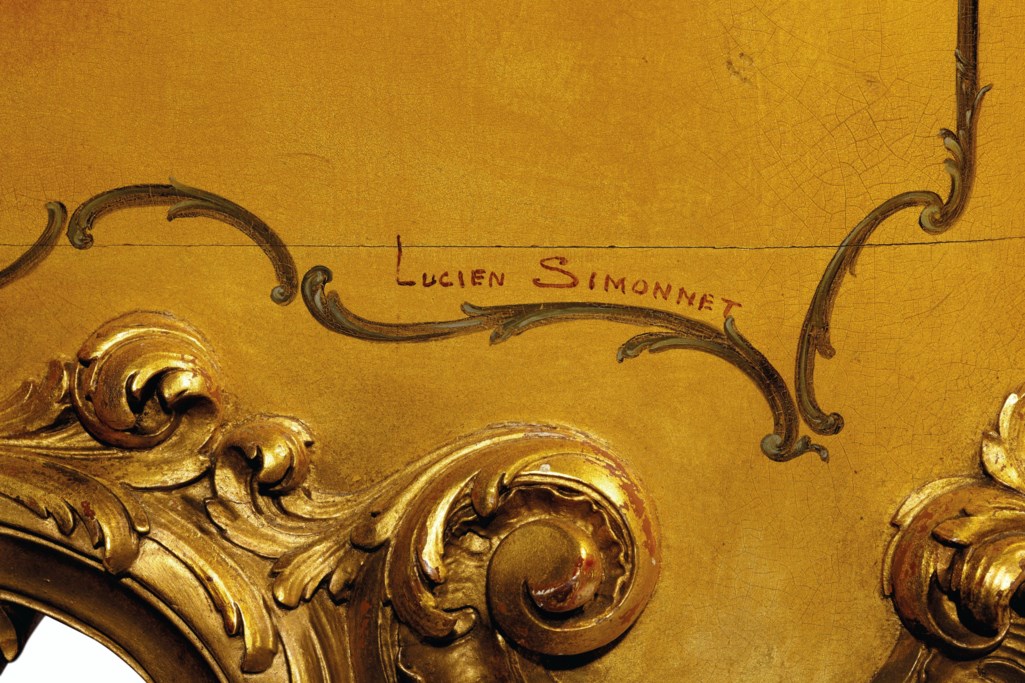 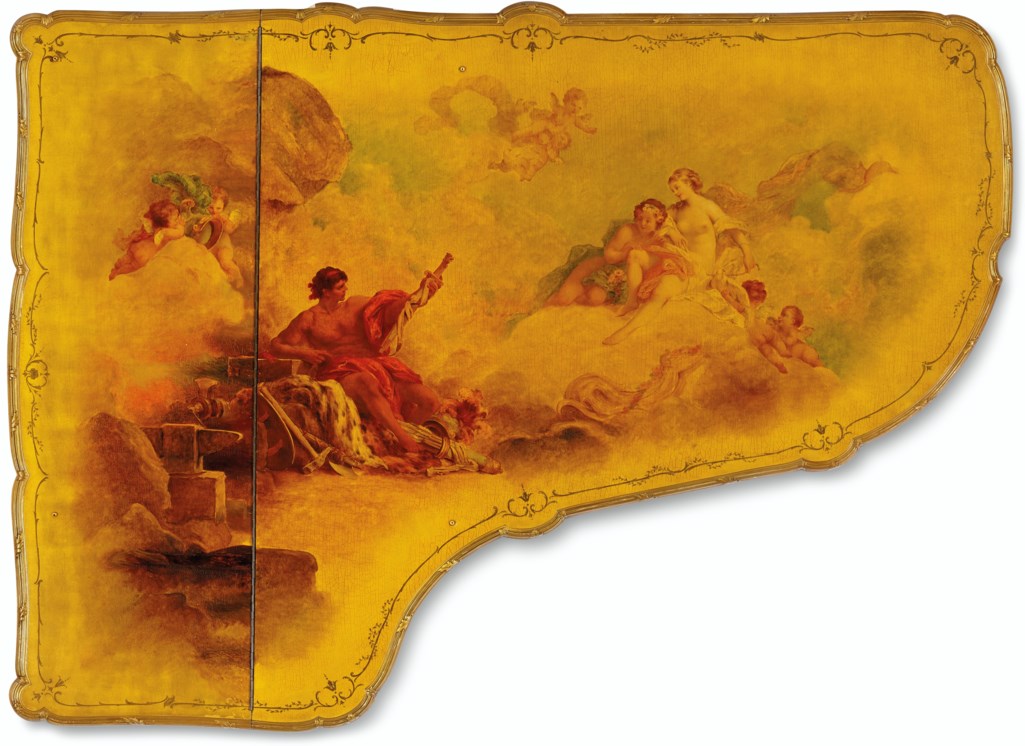 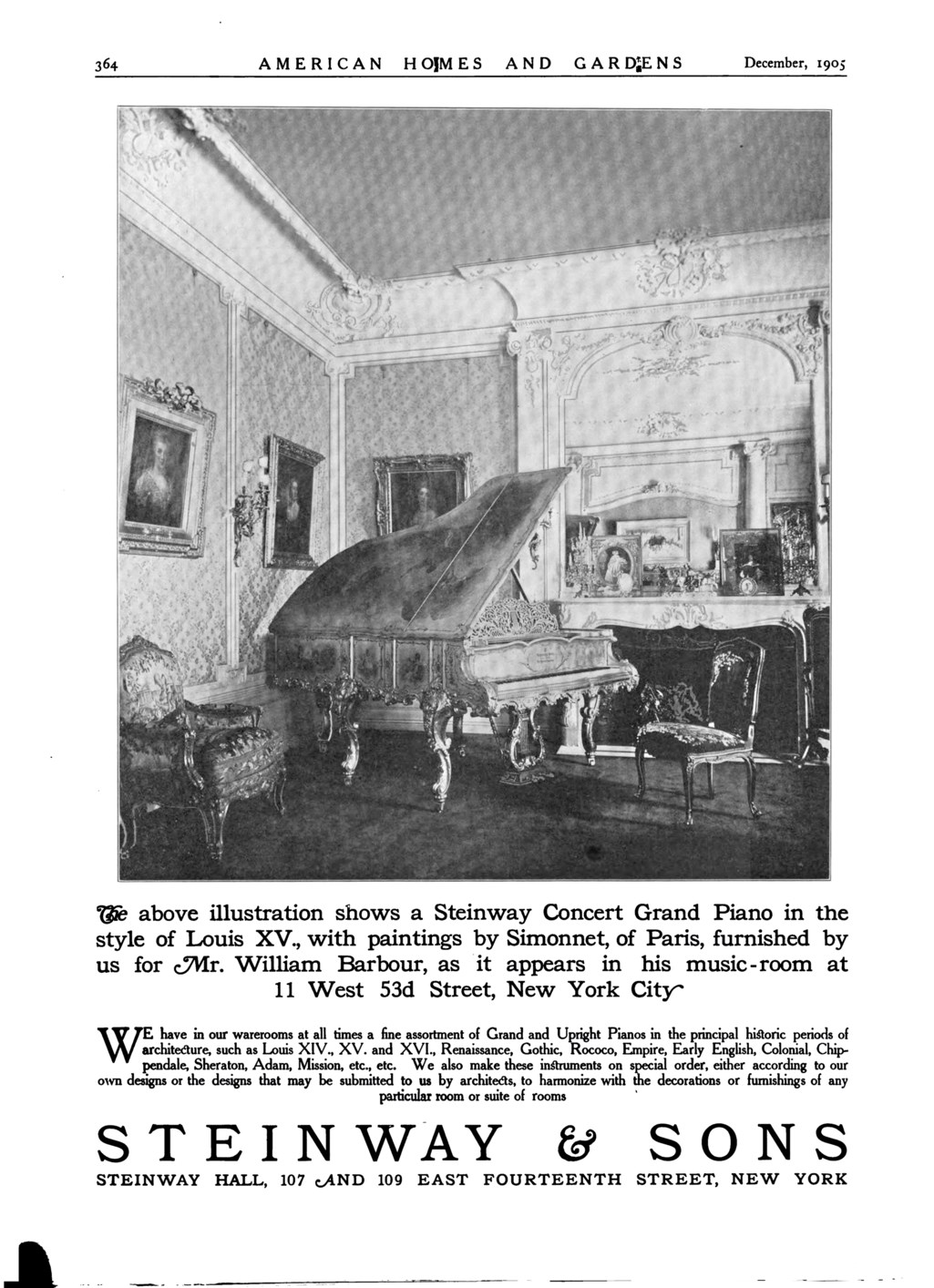 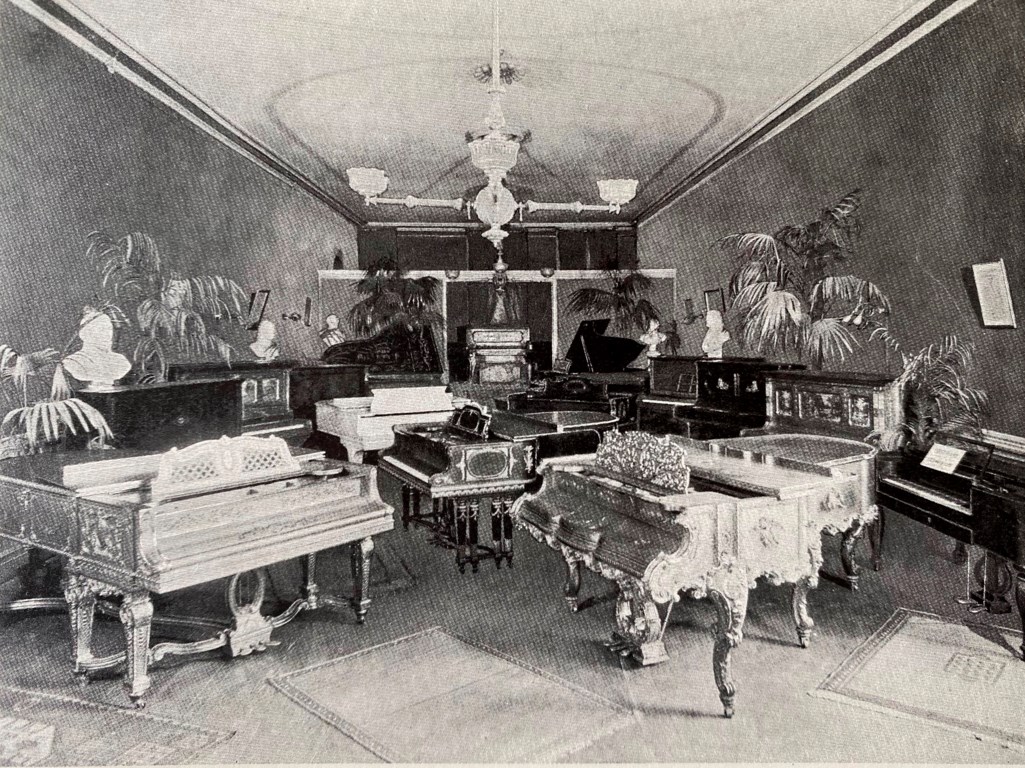 Previous Next
Lot 232 PROPERTY FROM A PRIVATE COLLECTION, OKLAHOMA
A FINE GILTWOOD AND VERNIS MARTIN GRAND PIANO
THE MOVEMENT BY STEINWAY & SONS, NEW YORK, SERIAL NO. 89678, THE CASE CARVED BY G. BRUNNINGHAUSEN AND PAINTED BY LUCIEN SIMMONET (1849-1926), CIRCA 1898
Estimate: USD 50,000 - USD 100,000
Condition report
Place your bid
Cost calculator
Or set your maximum bid below: 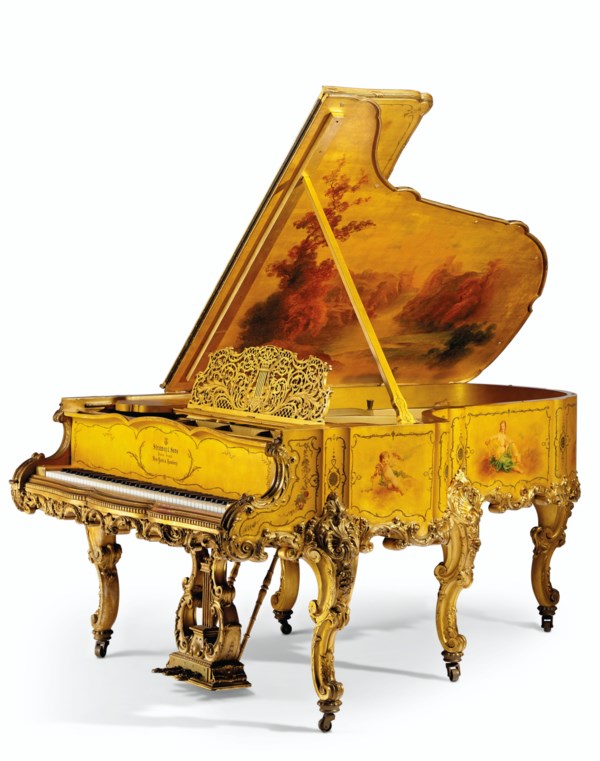 Lot 232
A FINE GILTWOOD AND VERNIS MARTIN GRAND PIANO
THE MOVEMENT BY STEINWAY & SONS, NEW YORK, SERIAL NO. 89678, THE CASE CARVED BY G. BRUNNINGHAUSEN AND PAINTED BY LUCIEN SIMMONET (1849-1926), CIRCA 1898
USD 50,000 - USD 100,000
A Christie's specialist may contact you to discuss this lot or to notify you if the condition changes prior to the sale.
View Report
The condition of lots can vary widely and the nature of the lots sold means that they are unlikely to be in a perfect condition. Lots are sold in the condition they are in at the time of sale.

The piano in overall very good condition and structurally sound when assembled. The vernis martin with expected light wear to areas of the painted top and underside of lid and depictions of the muses to the sides of the case, minor losses and rubbing to the gilt ground at the edges and corners at the front of the case, areas of the lid with visible areas of repolish. The top with intentional craquelure, though with small areas that have dulled. The giltwood carving with very minor losses to the gilding overall to be expected with age, handling, and use. One section of carving reattached to the top of the front left leg. The front right edge of the keyboard with losses to the gilding showing through to red bole beneath. Areas of loss to varnish to interior with repairs, one hinge previously off and reattached, with an associated surface break to the giltwood. Some very minor scuffs to the landscape painting on underside of lid alongside the hardware upon which the lid rests when closed.

Christie's cannot guarantee the playability of the Steinway action. We recommend interested parties consult a professional piano conservator to inspect the soundboard.

The hinged serpentine top painted with a scene of Venus at Vulcan's Forge after a version by François Boucher, the sides painted with muses emblematic of Arts and Music, the underside of the top painted with an idyllic landscape with a castle and flower bearing Bacchante, on five profusely-carved cabriole legs, with pierced musicstand and lyre-form pedal, the right side of case signed 'G. BRUNNINGHAUSEN. ScuLpr DÉCTEUR' and 'LUCIEN SIMONNET', with 'Steinway & Sons / Patent Grand / New York & Hamburg' above the keyboard, the movement with Steinway patents
401⁄2 in. (103 cm.) high, 71 in. (180.5 cm.) wide, 95 in. (241.5 cm.) deep, closed
85 in. (216 cm.) high, open

Founded in New York in 1853, Steinway & Sons produced what can be considered their first art-case grand piano in 1857 with lavishly carved case and legs. Though this first piano, and many after, were decorated by artisans outside of the company, many art case pianos came to be produced or designed in house by the Steinway Art Department, officially established by 1897 under the direction of Joseph Burr Tiffany until 1913. While 'fancy' pianos produced around the turn of the century often mimicked popular furniture styles of the time - particularly Louis XIV, XV, and XVI - instruments were made to fit any interior, employing materials such as ormolu, exotic woods, lacquer, leather and brass to achieve their elaborate designs. Steinway & Sons art-case pianos grew to become status symbols in fashionable American society, with examples gifted to the White House, shown in international exhibitions, and in the mansions of New York's social elite.

Though the exact commission cannot be confirmed, the present lot appears in the collection of Col. William L. Barbour (d. 1917) and Julia Adelaide Barbour at 11 & 13 West 53rd Street, New York by 1904. According to the Steinway Archives the present lot corresponds to a 'New York Grand Piano Model C “Fancy Case” 7¼ octaves (88 notes), and length of approximately 7’ 5” with an approximate net weight of 900 pounds, completed in manufacturing in 1898.' The piano was sent to Paris for 'decoration (Louis XV) and designated “Fancy with paintings, all gilt, richly carved” and sold to an undisclosed customer on 8 March 1901'. Prior to delivery at Barbour's residence on 8 February 1904, it is assumed the piano was acquired directly from Steinway New York, as the instrument features prominently in a showroom image of Steinway's Union Square stock (see R. Ratcliffe, Steinway, San Francisco, 1989, p. 51).

William Barbour was born in New York City in September 1857. Barbour’s father, Thomas Barbour, had emigrated to America in 1840 and founded the Barbour Flax-Spinning Company in Paterson, New Jersey, following in his own father John Barbour’s footsteps, who had established a flax spinning mill and linen thread manufacturing factory in Ireland. Barbour moved with his family to live more permanently in Paterson, NJ where he attended private school, before spending three years traveling Europe upon graduation. Barbour returned to Paterson where he joined the family business, eventually becoming president of the Linen Thread Company, the Barbour Brothers Company, the Paterson Central Electric Railway and the Trust Company of America, and director of thirteen other companies by the end of the 19th century. In addition, Barbour was appointed a member of New Jersey governor John Grigg’s personal staff in 1896, earning him the title of Colonel.

While retaining a summer home in New Jersey, in 1901 Barbour and his wife, Julia Adelaide Sprague whom he married in 1883, hired architect C.P.H. Gilbert to design a townhouse in Manhattan at 11 & 13 West 53rd Street. Completed in 1903, this six story townhouse was full of luxury fittings including a mantle and fireplace in the drawing room taken from an Italian villa, medieval tapestries, old masters and sculptures, and antique furniture. In addition to the piano presented here, as shown in a Steinway & Sons advertisement in the December 1905 issue of American Homes & Gardens, Barbour acquired a second piano for the music room in 1903, a Steinway & Sons piano designed and decorated by the celebrated British artist Sir Lawrence Alma-Tadema in 1884 for the music salon in the home of New York businessman Henry Gurdon Marquand. This piano was sold at Christie’s London, 7 November 1997, lot 86, where it achieved a record £716,500, and is now in the collection of the Clarke Art Institute in Williamstown, Massachusetts.

Barbour died suddenly in March of 1917 of heart disease. Upon the death of Julia Adelaide Barbour in 1923, the contents of the home, including the pianos, were sold in an estate auction held by the American Art Association, where the piano presented here went for $800. The townhouse was eventually purchased by John D. Rockefeller Jr. whose own townhouse on 54th street was directly behind the Barbour’s. In May of 1932 the townhouse was leased to the new Museum of Modern Art, before it was eventually torn down to make room for the present museum building.