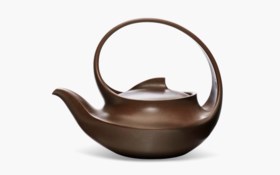 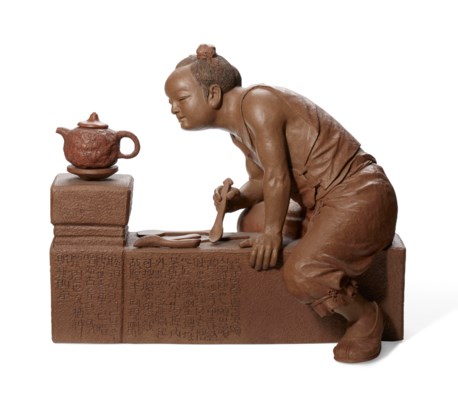 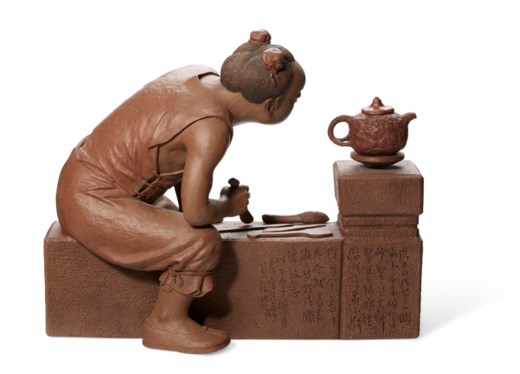 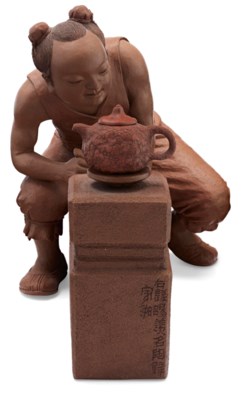 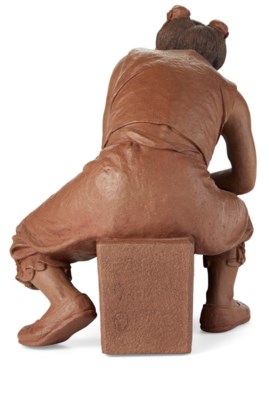 Previous Next
Lot 50 THE COLLECTION OF FLORENCE AND HERBERT IRVING
A YIXING MODEL OF A POTTER, 'GONG CHUN AT WORK'
XU XIUTANG (B. 1937), DATED 1996
Estimate: USD 10,000 - USD 15,000
LOT HAS ENDED
Condition report
Confirm Your Bid
Cost calculator
Or set your maximum bid below:

Lot 50
A YIXING MODEL OF A POTTER, 'GONG CHUN AT WORK'
XU XIUTANG (B. 1937), DATED 1996
USD 10,000 - USD 15,000
A Christie's specialist may contact you to discuss this lot or to notify you if the condition changes prior to the sale.
View Report
The condition of lots can vary widely and the nature of the lots sold means that they are unlikely to be in a perfect condition. Lots are sold in the condition they are in at the time of sale.

The earliest known Yixing potter from the Ming dynasty, Gong Chun, shown seated on a bench in front of a burl-form teapot; the bench inscribed with a long inscription describing the story of Gong Chun and incorporating the artist's signature and a cyclical year bingzi (1996), the back of the bench with two artist's seal marks, 'Xiu' and 'Xiutang'
6 in. (15.2 cm.) across

The Irving Collection, no. 79Y.

Gong Chun from the late Ming dynasty, early 16th century, shown in the present pottery model, is a potter regarded as the ancestral maker of Yixing teapots and the first known and documented Yixing pottery artist from the late Ming dynasty in the early 16th century. A teapot attributed to Gong Chun, widely known as the “Gong Chun Shuyin” (tree burl) teapot, is now in the collection of the National Museum of China. The miniature teapot resting on the platform in front of Gong Chun is modeled after the “Gong Chun Shuyin” teapot. Similarly designed pottery models of Gong Chun by Xu Xiutang are illustrated by Xu Xiutang himself in Zhongguo Zisha (Chinese Purple Clay), Shanghai, p. 24, and in Selected Works of Contemporary Yixing Potters, Hong Kong, 1994, p. 14, no. 1.