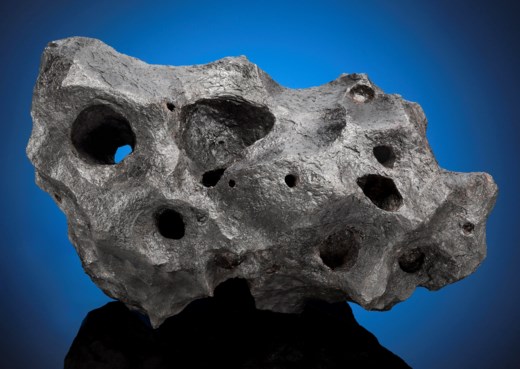 Lot 41
MATCHLESS CANYON DIABLO METEORITE — NATURAL SCULPTURE FROM OUTER SPACE
Iron — Coarse octahedrite IAB-MG Meteor Crater, Coconino County, Arizona (35°3' N, 111°2' W)
USD 150,000 - USD 250,000
A Christie's specialist may contact you to discuss this lot or to notify you if the condition changes prior to the sale.
View Report
The condition of lots can vary widely and the nature of the lots sold means that they are unlikely to be in a perfect condition. Lots are sold in the condition they are in at the time of sale.

Overall in excellent condition. Please note that weights and dimensions are approximate only and that the appearance and surfaces of meteorites might change if not appropriately cared for. Proper handling and correct humidity control are easy to accommodate and will ensure condition is maintained, please contact the department if you would like further advice on how to live with meteorites in your collection.

An uncommon smooth metallic surface delimits a somewhat ellipsoidal metallic abstract form. Numerous sockets and perforations abound in a very-rarely-seen proximity. Wrapped in a gunmetal patina with splashes of cinnamon and platinum-hued accents, this is among the most aesthetic iron meteorites known.
344 x 203 x 184mm. (13½ x 8 x 7¼in.)

Like all iron meteorites, the current offering is more than four billion years old and originated in the asteroid belt between Mars and Jupiter. Evocative of a Henry Moore, this sculptural form was once part of the molten iron core of an asteroid that broke apart—a portion of which was deflected into an Earth-intersecting orbit. It was approximately 49,000 years ago that it plowed into the Arizona desert with the force of more than 100 atomic bombs. Fragments were ejected more than 11 miles away from the point of impact and the main mass vaporized, creating the most famous and best-preserved meteorite crater in the world—the renowned Meteor Crater near Winslow, Arizona nearly one mile across and 600 feet deep. The fragments of iron that survived the impact are referred to as Canyon Diablos (“Canyon of the Devil”), and they are the quintessential American meteorite prized by museums and private collectors everywhere.

The Canyon of the Devil became precisely that for one Daniel M. Barringer. At the turn of the 20th Century, Barringer reasoned that the crater had to be created by an enormous extraterrestrial mass weighing millions of tons. He believed this mass, worth a fortune in nickel and iron, lay under the crater’s base. In 1903 Barringer filed a mining claim and commenced a drilling operation that went on for years. Unfortunately for Barringer, scientists later determined that a mass much smaller than what Barringer believed existed would possess sufficient energy to blow the huge hole in the desert floor—and would also generate enough heat to vaporize much of itself. In effect, what Barringer spent the last decades of his life looking for didn’t exist—but this extraordinary meteorite does, as does the best-preserved meteorite crater on Earth. The Barringer Family maintains the crater and adjacent museum today in what is a major international tourist attraction not to be missed by any reader.

Canyon Diablos are noted for containing nodules of graphite and carbonados (minute black diamonds). In the specimen now offered, it was the ejection of the graphite inclusions that resulted in the sculpting of sockets or hollows in the mass. In a process referred to as terrestrialization, these sockets expanded in size when exposed to Earth’s elements as the seasons turned over tens of thousands of years. Some of these hollows expanded sufficiently to entirely penetrate the mass resulting in the sought-after rarity of a naturally formed hole. This meteorite has seven such complete holes, perhaps the most of any single iron meteorite.

Christie's would like to thank Dr. Alan E. Rubin at the Institute of Geophysics and Planetary Physics, University of California, Los Angeles for his assistance in preparing this catalog note.