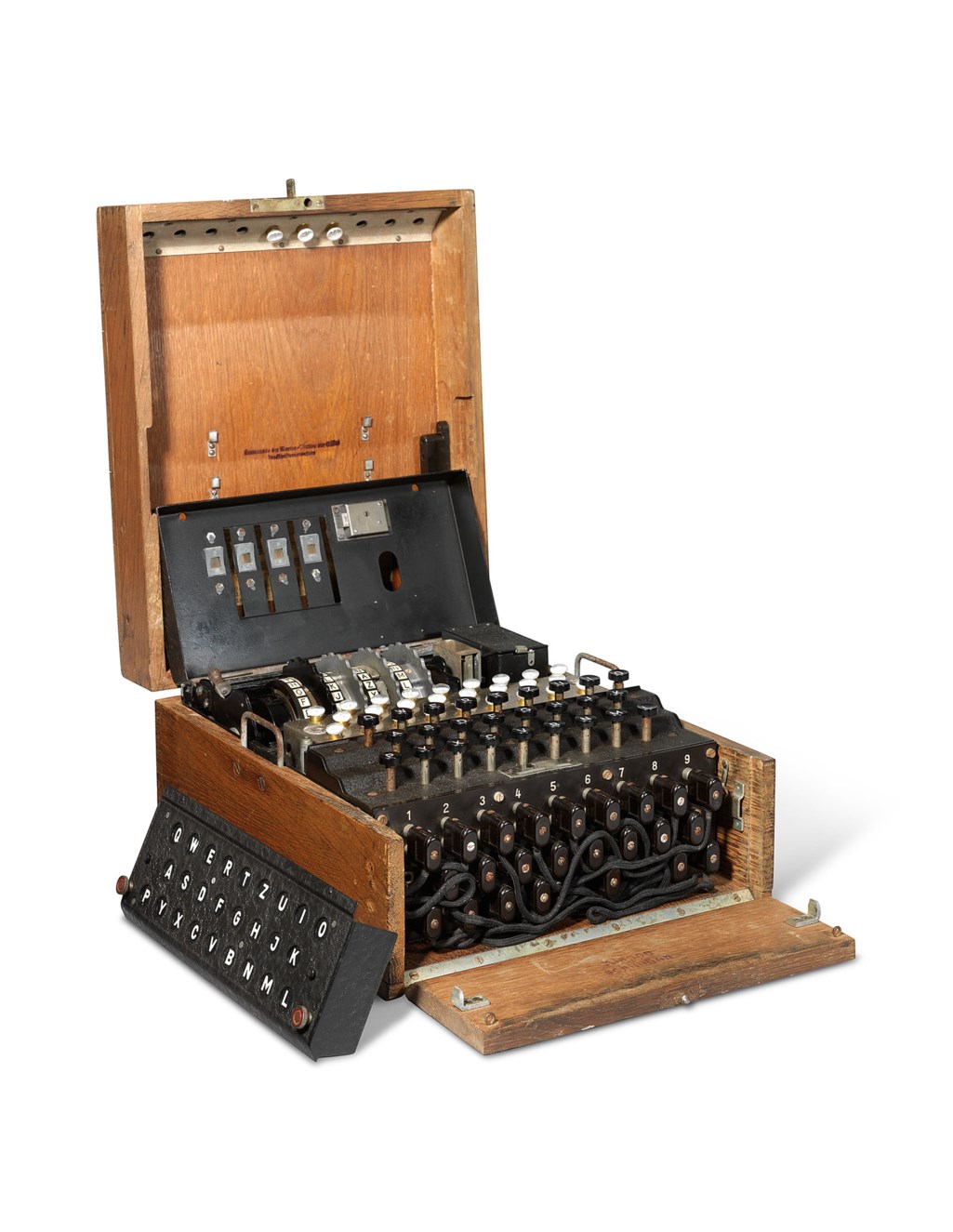 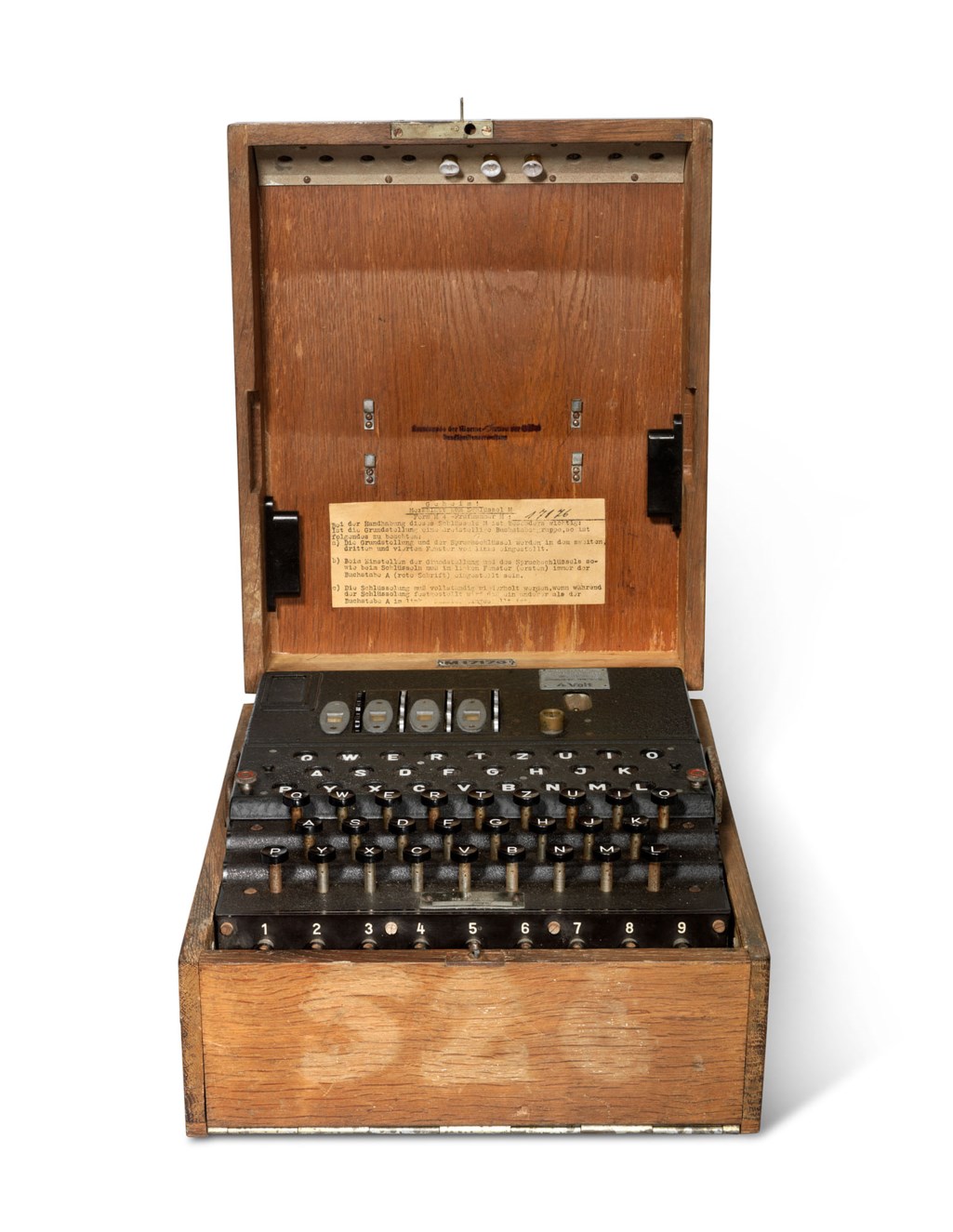 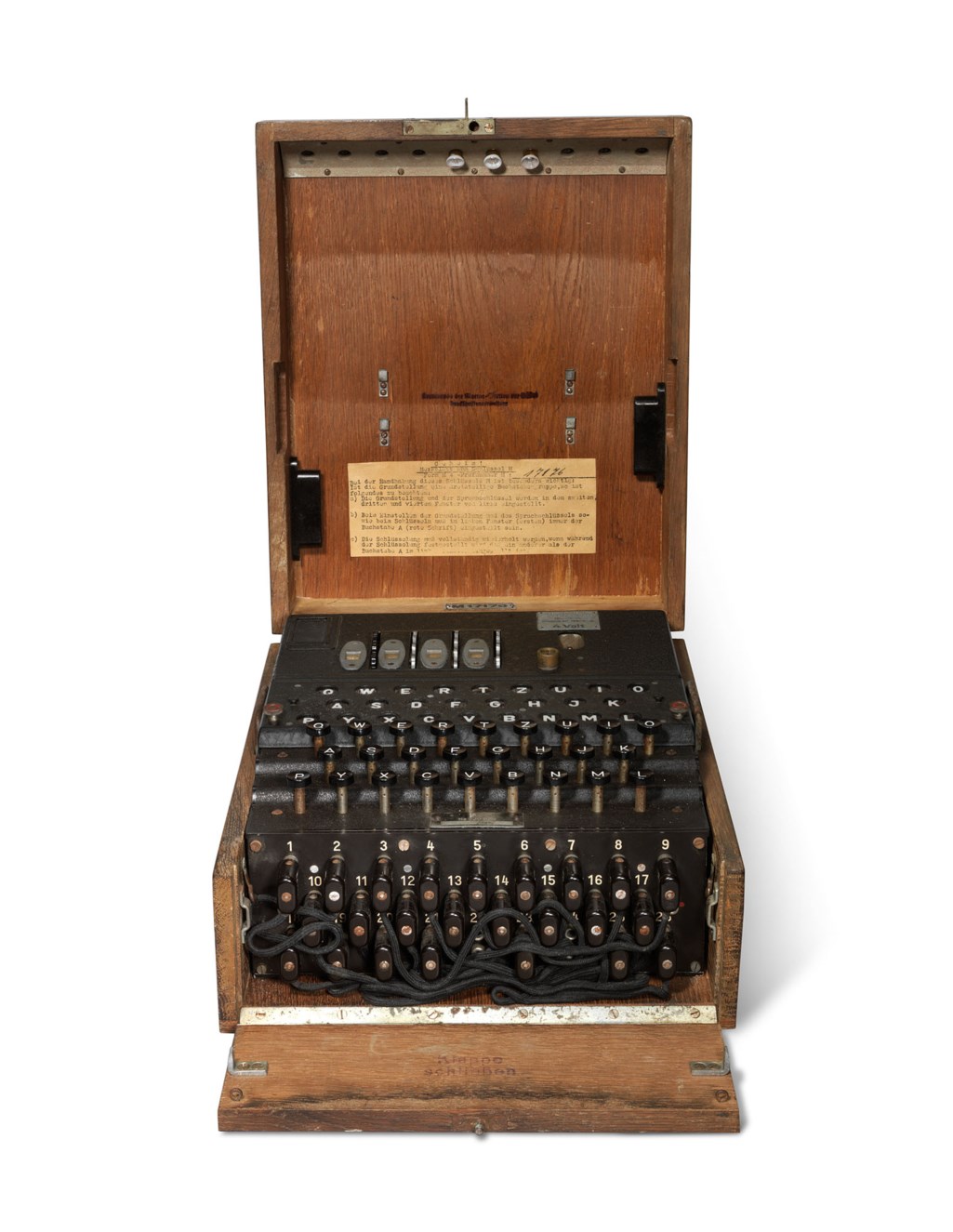 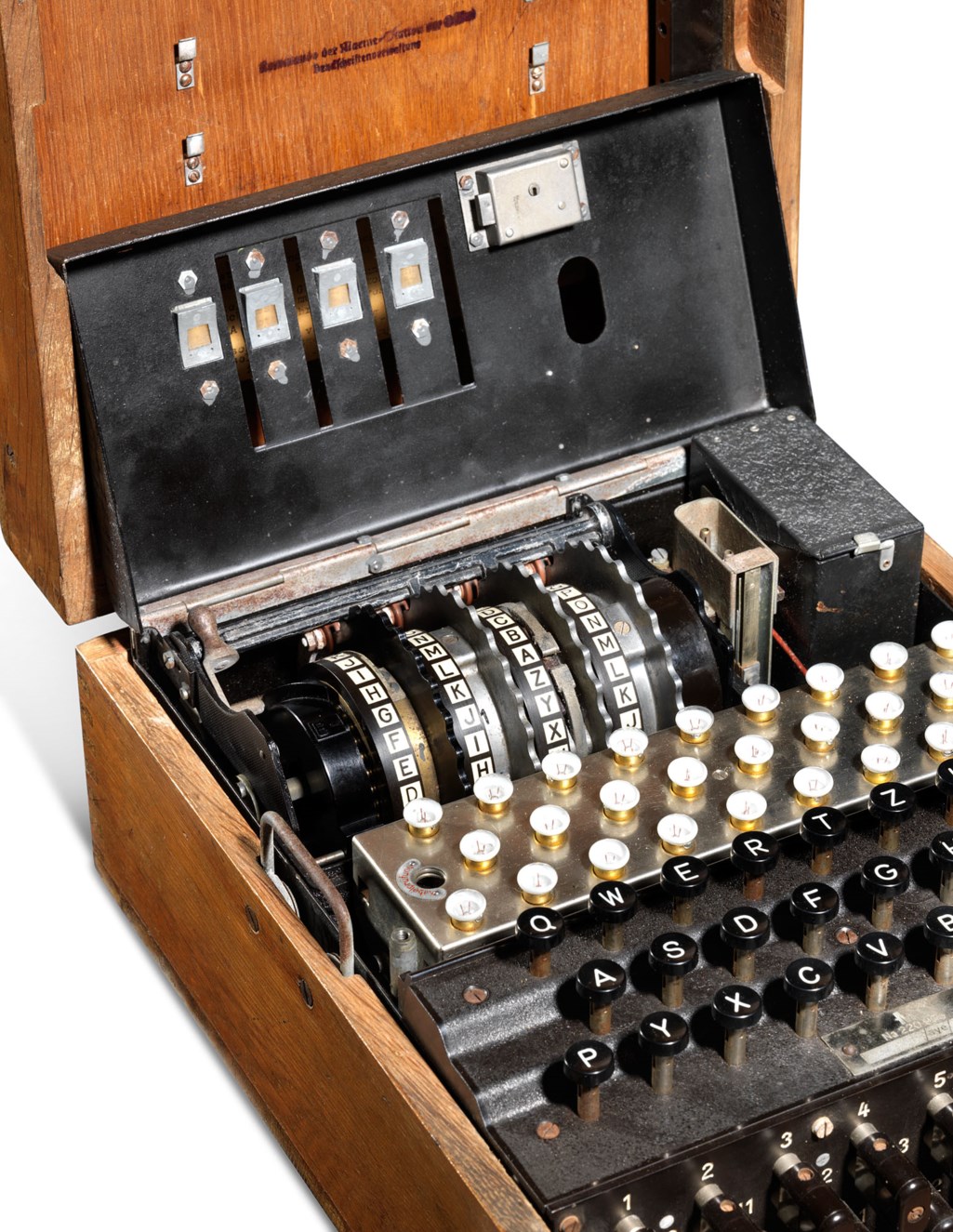 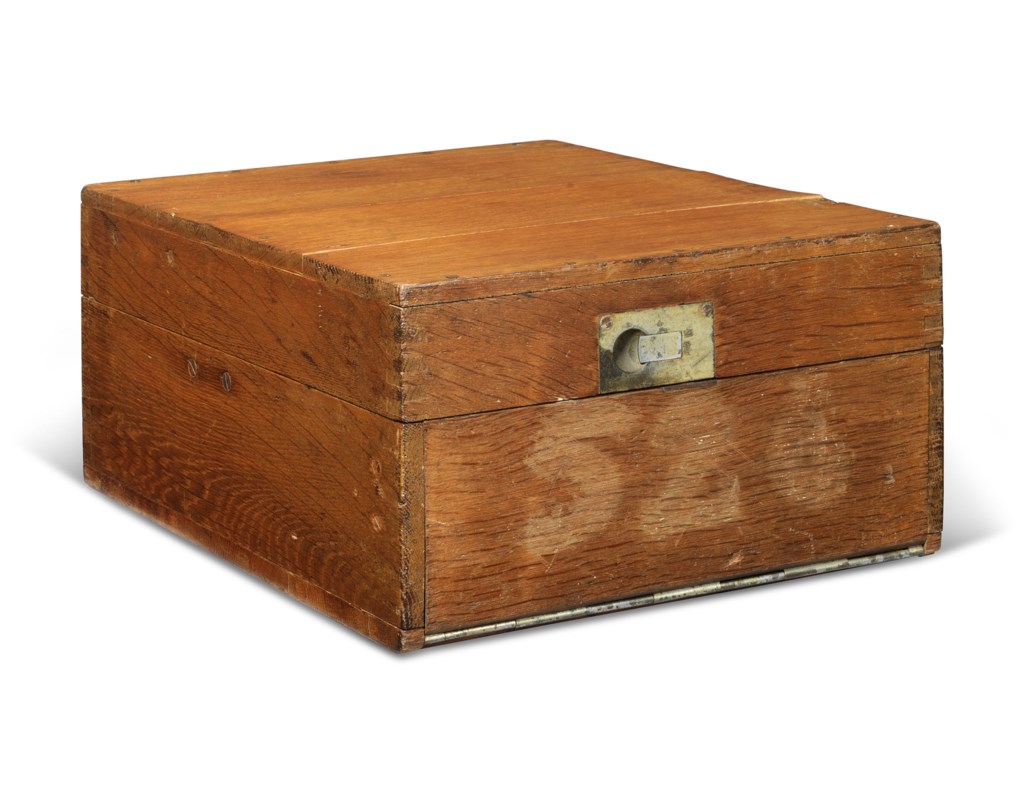 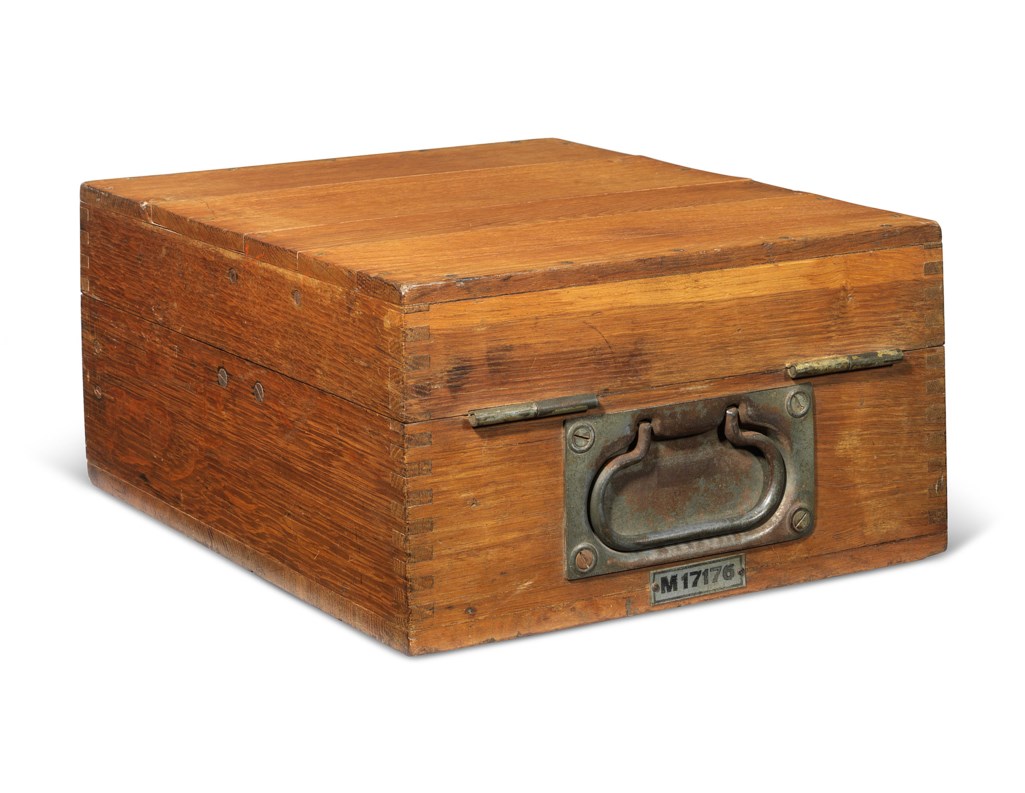 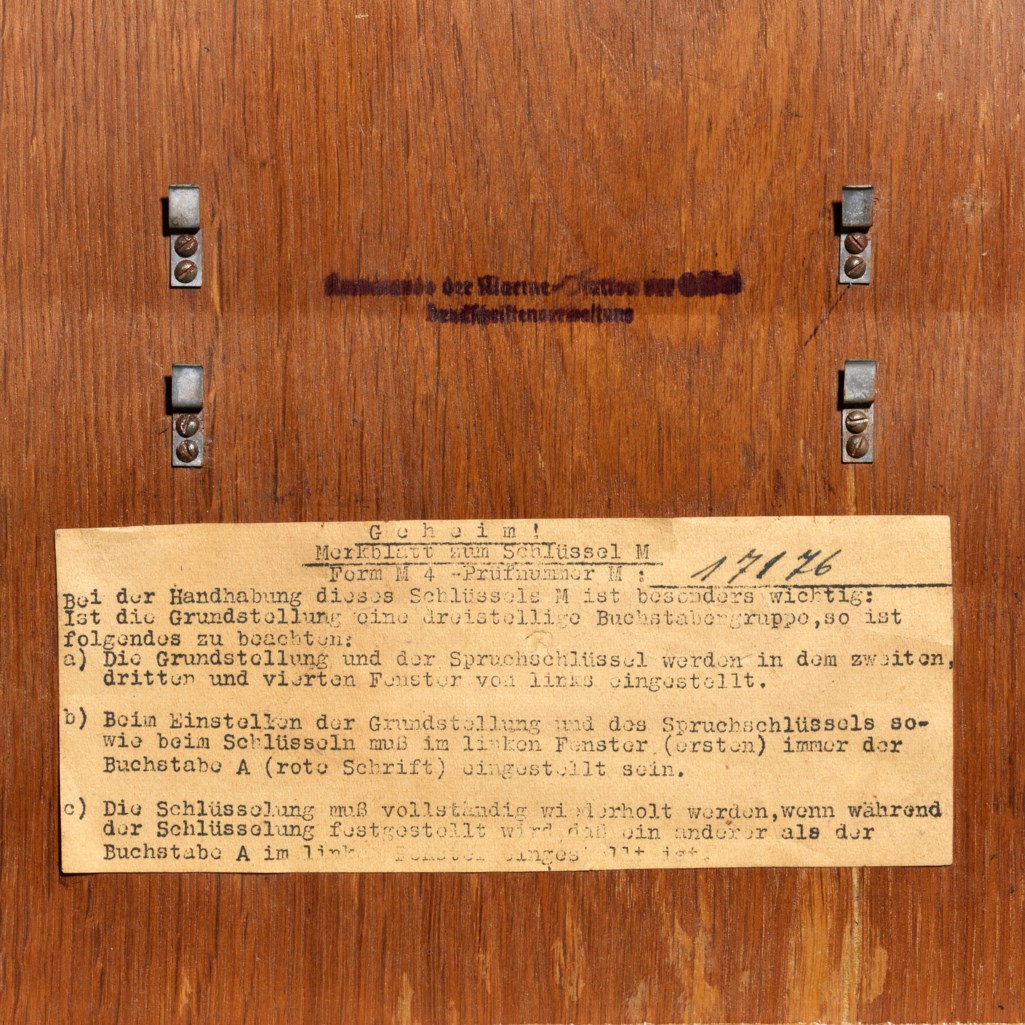 Place your bid
Place your bid
Bid Not Placed
You’ve saved this lot to your account.
Click here to view this lot in your account.
Confirm your age
Please confirm by ticking the box
Sorry, we are unable to retrieve current bid activity for this lot.
Please check your internet connection.
We will update the current bid activity for the lot as soon as connectivity is restored.
Condition report
Sale 18958
Eureka! Scientific breakthroughs of the 20th century
Online 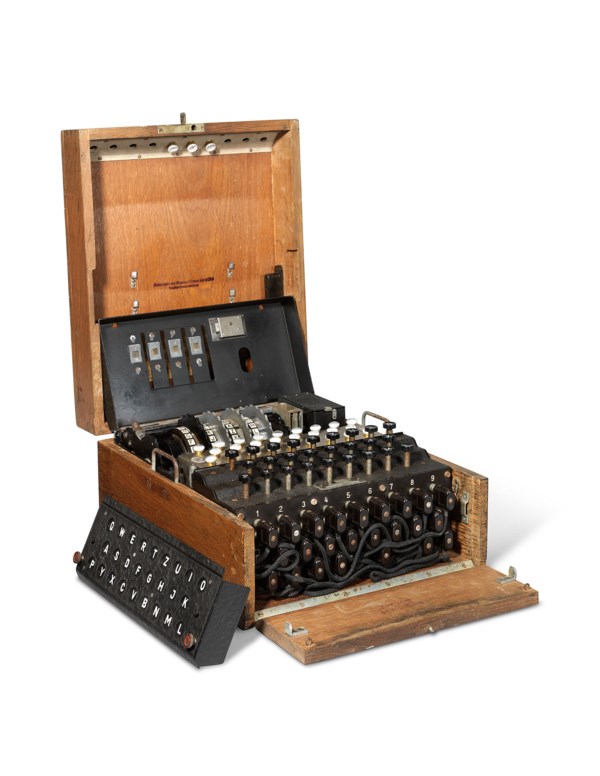 Lot 22
A Second World War Enigma Machine
Olympia Büromaschinenwerke. 1944
GBP 200,000 - GBP 300,000
A Christie's specialist may contact you to discuss this lot or to notify you if the condition changes prior to the sale.
View Report
The condition of lots can vary widely and the nature of the lots sold means that they are unlikely to be in a perfect condition. Lots are sold in the condition they are in at the time of sale.

Overall in very good condition, noting some minor corossion to metal levers, but not seemingly to affect working mechanism. (No power supply thus the elecrtics not tested, but the rotor mechanism activating fine.) The rotors stubbornly snug in the machine and we have not attempted to remove them with exessive force. Slight corrosion to pins of patch leads. The bulbs all flat top facsimiles.

One of the rarest and hardest Enigmas to decrypt; Allied efforts to break the M4, under the leadership of Alan Turing and Joe Desch, led to the development of the first programmable computer. Early in World War II, Karl Dönitz, head of Germany’s U-boat fleet, had concerns over repeated Allied successes against his submarines. Despite the fact that the Allies were by then regularly reading messages coded by earlier versions of the Enigma, German investigators determined that it was impossible for the Allies to read Enigma messages. It was thought that the Allies had used espionage, or radar, or simply had chanced upon the submarines. Nevertheless Dönitz ordered the development of a special 4-rotor Enigma for use by the German Navy's U-boat fleet. The machine’s use of 4 rotors, instead of 3, and the operator’s ability to select these from a pool of 8 interchangeable rotors, together with stricter operating procedures, gave the M4 Enigma a much higher level of encryption. For 10 months – a long time in war – the M4 defeated the previously successful decryption of Allied codebreakers.

So confident was Dönitz in the M4 Enigma that, in his later trial at Nuremberg, he declared that the Allies could not possibly have deciphered his Enigma messages; instead he attributed the destruction wreaked upon his fleet to advanced radar and direction finding alone. However, mathematicians and engineers under the leadership of Alan Turing at Bletchley Park, and of Joe Desch in Dayton, Ohio, had used information and ideas developed by brilliant Polish mathematicians to create what many call the world’s first programmable computers to defeat the M4 Enigma code. By mid-1943 the majority of M4 Enigma messages were being read by the Allies, but it was not until the 1970s that knowledge of the Allied successes against the Enigma was made public. The significant role that the M4 Enigma and that Allied codebreaking played in the Battle of the Atlantic has become increasingly well known as historians have revisited the history of WWII in the light of recently declassified information.

It is thought that fewer than 100 M4 Enigmas survived the war: they were produced in much smaller quantities than the 3-rotor machines, and since the majority were deployed on U-boats most were lost when the submarines were sunk in combat or scuttled by their crews at the end of the war. This M4 Enigma was probably used at a command and communications facility on shore because it does not have the corrosion characteristic of Navy Enigma machines used at sea. Towards the end of hostilities German troops were ordered to destroy their Enigmas rather than let them be captured by advancing Allied forces; and after the war Churchill ordered all remaining Enigmas destroyed to help preserve the secret of Allied decoding successes at Bletchley Park. These factors explain why Enigmas are so rare and of such interest to collectors and historians.

The engineering company which owned the patents for Enigma machines was founded by Arthur Scherbius and named Chiffriermaschinen AG. In 1933, when the German military bought the company to secure the patents, it was renamed Heimsoeth und Rinke. The company designed and marketed Enigma machines which it then arranged to have manufactured by third parties. This Enigma was manufactured in Erfurt, Germany, in 1944 by Olympia Büromaschinenwerke AG. Olympia Büromaschinenwerke AG, commonly known as the Olympia Typewriter Company, was founded in 1903, and produced various items for civilian and military use. The company survived the war but went out of business in 1992 as computers replaced the need for typewriters.