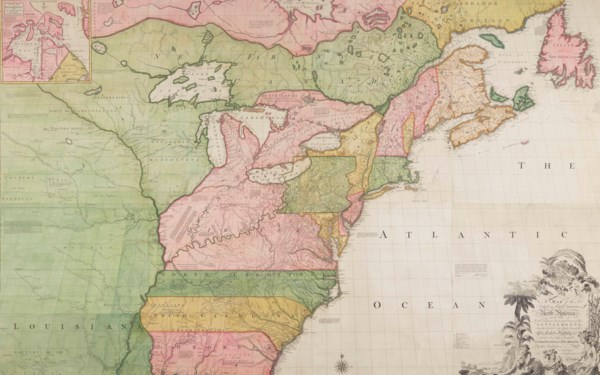 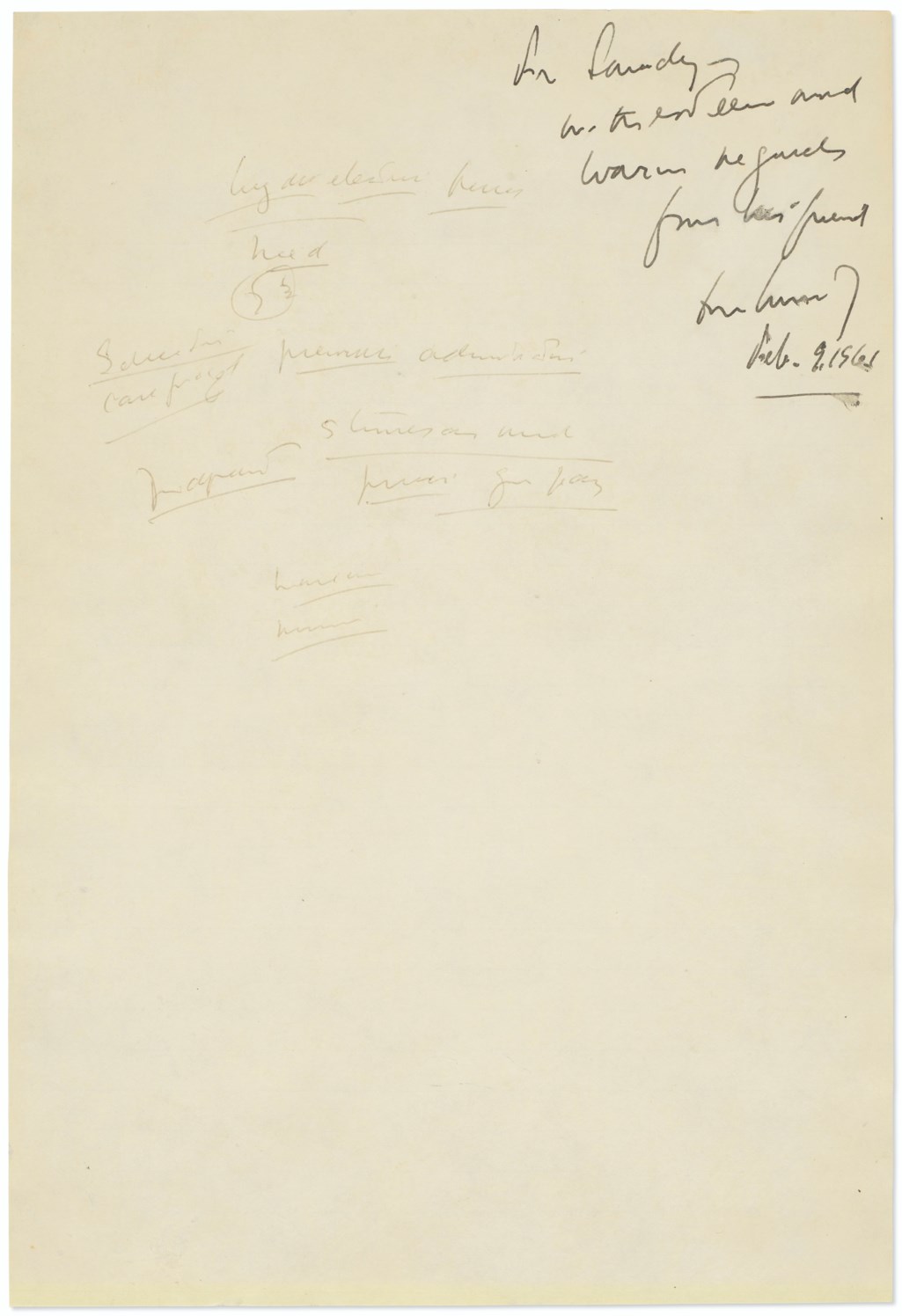 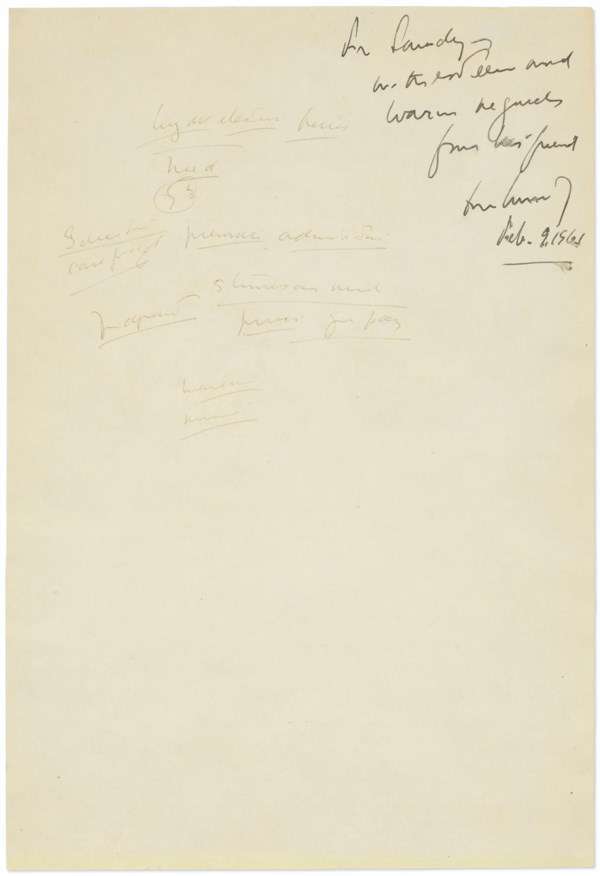 Lot 71
Notes from the first Presidential debate
John F. Kennedy, 26 September 1960
USD 30,000 - USD 50,000
A Christie's specialist may contact you to discuss this lot or to notify you if the condition changes prior to the sale.
View Report
The condition of lots can vary widely and the nature of the lots sold means that they are unlikely to be in a perfect condition. Lots are sold in the condition they are in at the time of sale.

One page of lined notepaper, 312 x 212 mm. (some fading from sunning, glue and mounting remnants on verso).

Notes taken by John F. Kennedy during his first televised debate against Richard Nixon. Inscribed as President to debate panelist Sander Vanocur. The first televised debate between a pair of major-party presidential nominees attracted an audience of nearly 70 million on the evening of 26 September 1960. The first in a series of four, the debate was staged in the studios of WBBM, Chicago's CBS affiliate and was carried by all three major networks. Moderator Howard K. Smith and joined by panelists Charles Warren (Mutual) Stuart Novins (CBS), Bob Fleming (ABC) News and Sander Vanocur (NBC). Kennedy delivered the first of the opening statements, and when he finished, sat down while Nixon gave his remarks. It was at this point that Kennedy penned many of the notes on the present manuscript as they touch some of the remarks Nixon made in his opening statement. A review of the debate transcript and extant video recordings bear this out: Nixon, in rebutting Kennedy's assertion that the nation was "standing still" economically, looked to the "previous Administration" (e.g. Truman's) for a favorable comparison with Eisenhower's, asserting that wages had risen "five times as much" under Eisenhower's watch than under Truman’s. On the third line down on the page, Kennedy writes "previous administration" and beneath, "5 times as much." Kennedy adds other notes, including "Education | care for aged" corresponding Nixon's statements on those subjects in his opening statement. Kennedy would return to both subjects later in the debate. We are grateful to the Commission on Presidential Debates and the John F. Kennedy Library for making the transcripts and archival footage of the 26 September 1960 available online.

Sometime after the debate, the notes became the possession of Sander Vanocur (1928-2019), the panelist representing NBC news. Vanocur, who would go on to cover the Kennedy White House, is best known for asking Nixon to explain why Eisenhower, "when asked to give one example of a major idea of yours [Nixon’s] that he adopted. His reply was, and I’m quoting; 'If you give me a week I might think of one. I don’t remember.'" Although well parried by Nixon, the question would plague him for the duration of the campaign. Rumors circulated that the question was a plant by the Kennedy campaign—a charge Vancour dismissed, citing his question to Kennedy as to why he had been unable to successfully pass any legislation in the Senate. "But I worked goddamn hard on that question," Vanocur recalled, "and it was the most glaring question that one could ask. I thought I had asked Kennedy a good question, though in comparison it didn't even match. But Nixon would never forgive me for that…." (Sander Vanocur, Oral history interview, John F. Kennedy Presidential Library, 9 August 1973, p. 24-25) Much has been written on Kennedy's "edge" during this first televised presidential debate. Vanocur remarked that the "prevailing wisdom" of the time was "those who had seen the debate on television thought Kennedy had won. Those who had heard it on the radio thought Nixon had won." The panelists hadn't considered how Nixon's grey suit would have appeared on black and white televisions. And beside a washed out Nixon, stood a tanned Kennedy, standing out in a blue suit. But the "press panel did not see the debate as viewers did," Vanocur stressed. "What I do remember is that Nixon had some sweat on his chin and addressed too much of what he said to Kennedy rather than to the television camera directly in front of him. Kennedy, apart from a few fleeting glances at Nixon, addressed his remarks directly to his camera and America." (Vanocur, "Debates have come a long way since 1960", Boston.com, 3 Oct. 2000) Provenance: Sander Vanocur to his descendant. Vanocur was not known to have remarked on the circumstances surrounding the present manuscript coming into his possession. While it is plausible that Kennedy left the present manuscript on the set at WBBM and Vanocur recovered it as a souvenir, Kennedy's February 1961 inscription suggests that the it could have been also a gift from the President. The manuscript was kept on long term loan by Vanocur at The Newseum in Washington until its closure in 2019 and was featured in exhibitions including Every Four Years: Presidential Campaigns and the Press (2012-2013).