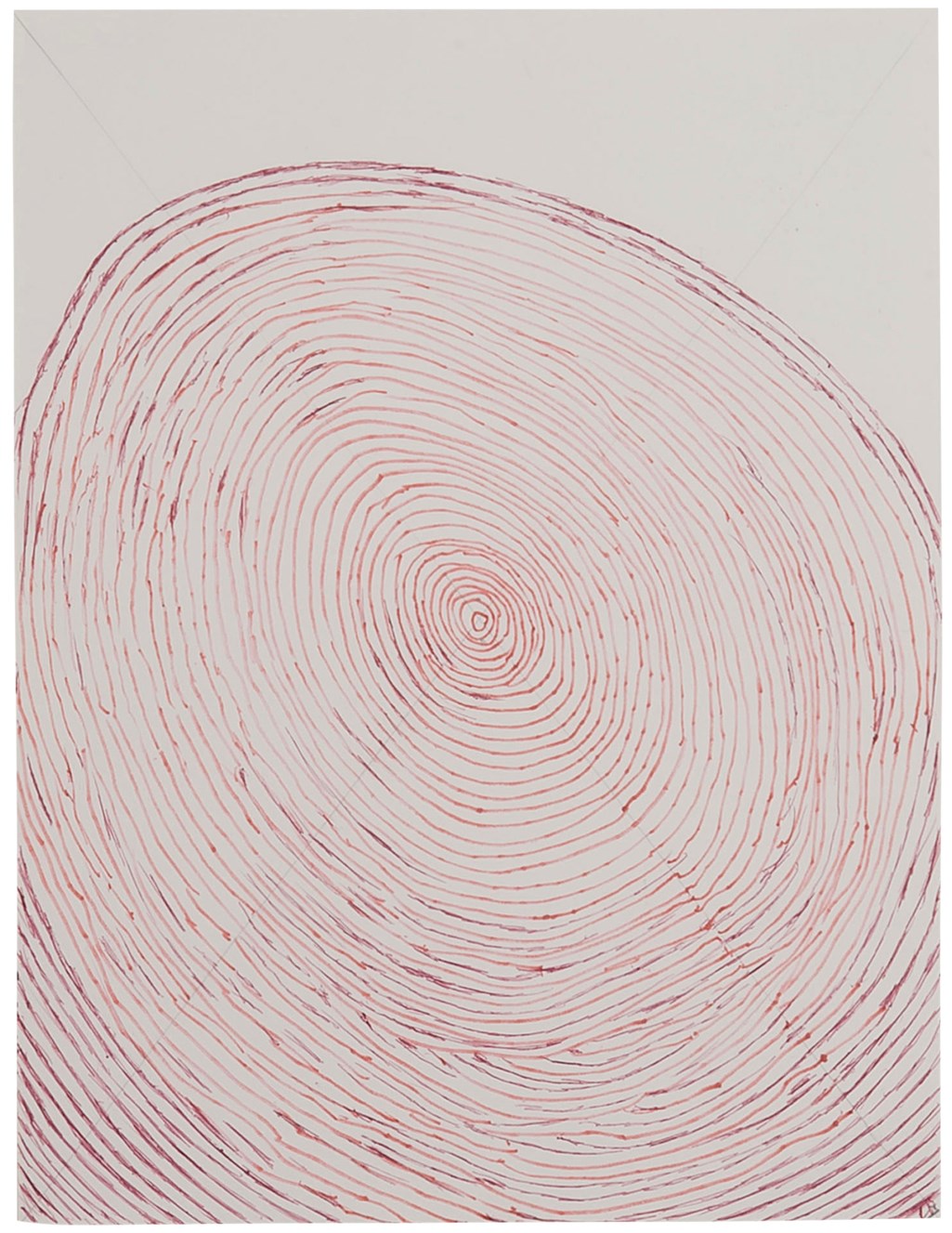 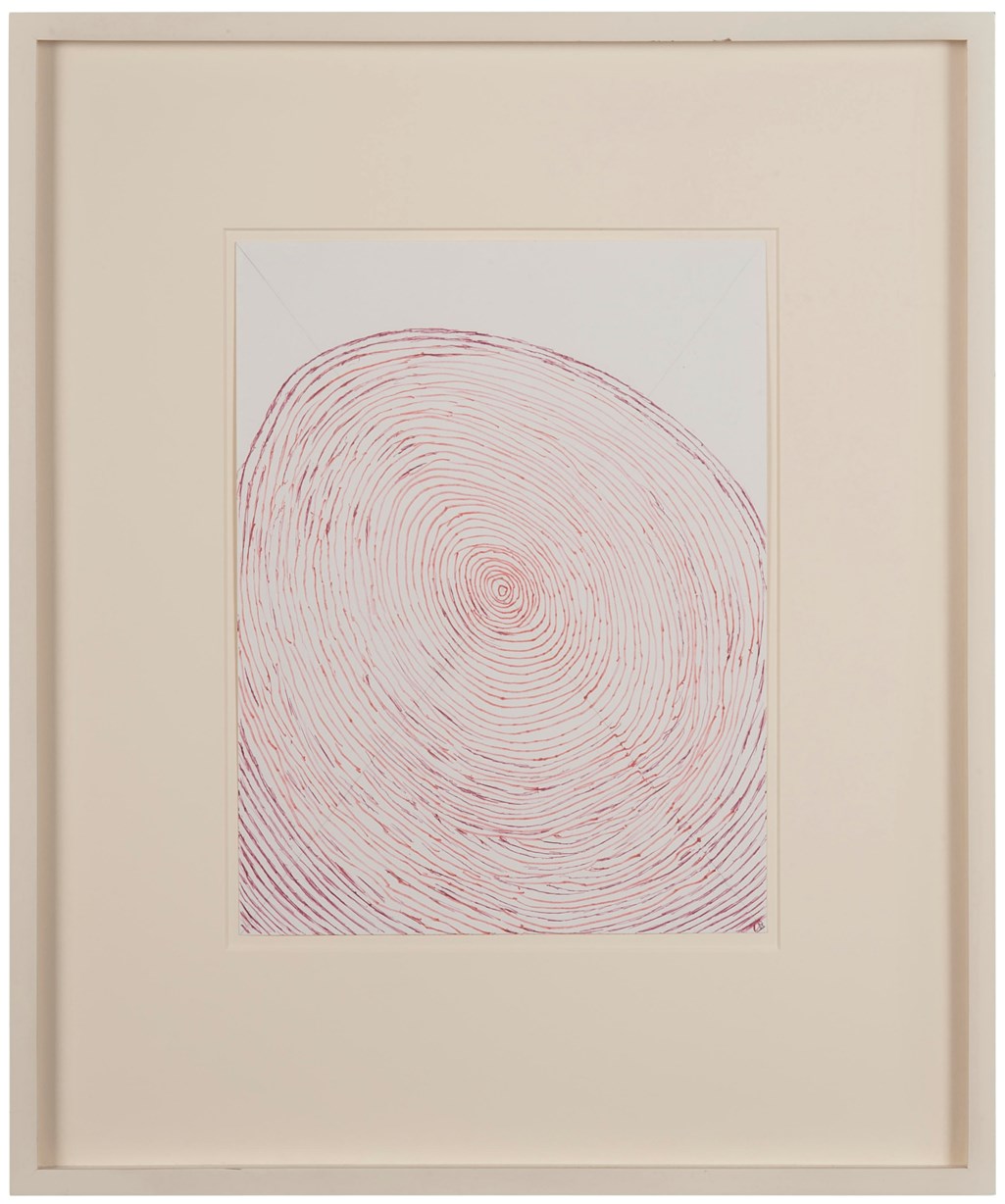 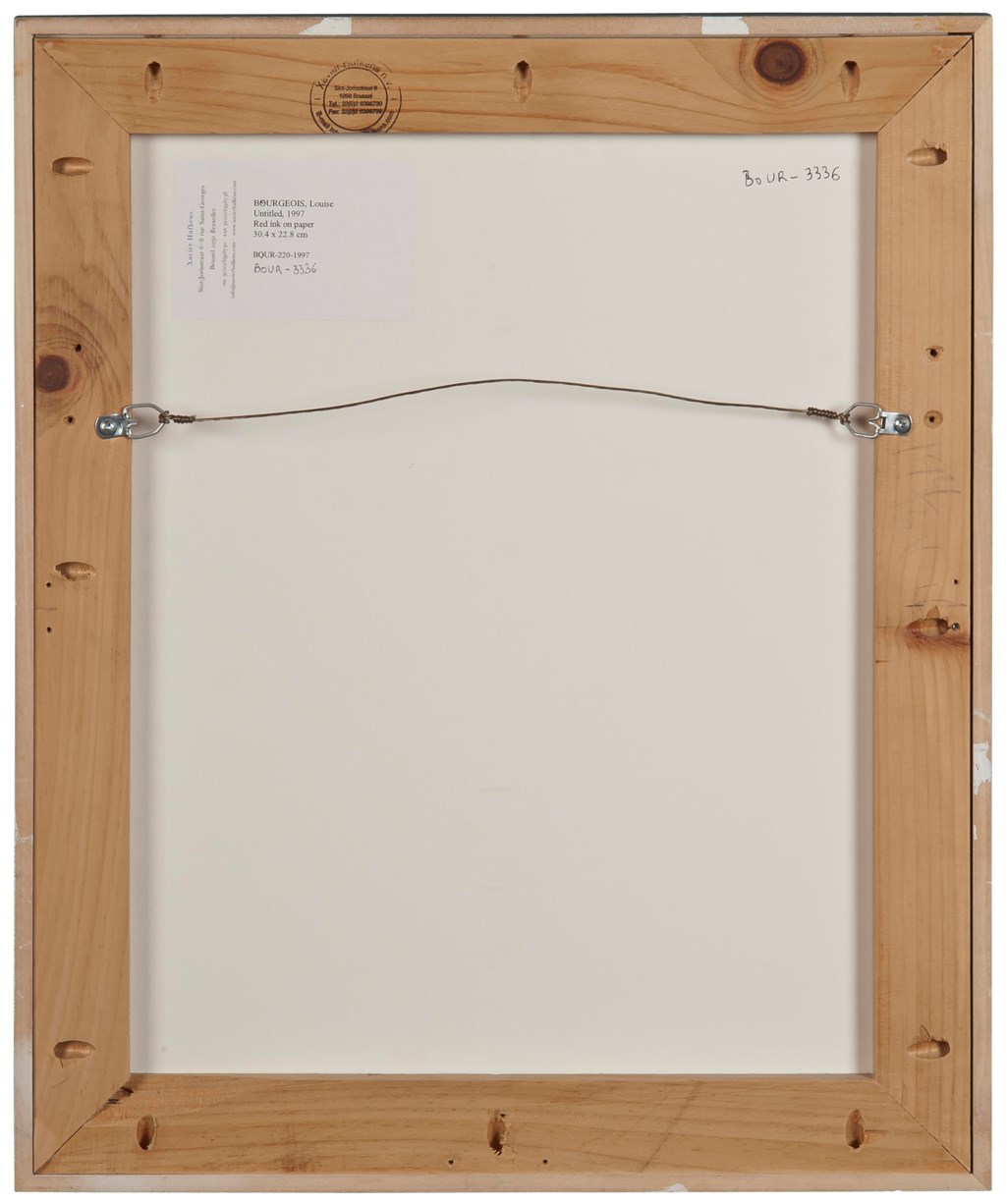 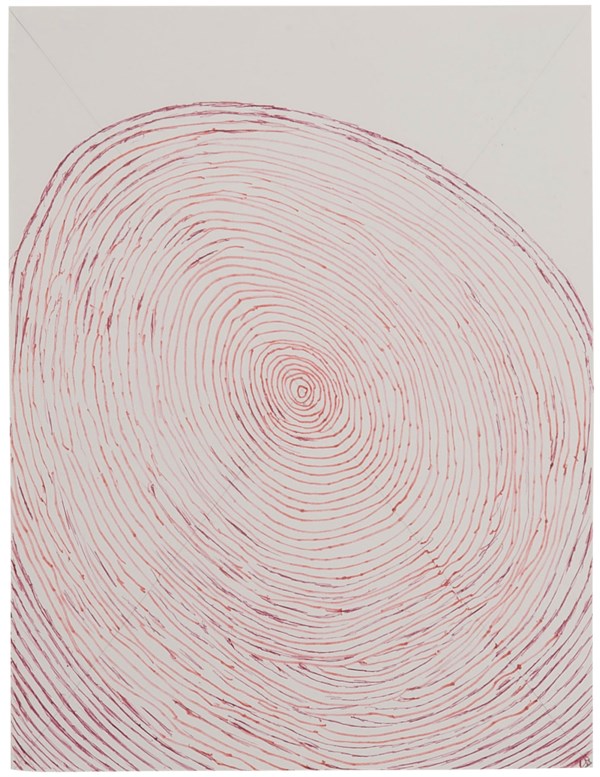 Lot 27
Louise Bourgeois (1911-2010)
Untitled
GBP 10,000 - GBP 15,000
A Christie's specialist may contact you to discuss this lot or to notify you if the condition changes prior to the sale.
View Report
The condition of lots can vary widely and the nature of the lots sold means that they are unlikely to be in a perfect condition. Lots are sold in the condition they are in at the time of sale.

Xavier Hufkens, Brussels (acquired directly from the artist).
Acquired from the above by the present owner in 2004.

‘The spiral is an attempt at controlling the chaos … It has two directions. Where do you place yourself, at the periphery or at the vortex?’
Louise Bourgeois

Executed in 1997, Untitled is an intimate work on paper by Louise Bourgeois. For Untitled, Bourgeois inked a series of rust red concentric circles, like the whorls of a fingerprint or the rings of a tree trunk, filling much of the page. The line itself is uneven, at times delicate and bumpy, with a dense, pulsating centre. Untitled has been featured in two major Bourgeois retrospectives, first in the exhibition Louise Bourgeois Recent Works at Malmö Konsthall and more recently, in 2003, at the Louisiana Museum of Modern Art. Within a practice that probed the overlap of nature and the corporeal, much of Bourgeois’ work concerned distortion: the pliable body, the repetition of form, a Surrealism of figure. Untitled feels like a detailed close-up, but of what exactly is unknown. Bourgeois was completely enthralled by the spiral, and it remained a recurrent motif that traversed mediums and decades throughout her prolific career. She has traced this fascination to the washing and wringing out of textiles in the River Bièvre, a childhood chore for her family’s textile restoration business. That the spiral’s allure endured owed much to its inherently conflicting nature; for Bourgeois, spirals are at once both outwards and inwards, the still point at the centre of disorder.
Bourgeois has made drawings her entire life, again tracing the act to her parents’ business for which should would pencil in the patterns that needed to be rewoven. Later, drawing allowed for an immediacy that was otherwise unavailable through sculpture, and abstracted images in particular allowed her to slip into a loose rhythm, a freedom of the unconscious: ‘I get my ideas down quickly. They don't offer the physical resistance that making sculpture does. The drawings do not involve the body the way that sculpture does’ (L. Bourgeois, ‘Artist Louise Bourgeois reveals her thoughts on drawing’ The Guardian, September 18, 2009, https://www.theguardian.com/artanddesign/2009/sep/19/louise-bourgeois-on-drawing). Indeed, in Untitled’s looping spiral, the line presents a boundless accumulation and endless possibility.
Post Lot Text
Artist's Resale Right Regulations 2006 apply to this lot. You must pay us an extra amount equal to the resale royalty and we will pay the royalty to the appropriate authority. Please see the Conditions of Sale for further information.