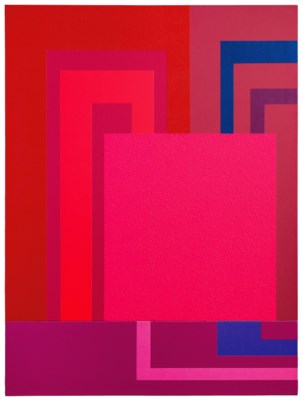 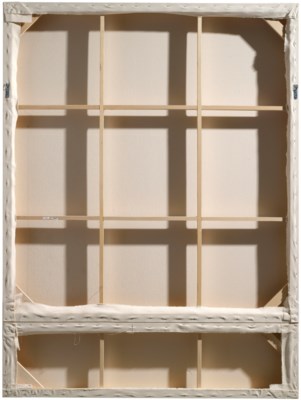 Lot 35
Peter Halley (b. 1953)
Mindgame
GBP 45,000 - GBP 65,000
A Christie's specialist may contact you to discuss this lot or to notify you if the condition changes prior to the sale.
View Report
The condition of lots can vary widely and the nature of the lots sold means that they are unlikely to be in a perfect condition. Lots are sold in the condition they are in at the time of sale.

Galleria Cardi & Co., Milan.
Acquired from the above by the present owner.

‘Since 1980, my images seem, step by step, to have grown more complex and fast-paced in a way that somehow parallels the acceleration of the movement and information in the new computer culture. I take great pleasure in the idea that my work could be a mirror of this era of change.’ (Peter Halley)

Looming almost two metres in height, Mindgame is a large-scale example of Peter Halley’s celebrated geometric abstractions. A network of nested, interlocked and interconnected right-angled forms in radiant hues – crimson, scarlet, violet, magenta – is laid out across two joined canvases; the lower, smaller and more purple section implies a figurative ground level. This work exemplifies the psycho-social approach to abstraction that first brought Halley to prominence in New York during the 1980s. Like his contemporaries Jeff Koons and Ashley Bickerton, Halley was initially associated with the so-called neo-geometric or ‘neo-geo’ conceptualist movement that took hold in the East Village. Building on the languages of Pop Art, Minimalism and Op Art, his work sought to capture what he saw as the ‘geometricisation of modern life’. His compositions – conceived as a series of ‘cells’ or ‘prisons’ connected by ‘conduits’ – were reflective not only of the city’s three-dimensional urban grid, but also of the burgeoning flow of information spawned by computer technology. In works such as Mindgame, geometric abstraction becomes a metaphor for the isolating effects of these new structures. The single square – once, for Kazimir Malevich, the ultimate site of modernist aspiration – is now recast as a zone of confinement. Like an organism fed from a tube, its only contact with the outside world is via a series of rigid ‘conduits’ that mimic the flow of a circuit board. The work speaks to a world in which there are no longer singular ‘places’, but only vacuums that exist between endless currents of data. It is a signifier without a signified: a perfect expression of the postmodern condition.

Halley is highly regarded as a cultural theorist. In this vein he was strongly influenced by the writings of the French post-structuralists – notably Jean Baudrillard – whose ideas were widely discussed in New York intellectual circles during the early 1980s. Halley was particularly fascinated by the relationship between the individual and larger social structures, and plays out this dialogue in his works. ‘The paintings are a critique of idealist modernism’, he claims. ‘In the “colour field” is placed a jail. The misty space of Rothko is walled up’ (P. Halley, ‘Notes on the paintings’, 1982, reproduced in Peter Halley, exh. cat., Waddington Galleries, London, 2007, n.p.). Abstraction had previously made claims to transcendence; now, as its structures were imposed upon contemporary society, it had become a means of imprisonment. Halley’s use of Roll-A-Tex – a textural additive common to suburban buildings – lends his works a base architectural quality, as if extracted from the ceiling of a clinic or motel. His vibrant colours are similarly conceived: where bright primaries had offered a new ground zero for artists such as Piet Mondrian, here they become instead markers of artifice, evoking fluorescent indoor lighting and the glare of inner-city neon. Using Baudrillard’s terminology, Halley regarded his Day-Glo palette as a ‘hyper-realisation’ of modernism’s chromatic ambitions. It is ‘a signifier of “low budget mysticism”’, he claimed. ‘It is the afterglow of radiation’ (P. Halley, ‘Notes on the paintings’, 1982, reproduced in Peter Halley, exh. cat., Waddington Galleries, London, 2007, n.p.). For Halley, these types of colour – once deployed in deliberately non-representational terms – were now reflective of contemporary life. In the same way, the geometric grids espoused by his forebears were no longer ‘abstract’, but had come to define our systems of communication. As such, works such as Mindgame visualise, for Halley, the dynamics of figurative reality.