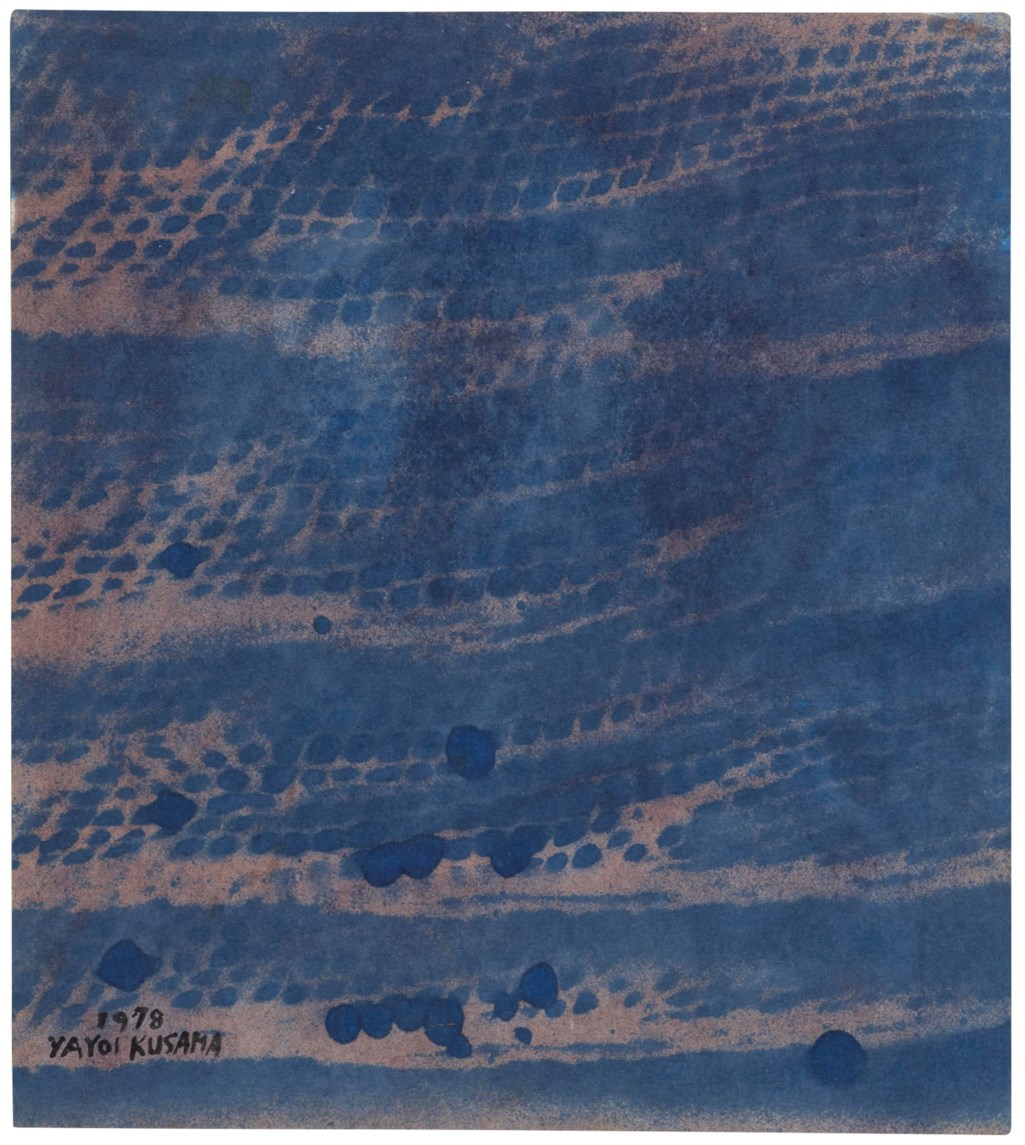 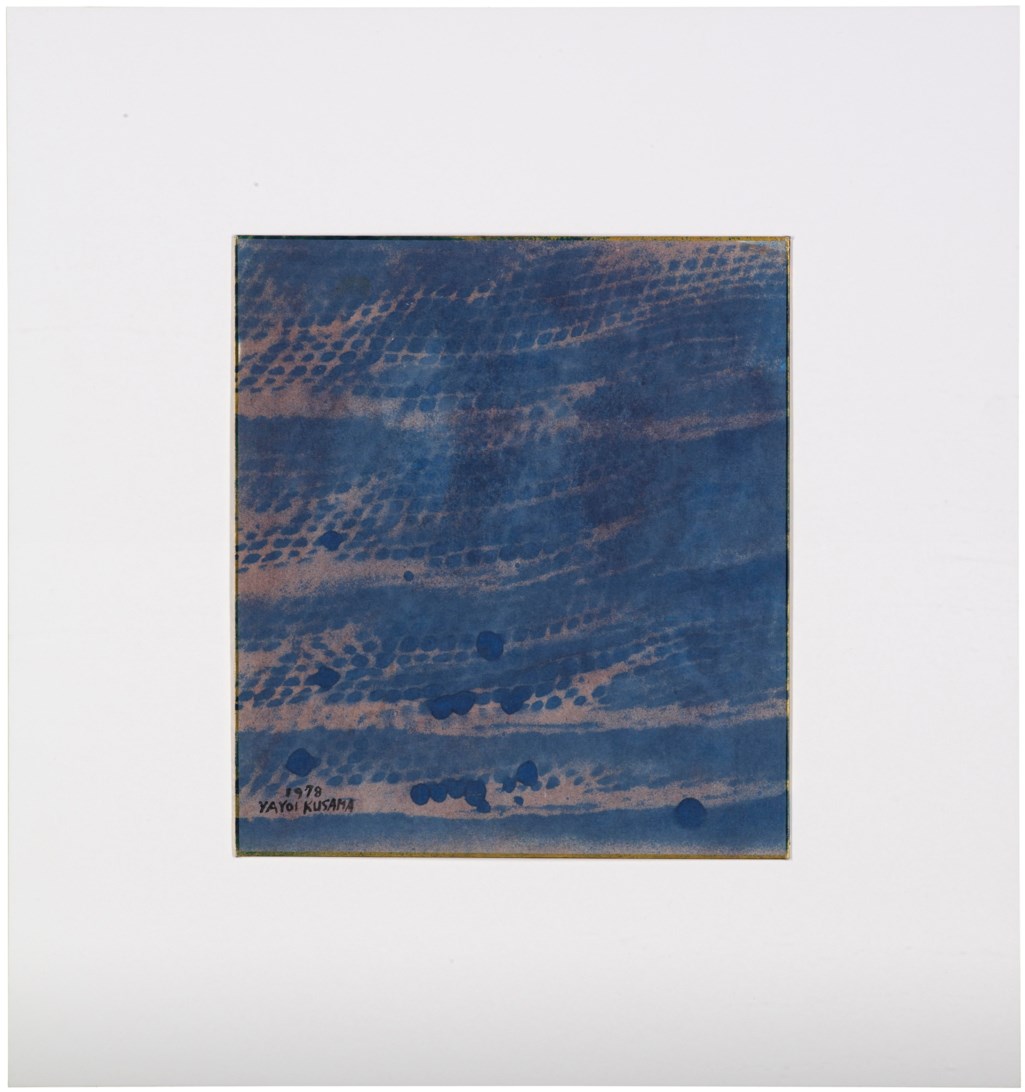 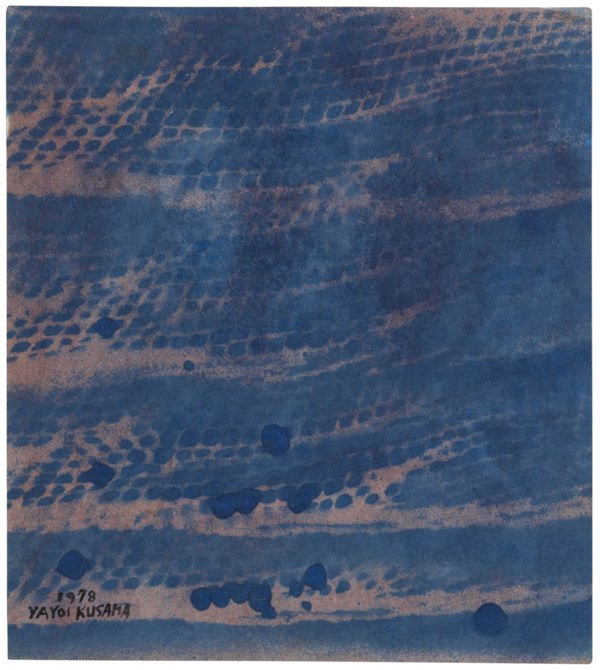 Lot 2
Yayoi Kusama (B. 1929)
Shore
GBP 10,000 - GBP 15,000
A Christie's specialist may contact you to discuss this lot or to notify you if the condition changes prior to the sale.
View Report
The condition of lots can vary widely and the nature of the lots sold means that they are unlikely to be in a perfect condition. Lots are sold in the condition they are in at the time of sale.

‘When I was a child, one day I was walking in the field, then all of a sudden, the sky became bright over the mountains, and I saw clearly the very image I was about to paint appear in the sky. I also saw violets, which I was painting, multiply to cover the doors, windows and even my body … I immediately transferred the idea onto a canvas.’ (Yayoi Kusama)

Rendered in enamel on paperboard, Yayoi Kusama’s 1978 painting Shore is awash with inky hues of cobalt and sea blue. The colours swill around the picture plane like water, ebbing and flowing like the ocean tide on a sandy shore. The work was executed during a period of self-imposed isolation for the artist, in which her artistic efforts were focused predominantly on literature and writing following her return to Japan in the early 1970s: indeed, 1978 saw the publication of her first novel Manhattan Suicide Addict. Shore is a spellbinding example of one of Kusama’s first re-engagements with visual art during this time, part of a group of technically similar works all titled after natural phenomena. Her iconic net motif ripples across the surface of the painting like a living organism, generating a mesmerising sense of movement. This enveloping effect draws the viewer into the artist’s world: lost in the simplicity of its patterns, we experience the trancelike repetition of the painting process itself.

Born in Japan in 1929, Kusama moved to New York City in a leap of faith at the age of twenty-nine. Her impact on the international art world was profound: the cosmic sublimity of her mesmeric ‘infinity net’ compositions positioned her as heir to the Abstract Expressionist practices of Jackson Pollock and Barnett Newman, whilst her monochromatic canvases presaged elements of the Minimalist movement that took hold in the 1960s and 1970s. The subtle, shifting surfaces of her paintings were inspired by a series of hallucinations that the artist experienced from the age of ten onwards, in which veils and dots appeared before her eyes. By committing their effects to canvas, she hoped to evoke a transcendental space beyond the limits of consciousness. In the present work, this deeply personal vision speaks to the diffuse nature of the human condition, offering a universal hymn to the infinite void that frames our existence.
Post Lot Text
The work is accompanied by a registration card issued by the artist’s studio.