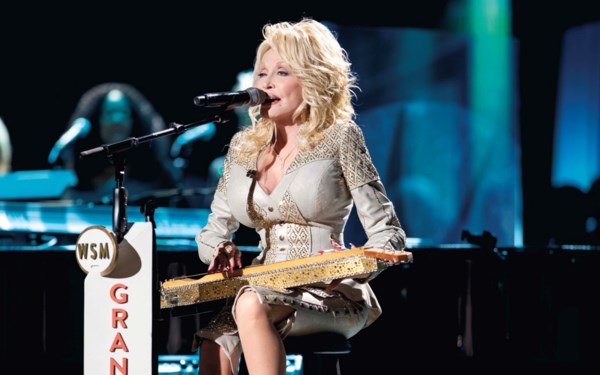 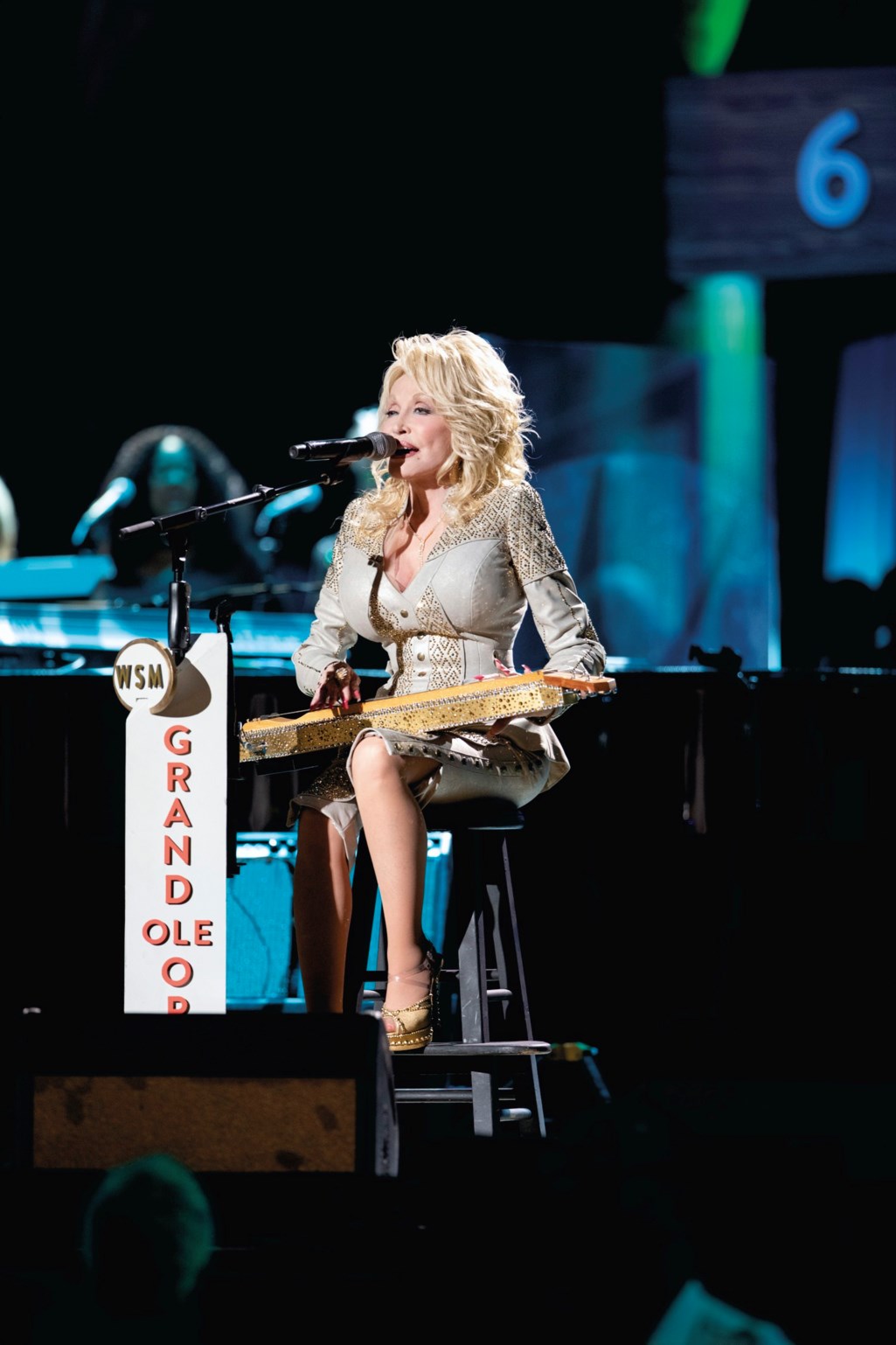 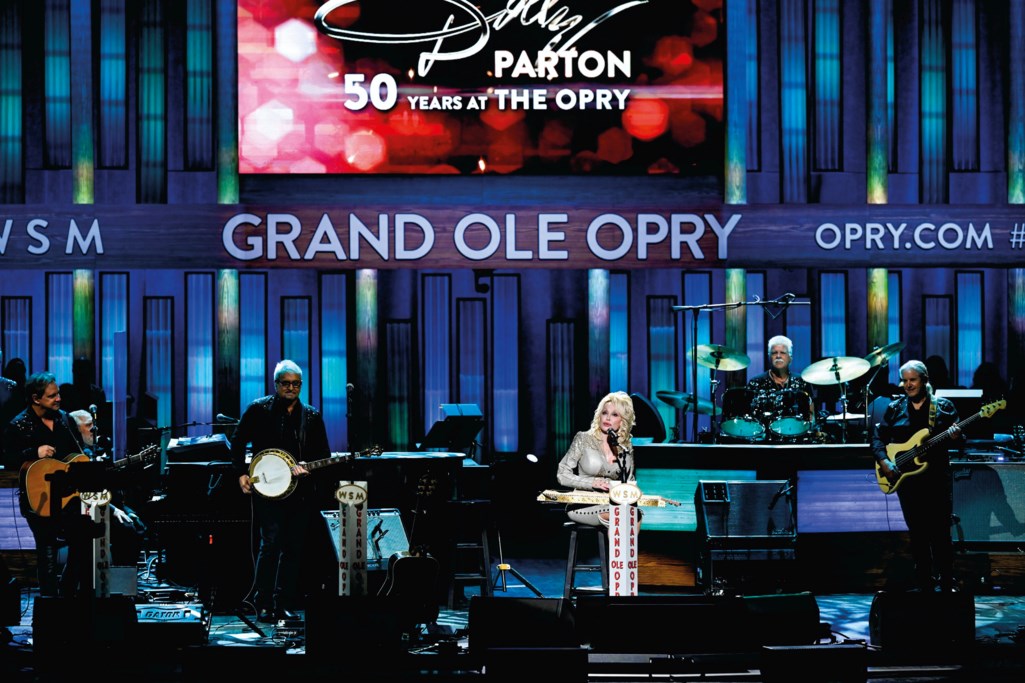 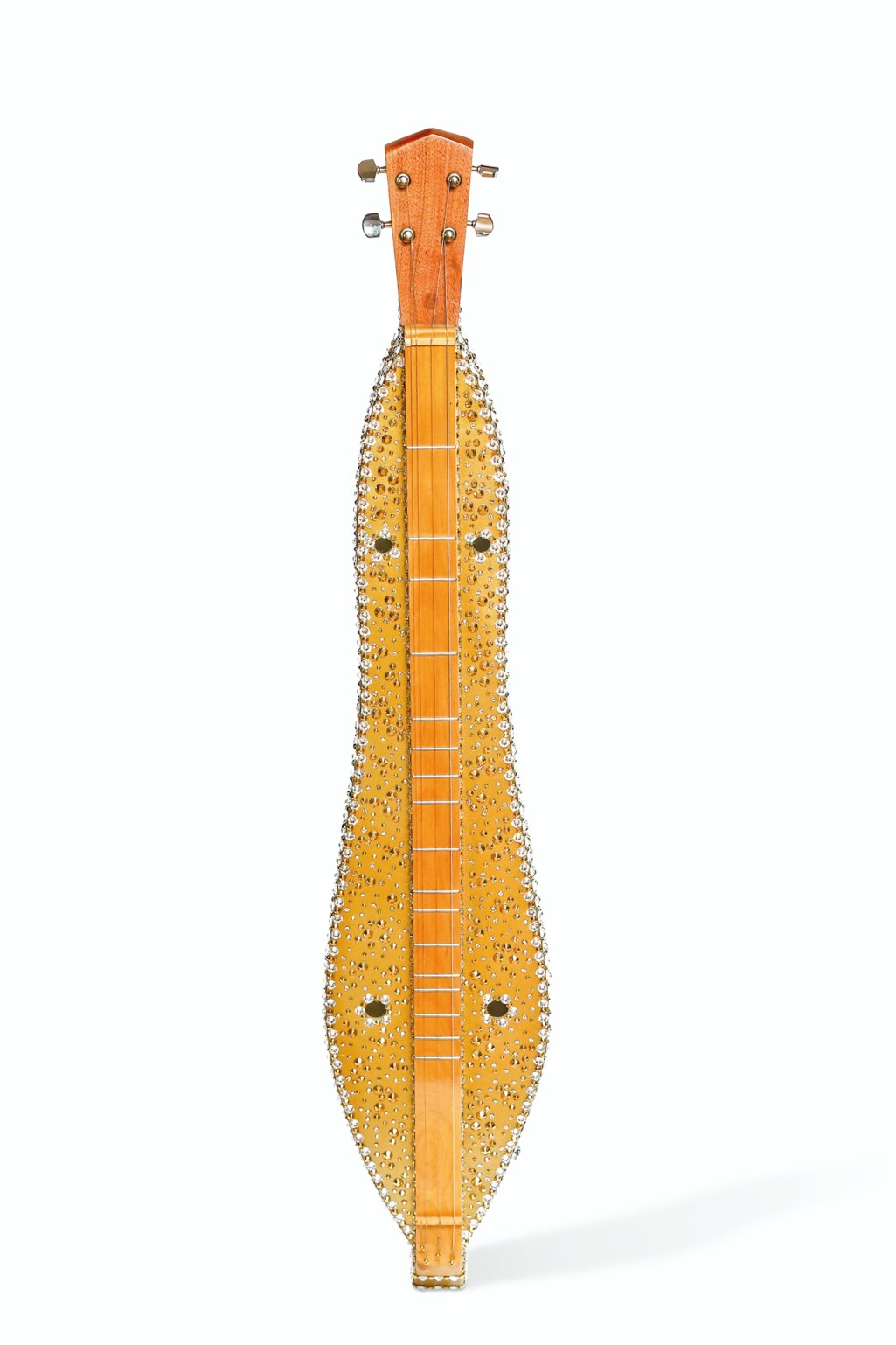 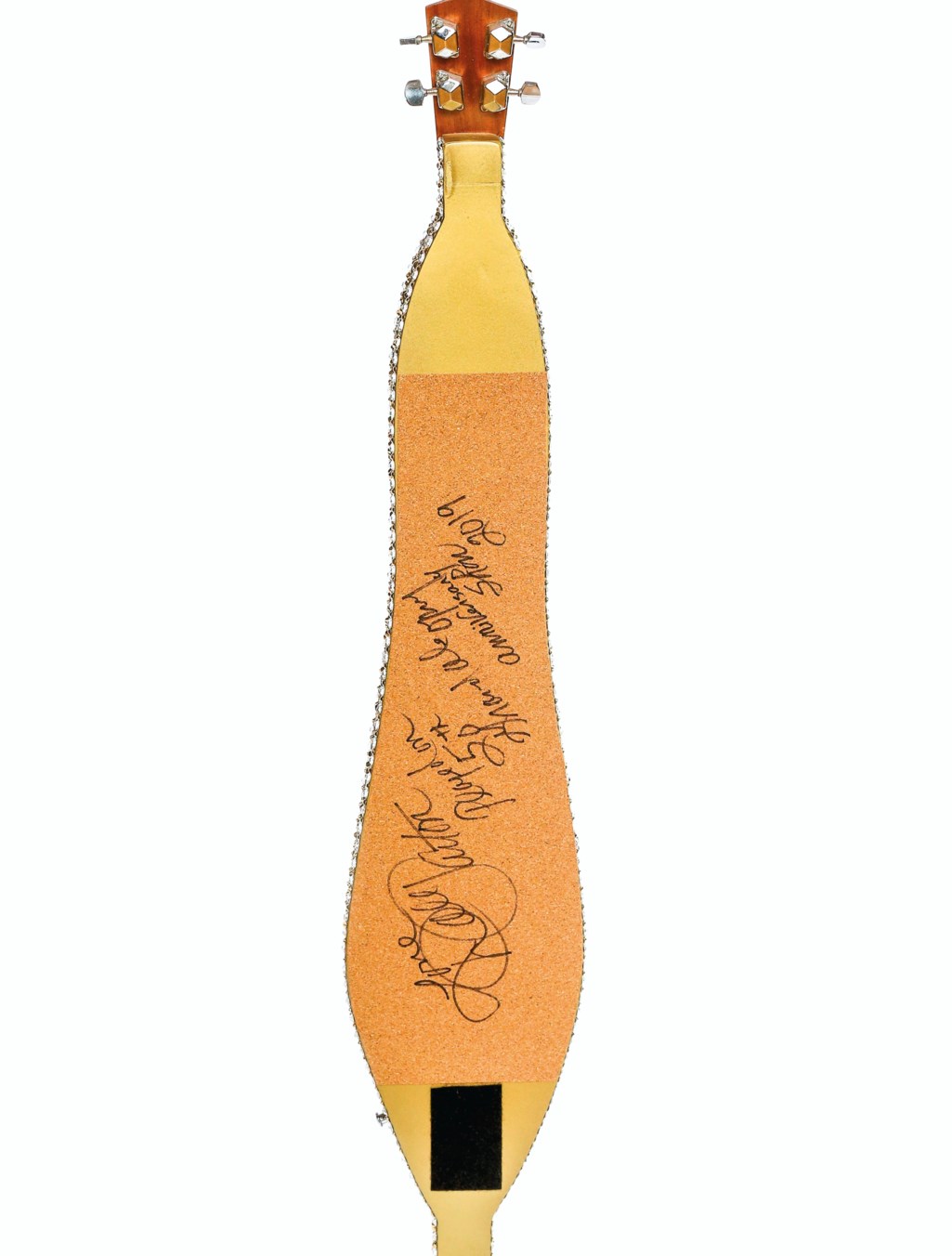 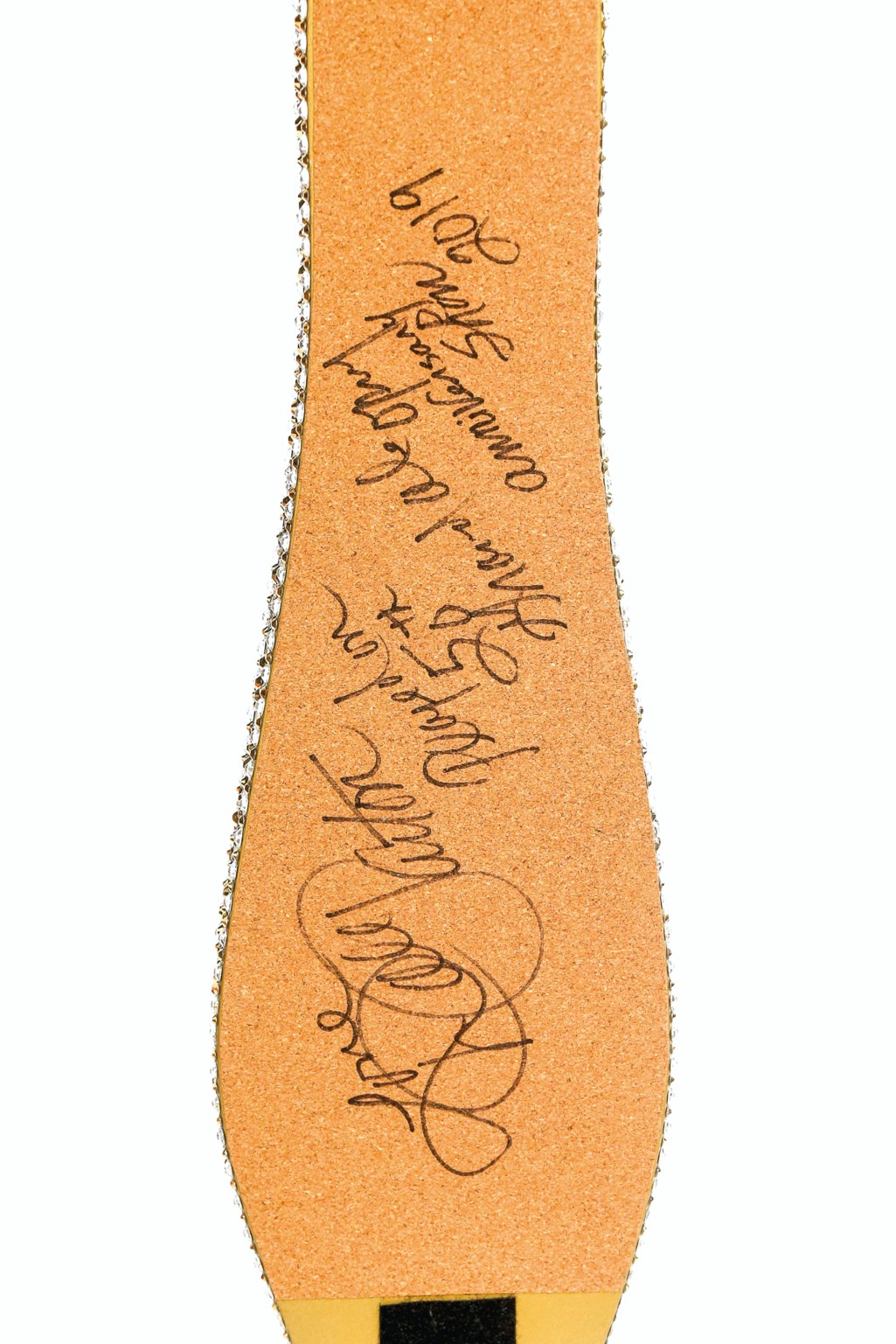 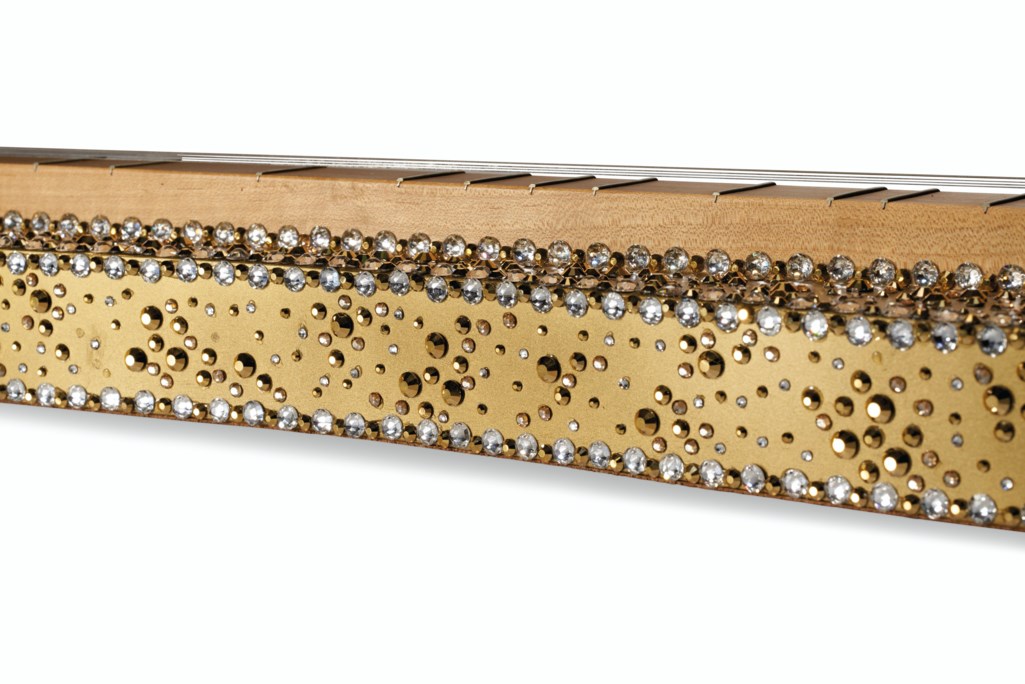 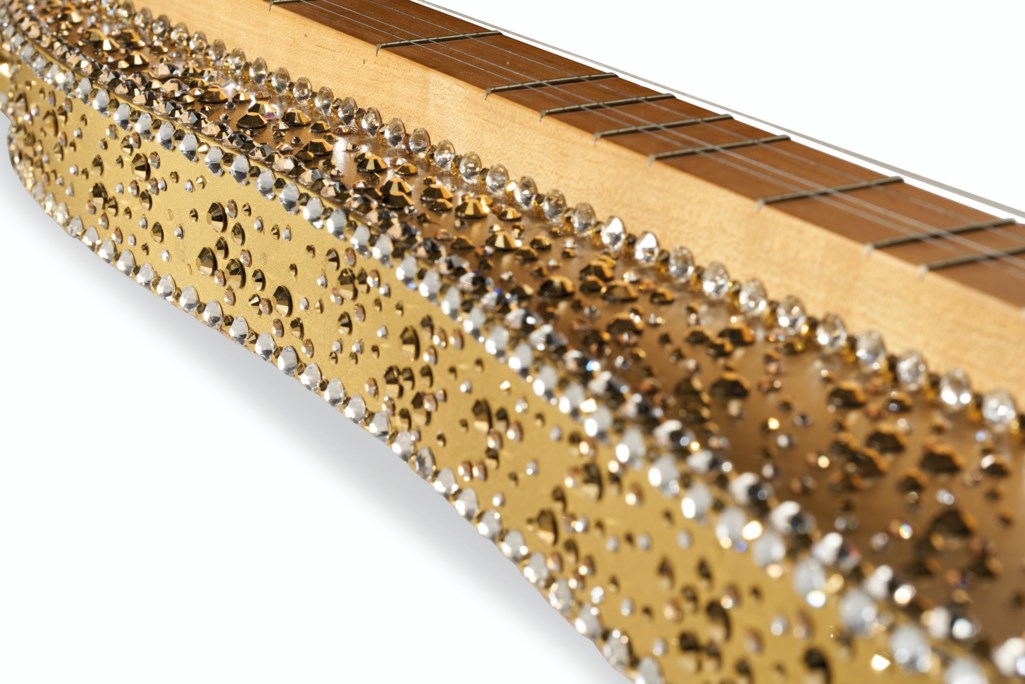 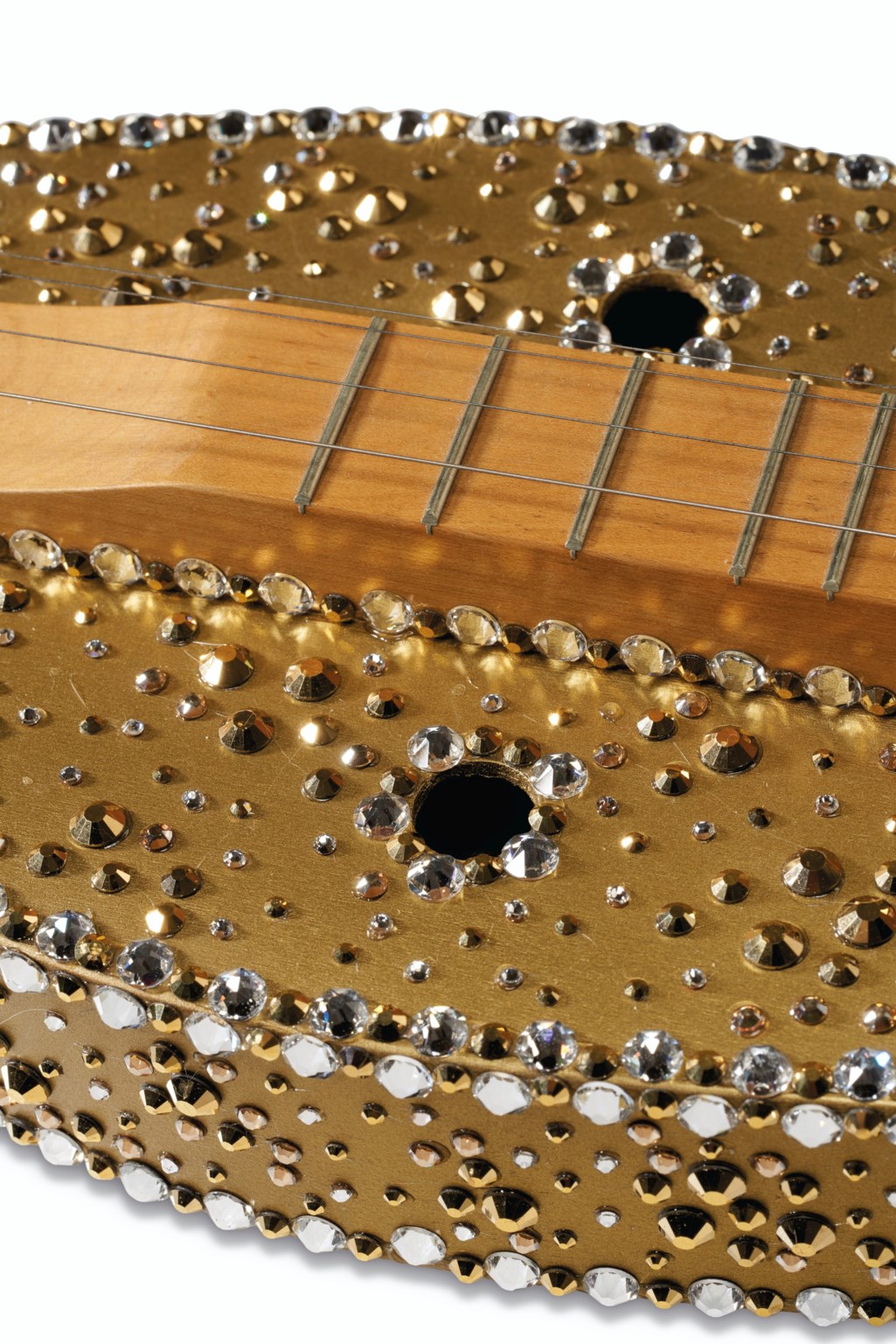 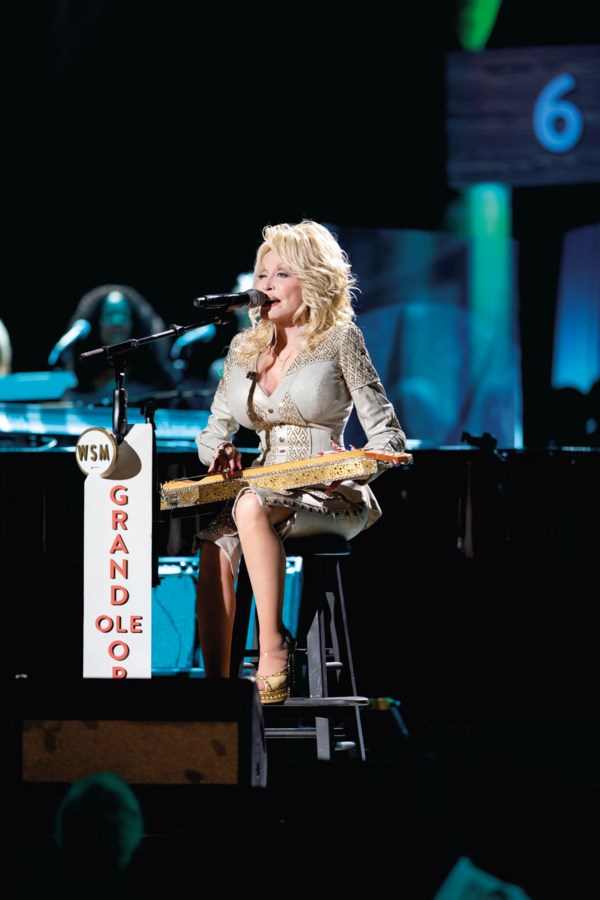 Lot 10
DOLLY PARTON
JOHN RAWDON, AN APPALACHIAN DULCIMER, NEWCOMERSTOWN, OHIO, 1980, THE DECORATION BY STEVE SUMMERS, CIRCA 2019
USD 50,000 - USD 100,000
A Christie's specialist may contact you to discuss this lot or to notify you if the condition changes prior to the sale.
View Report
The condition of lots can vary widely and the nature of the lots sold means that they are unlikely to be in a perfect condition. Lots are sold in the condition they are in at the time of sale.

Minor loss to the nut, several applied rhinestones missing, cork and felt applied to the back for performance purposes. Some wear to the gold painted detailing consistent with age and use.

Labeled APPALACHIAN/ DULCIMER/ DULCIMER BY/ JR/ 263/ 8-23-80/ 498-7753 (740), the body of walnut covered in gold paint and hand-studded with approximately 1000 applied Swarovski crystals, the fingerboard of maple, signed and inscribed in black marker pen by Dolly Parton on the back "Love Dolly Parton / Played on 50th Grand Ole Opry Anniversary Show 2019", the dulcimer played on stage by Dolly Parton for a performance of My Tennessee Mountain Home at the Grand Ole Opry House in Nashville, Tennessee, on 12th October 2019 for the 50th anniversary special Dolly Parton: 50 Years at the Opry
36 in. (91.4 cm.) long, overall
Together with a bespoke walnut stand, 40 in. (101.5 cm.)

With a career spanning six decades, 25 Number One songs on the Billboard country music charts, a record 44 Top 10 country albums, 25 RIAA certified gold, platinum and multi-platinum records, and over 100 million record sales worldwide, larger-than-life country legend Dolly Parton has truly earned her icon status. One of the most honoured female country artists of all time, Parton has garnered ten Grammy Awards from an astounding 49 nominations, including a Grammy Lifetime Achievement Award in 2011, thirteen Academy of Country Music Awards and three American Music Awards. A staggeringly prolific songwriter with a catalog of over 3000 songs ranging from autobiographical classics like Coat of Many Colors and I Will Always Love You, to spirited female anthems Jolene, Just Because I’m a Woman and 9 to 5, Parton was inducted into the Nashville Songwriters Hall of Fame in 1986 and - country music's highest honor - the Country Music Hall of Fame in 1999. One of an elite group to have received at least one nomination from each of the Academy Awards, Grammy Awards, Tony Awards, and Emmy Awards, Parton's achievements extend far beyond popular music. As an actress, she has starred in films such as 9 to 5 (1980) and The Best Little Whorehouse in Texas (1982), for which she earned Golden Globe nominations for Best Actress, as well as Rhinestone (1984), Steel Magnolias (1989) and Joyful Noise (2012). Parton was recognised by the U.S. Library of Congress in 2004 with their distinguished Living Legend Award and selected to receive the prestigious Kennedy Center Honors in 2006. The indefatigable Dolly is also a best-selling author, successful businesswoman and philanthropic powerhouse. A beloved national treasure with a universal appeal encompassing rappers and drag artists as well as hardcore country fans, Parton’s electric smile, self-deprecating humor, straight-talking spirit and signature style have made her more popular today than ever.

Hallowed country music institution the Grand Ole Opry celebrated Parton’s 50th anniversary as an Opry member on 12th October 2019 with two sold-out shows at the Grand Ole Opry House in Nashville, Tennessee, and a televised two-hour special Dolly Parton: 50 Years at the Opry to honor the queen of country. Announcing the shows back in 2018, Parton reminisced It was always my dream to be on the Opry… For me, the Opry is like the song ‘New York, New York’ — if you can make it there, you can make it anywhere. Parton’s extraordinary rags-to-rhinestones story began in the foothills of the Great Smoky Mountains, not far from the spot where her famous Dollywood theme park now lies. Born the fourth child of twelve to a musical family in 1946, Parton particularly credits her Uncle Bill for helping her get started in the music business. My uncle Bill Owens, well, he used to take me back and forth to Nashville from the time I was about ten years old, revealed Dolly during the anniversary special. He saw how serious I was about my music and he was acting as my manager trying to get me on a record label, and certainly trying to get me on the Grand Ole Opry… Course, we used to beg and sweet talk our way back stage at the Grand Ole Opry and just standing there watching all those greats and begging people to let us sing. Dolly’s dream came true one night in 1959, when Jimmy C. Newman gave up his spot so she could perform, introduced to the stage by Johnny Cash for her Opry debut at only thirteen years old. From taking the stage of The Cas Walker Farm and Home Hour in Knoxville, Tennessee, to landing a spot on The Porter Wagoner Show in 1967 following the successful release of her debut album Hello, I'm Dolly, Parton’s talent soon catapulted her to super-stardom. By then a regular performer on the Opry stage, Dolly became a member of the Grand Ole Opry on 4th January 1969, naming it one of the highlights of her whole life.

Reflecting on her 50 years at the Opry, Parton performed a 30-minute set of her career-defining classics for the anniversary special, including Jolene, 9 to 5 and I Will Always Love You. Dazzled by her show-biz glitz and shimmering soprano singing voice, it’s easy to overlook that Parton is also a talented multi-instrumentalist, known to play acoustic guitar, electric guitar, banjo, fiddle, dulcimer, piano, recorder, saxophone and autoharp all in the same show. Parton made no exceptions for her 50th anniversary Opry set, opting to accompany herself on a Swarovski-crystal bedazzled four-string dulcimer for a heart-warming rendition of her classic 1972 country composition My Tennessee Mountain Home. Of simple construction that utilized local woods such as walnut, chestnut or maple, the Appalachian Dulcimer is ubiquitous across all of Appalachia. With its tenor and rhythmic timbre, it was used to accompany folk dancing in the region and, more importantly, as an accompaniment to the English and Scottish ballads sung by American colloquial musicians of the 19th century, which formed part of the vital building blocks of what would become country music. Owned by Dolly for 30 years, this particular dulcimer was bejewelled with Swarovski crystal decoration by Parton’s Creative Director Steve Summers, who also designed her sequin pantsuit ensemble for the performance. Displaying the dulcimer on stage, she quipped to the adoring Opry audience I never leave a rhinestone unturned. Parton’s trademark bawdy humor was in full force as she sat down to play the instrument, explaining why she hadn’t worn a beautiful beaded gown for her 50th anniversary special: I knew I had to sit down on a stool and I didn’t want to show the Opry box office!

An enthusiastic humanitarian, Parton has supported many charitable efforts throughout her long career. Her literacy program Dolly Parton’s Imagination Library has sent out over 100 million books to children around the world. In response to the global COVID-19 pandemic, Parton has donated $1 million towards coronavirus research and launched a weekly online series where she reads bedtime stories to children to provide a welcome distraction during a time of unrest. By donating this dulcimer, the first musical instrument from Dolly Parton ever to appear at a global auction, Parton now hopes to support the frontline workers of the country music industry: Seeing my country music community suffer due to the pandemic has broken my heart. It was important to donate the dulcimer that was designed for my 50th Opry Anniversary so we can raise awareness and much needed funds to keep these folks on their feet before we can open the doors to our stages once again.