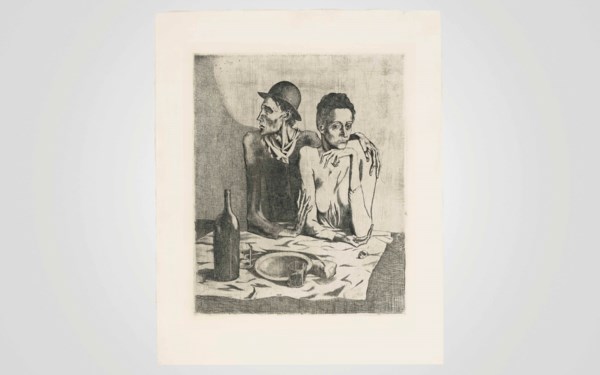 Sale 19754
Nourishment for the Soul: The Herrmann Collection of Prints by Pablo Picasso
Browse sale 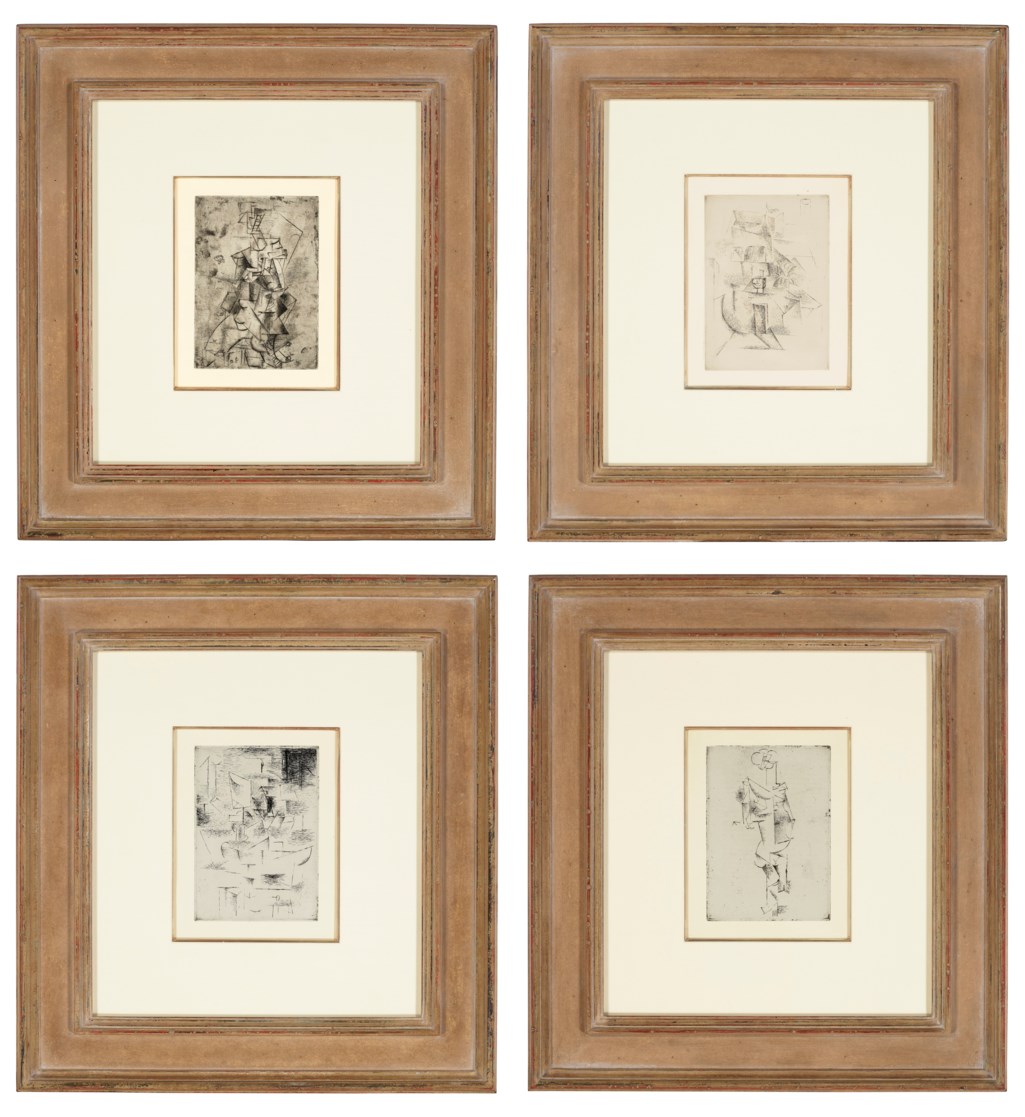 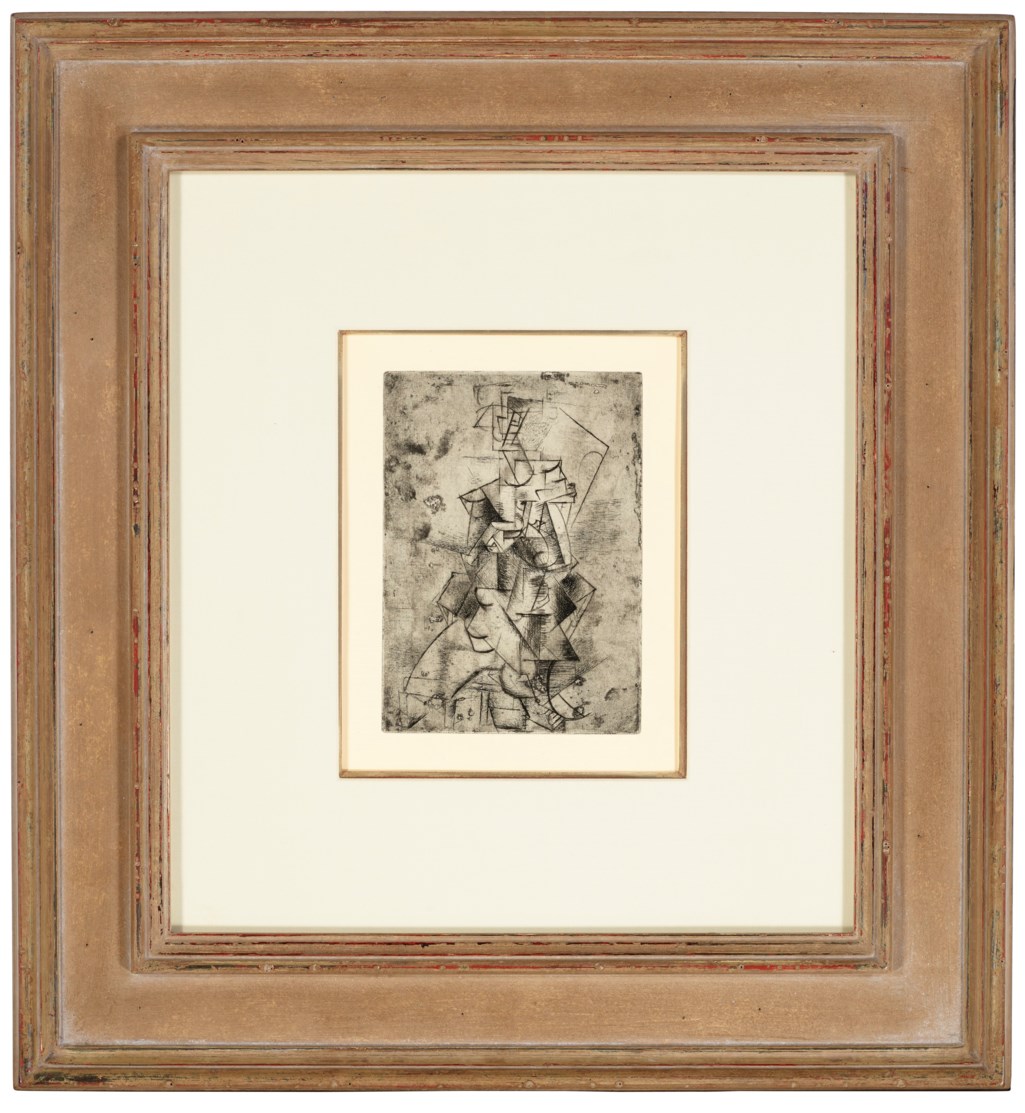 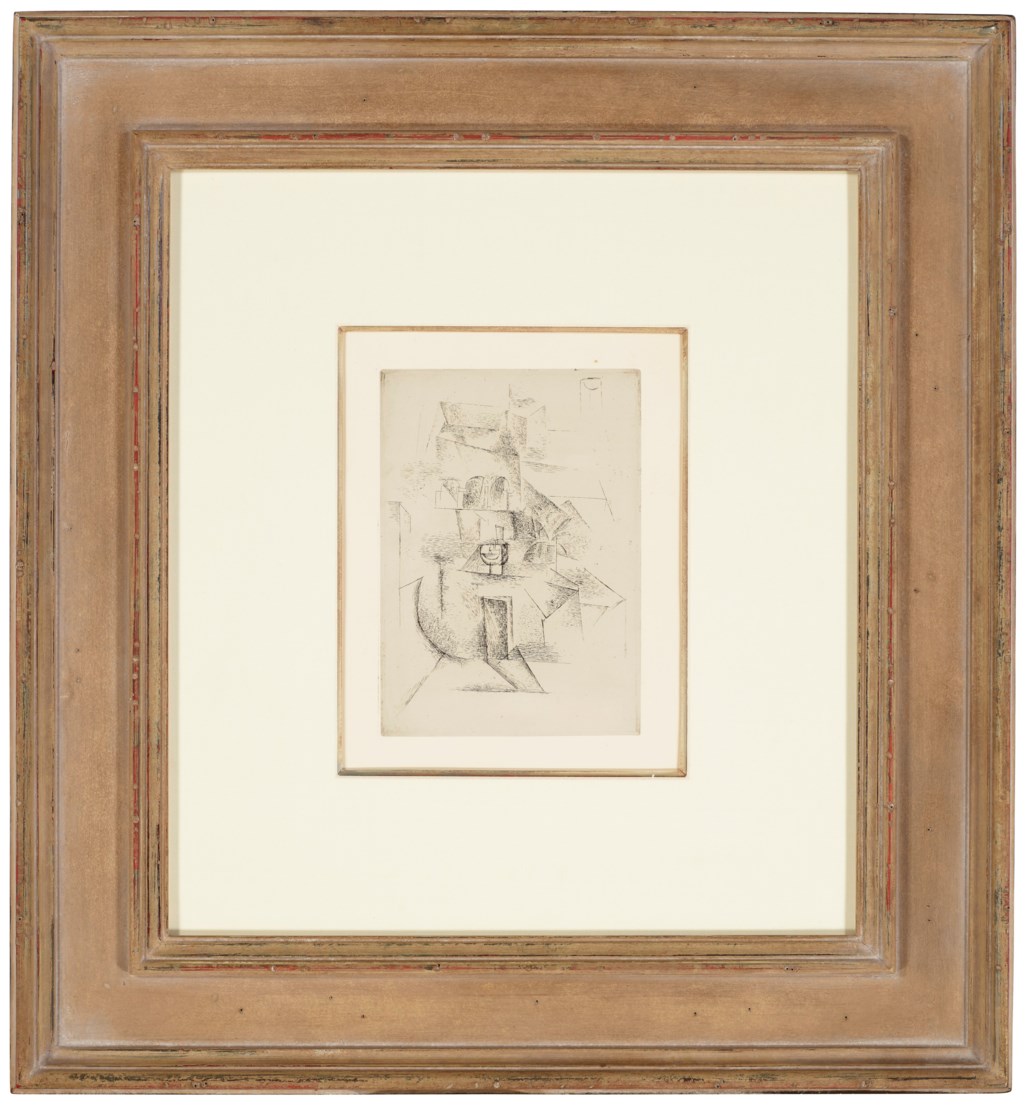 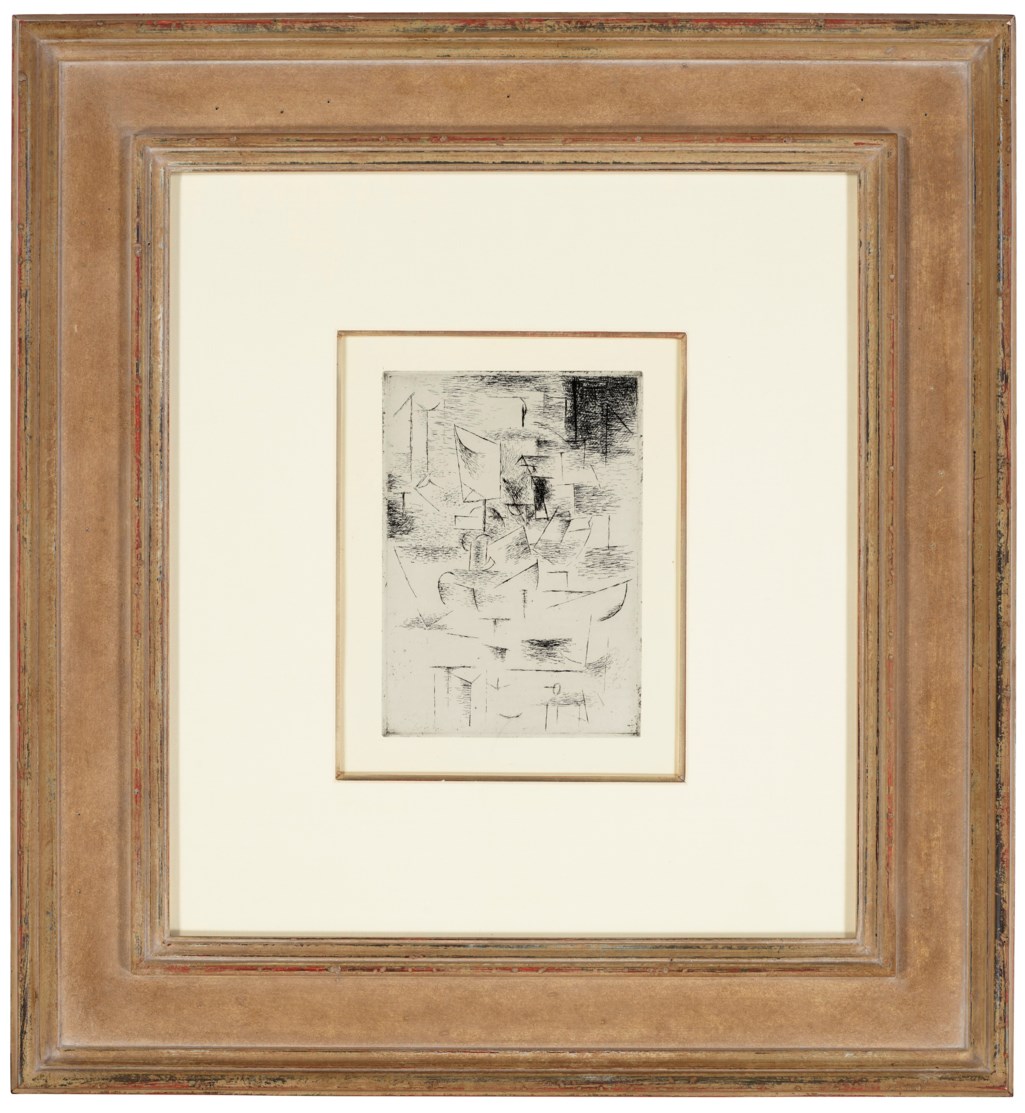 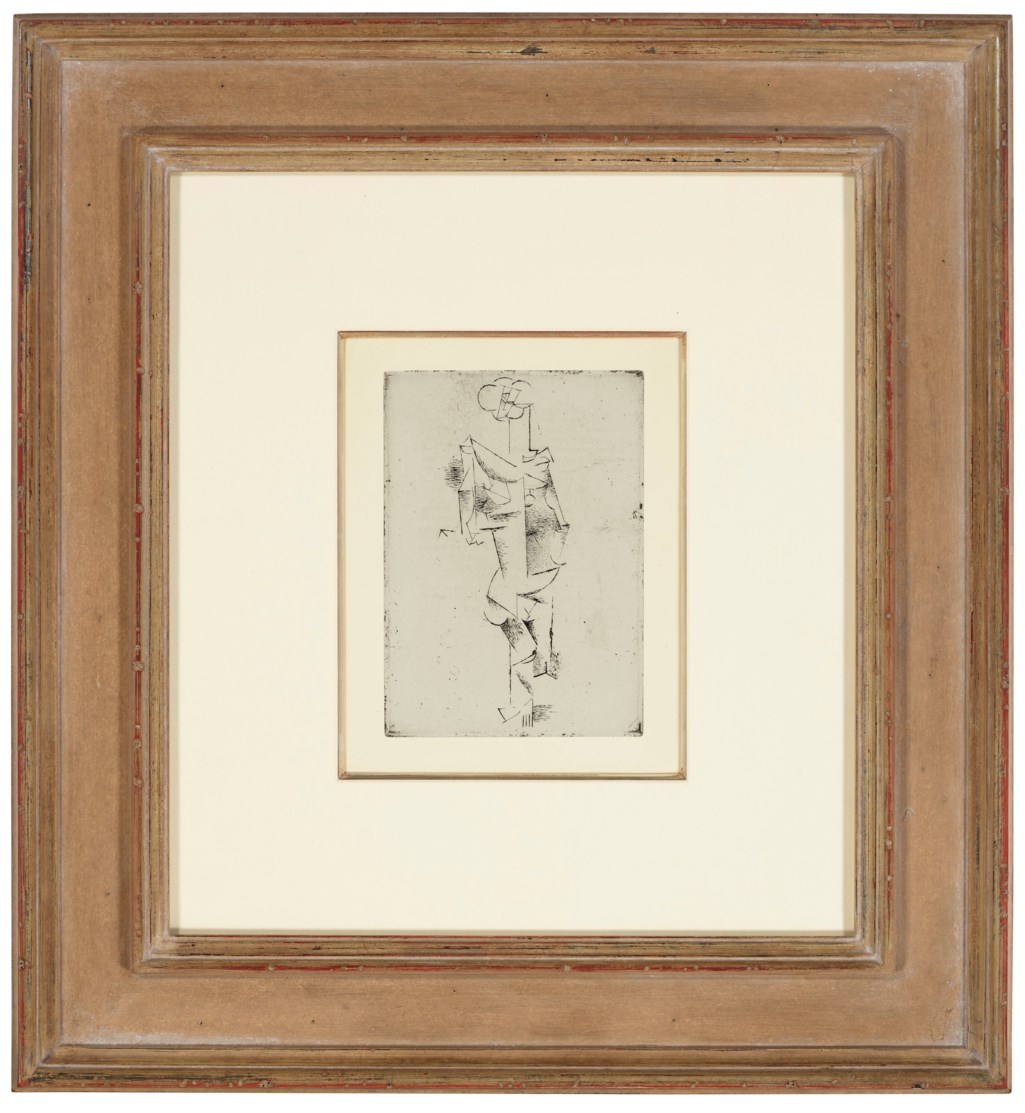 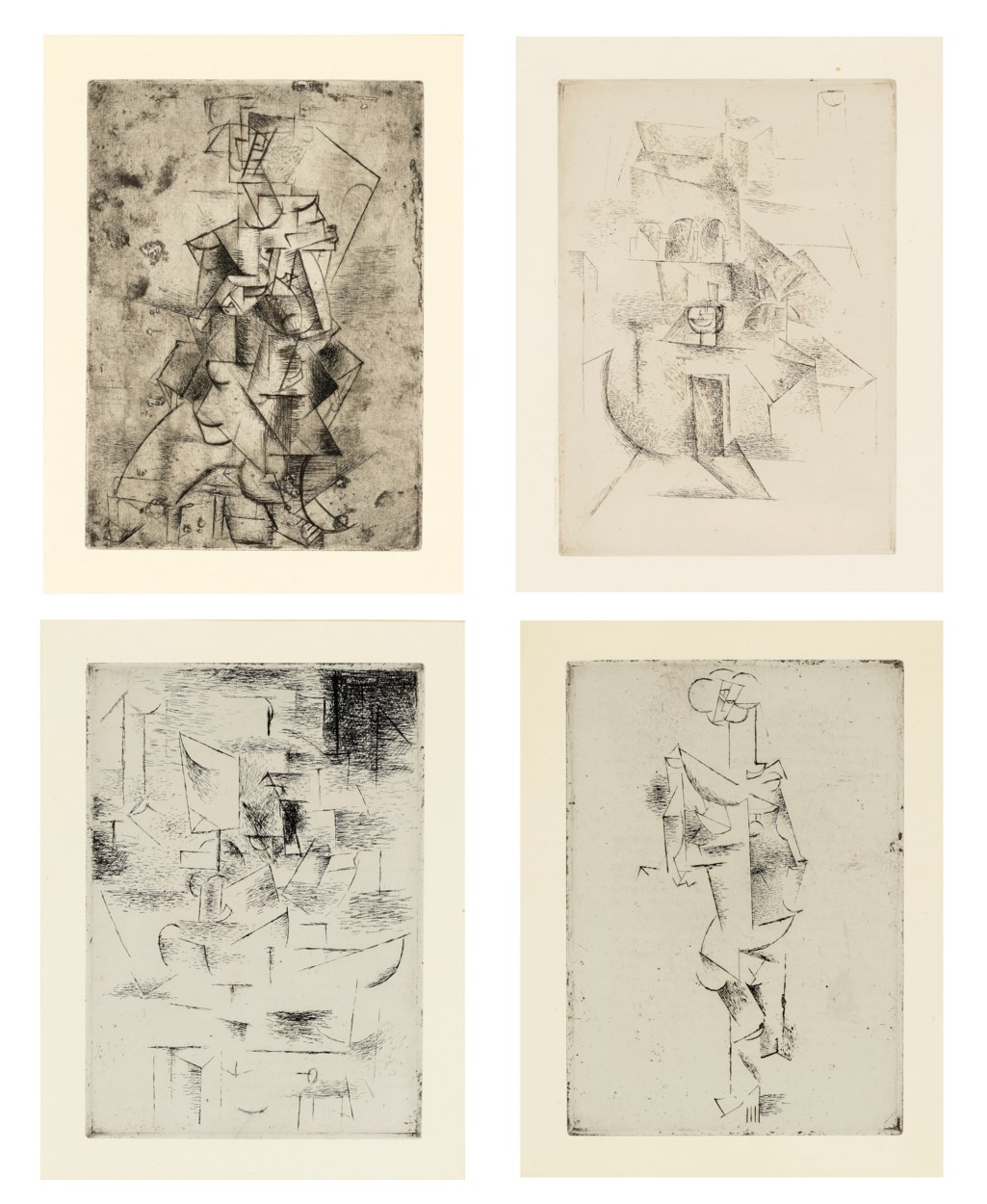 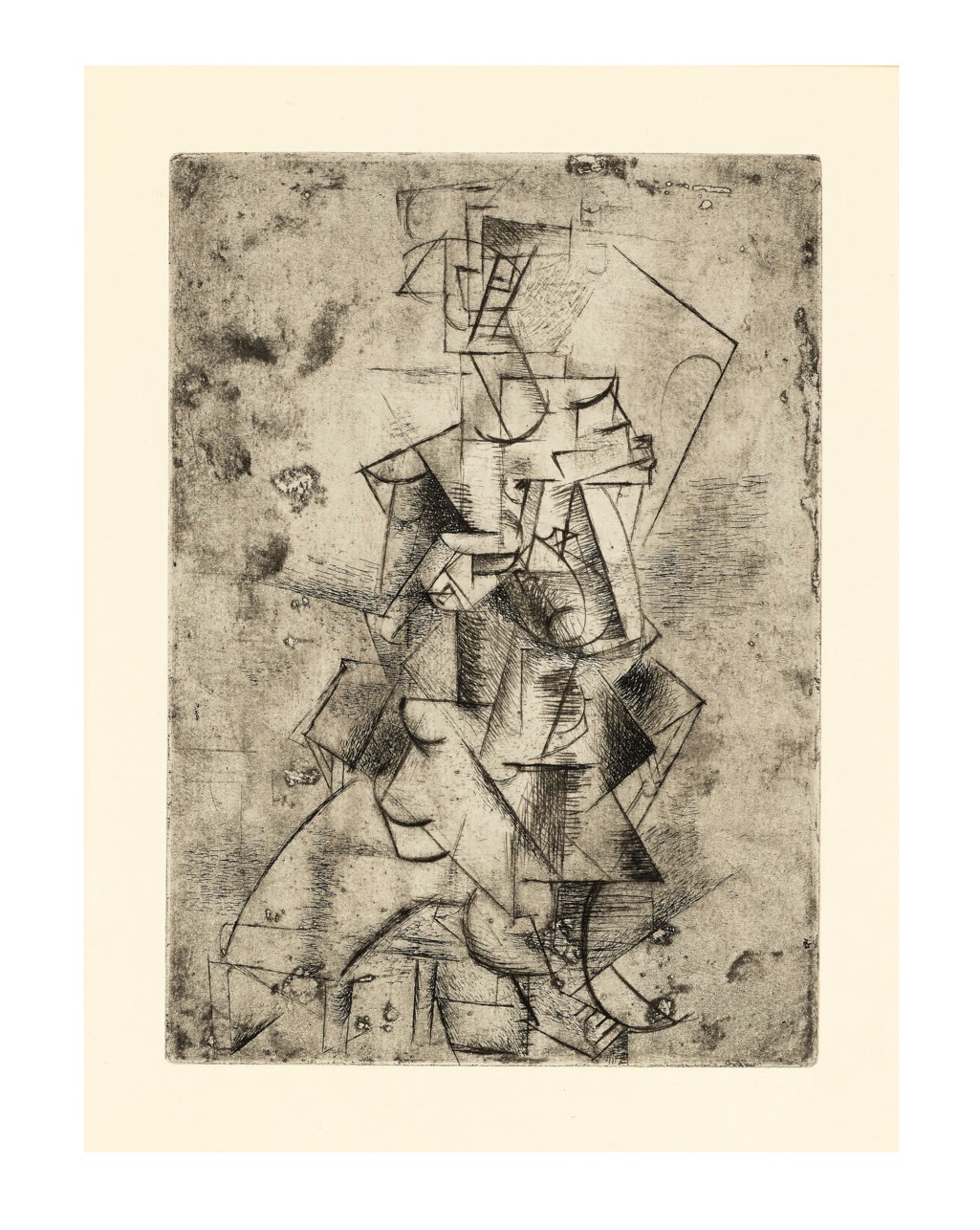 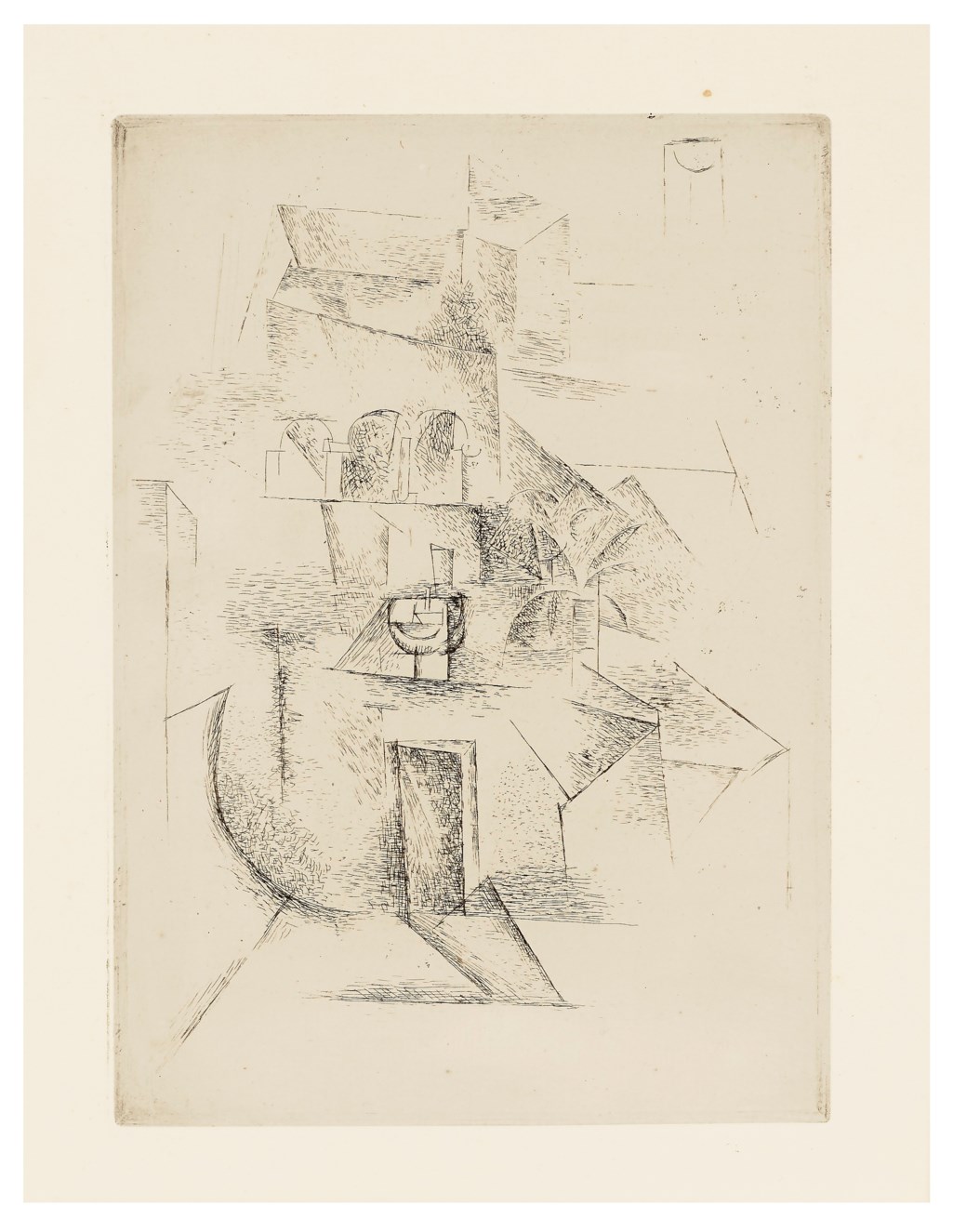 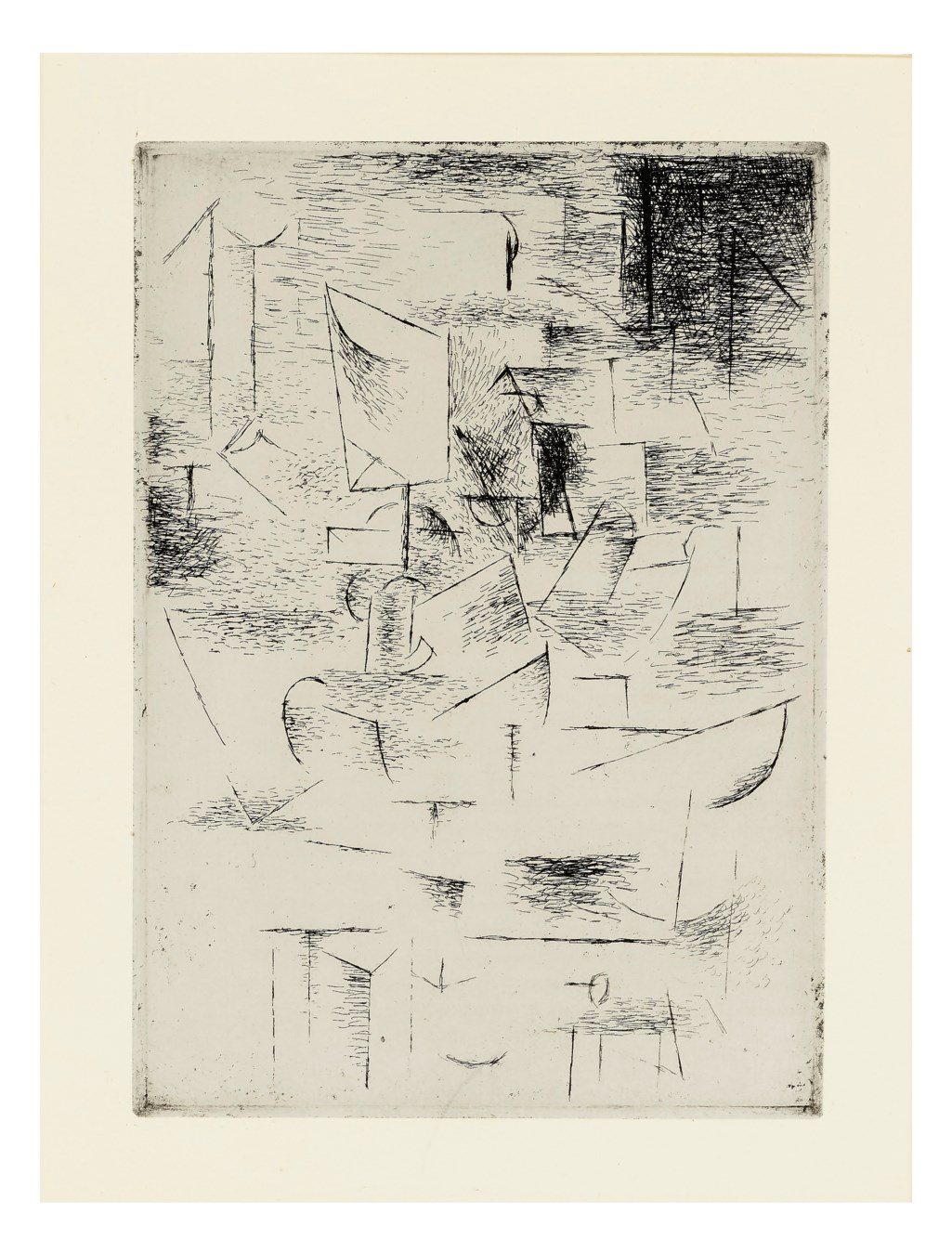 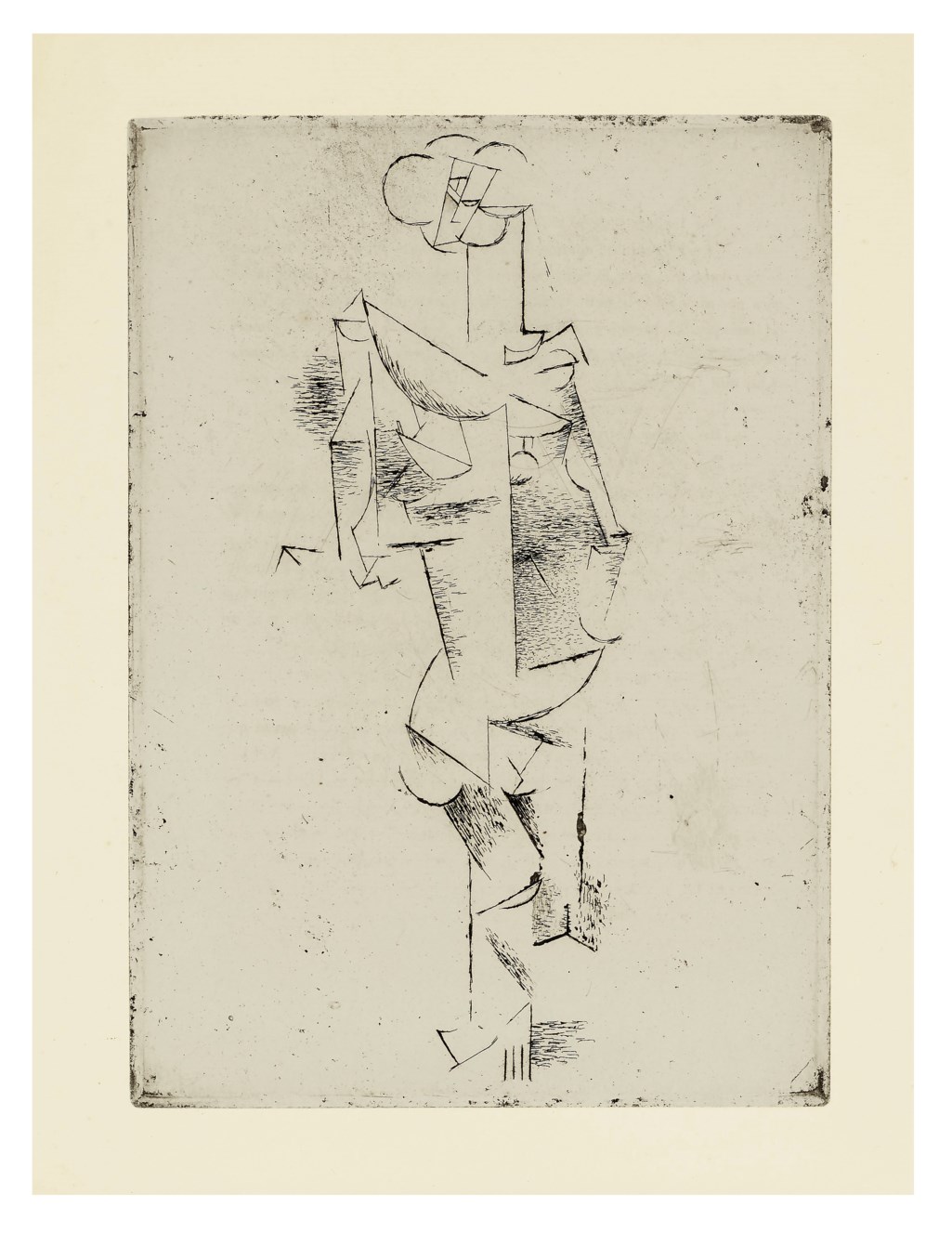 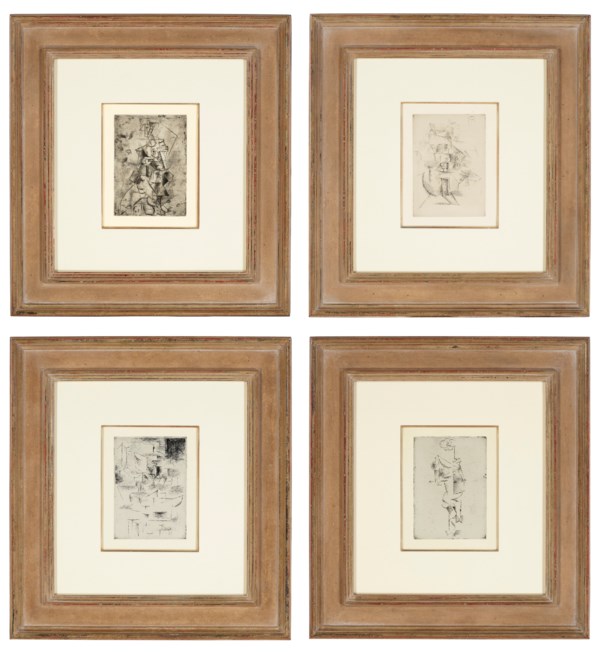 Lot 7
PABLO PICASSO (1881-1973)
Max Jacob, Saint Matorel, Henry Kahnweiler, Paris, 1911
USD 50,000 - USD 70,000
A Christie's specialist may contact you to discuss this lot or to notify you if the condition changes prior to the sale.
View Report
The condition of lots can vary widely and the nature of the lots sold means that they are unlikely to be in a perfect condition. Lots are sold in the condition they are in at the time of sale.

In addition to the catalogue description, the four etchings removed from the binding, each with wide margins, each with pale pinpoint foxmarks in places (primarily in the margins), hinged in places on the reverse sheet edges (slightly showing through in the margins), time staining, pale surface soiling and pinpoint foxmarks in places on the text pages, some of the bindng detaching, each etching framed

Please note that this lot consists of four framed prints.

Saint Matorel is a pivotal work in the history of the modern publishing venture, Picasso's first illustrated book in the medium of etching, and Max Jacob's first published text. That it came about is thanks largely to Kahnweiler's desire to promote the work of his contemporaries, regardless of the fact that they were either unknown or controversial. According to Fernande Olivier, Kahnweiler's gallery on the rue Vignon was a destination point for all those interested in going to see the 'movement nouveaux.…'
Kahnweiler commissioned Jacob to provide the text in September 1909, and the story tells of Victor Matorel, a minor employee in a Paris subway who converts to Catholicism, becomes a monk, and ends his life a saint. A second volume, entitled Le Siège de Jerusalem; Grande Tentation Céleste de Saint Matorel, published three years later, continued the story as a three act drama. André Derain, whom the publisher initially approached to provide the illustrations, agreed to design the publisher's device on the title page, but considered the project itself too risky. It was written in just 48 hours, composed in a discontinuous narrative, and combined multiple literary genres. Furthermore, Jacob undoubtedly wrote it whilst still in a visionary state, deeply affected by his own religious epiphany that very same month.
Kahnweiler had been an admirer of Picasso for many years, having been deeply impressed by his first exhibition at Vollard's in 1901, and it was to Picasso that he now turned. The artist agreed to provide the designs - primarily out of devotion to his old friend Jacob whom he had met on arriving in Paris eight years before, but also because he saw in this project an opportunity to explore certain ideas already nascent in the spring of 1910. Whilst staying in Cadaqués that summer with Fernande Picasso he produced a total of six etchings, of which four were finally selected. He touched only tangentially on the episodes in the life of Matorel, instead preferring to concentrate on three episodes; the scene in which the protagonist dines at an inn, the Lazarist monastery of Saint Teresa in Barcelona, and on Mademoiselle Léonie, the love-interest. He used these as springboards for innovations in spatial values across three genres; figurative, still-life, and landscape, and just as the text is to be understood symbolically so Picasso's illustrations should be seen as "formulas expressing the essence of the subject." (Abraham Horodisch, Picasso as a Book Artist, New York, 1962.)
For the first plate, in which Léonie is portrayed standing, the short, sparse lines and slanting diagonals communicate a certain vulnerability or delicateness. Meanwhile in the third plate where she sits on a chaise longue, numerous jutting cubes and triangles emanate from a central axis making the figure appears to rotate or vibrate. Jacob's text alludes to Léonie through unfinished conversations, and Picasso's dislocated planes brilliantly convey her capricious, ungraspable nature. Using similar devices for the final plate, the artist masterfully captures the brightness of the Spanish light refracted in myriad directions as it reflects off the monastery.
"[Picasso] still intended, in the usual way, to create visual representations of persons and objects appearing in the text, but the use of cubist constructions forced him to forgo realistic forms. Thus he had to create prints which, instead of actually illustrating the text, are visual equivalents inspired by the artistic tenor of the words. Although the result is not an illustration of the text in a strict sense, we feel that word and image have been brought into perfect harmony." (ibid.)
For an enterprise which at the time must have seemed like folly, we can now see Saint Matorel as ground-breaking, insofar as it was a catalyst for the birth of Analytical Cubism. Its success lies in the marriage of Jacob's broken text with Picasso's similarly asymmetric compositions and jarring lines. Far from being cold, or austere, the rhythmic interplay of forms in these etchings seems to emanate a vital force, or living energy.

Please note that this lot includes the complete book by the artist including all original text pages. The cataloguing on christies.com reflects this change.

Nourishment for the Soul: The Herrmann Collection of Prints by Pablo Picasso

Checkout
Continue Shopping
Nourishment for the Soul: The Herrmann Collection of Prints by Pablo Picasso