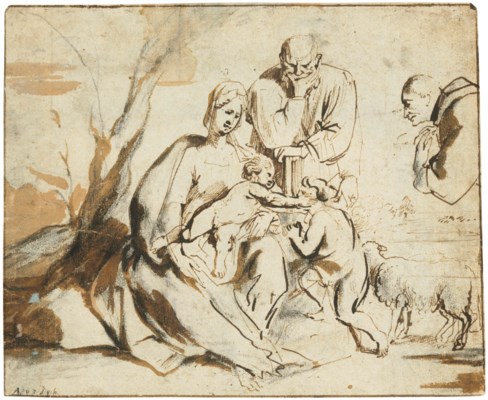 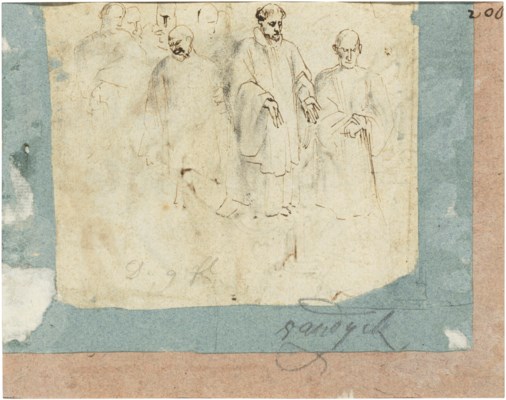 Previous Next
Lot 14 PROPERTY FROM A PRIVATE COLLECTION
Anthony van Dyck (Antwerp 1599-1641 London)
The Holy Family with the infant Saint John Baptist adored by a saint or patron (recto); A group of standing men in robes (verso)
Estimate: GBP 4,000 - GBP 6,000
LOT HAS ENDED
Condition report
Confirm Your Bid
Cost calculator
Or set your maximum bid below:

Lot 14
Anthony van Dyck (Antwerp 1599-1641 London)
The Holy Family with the infant Saint John Baptist adored by a saint or patron (recto); A group of standing men in robes (verso)
GBP 4,000 - GBP 6,000
A Christie's specialist may contact you to discuss this lot or to notify you if the condition changes prior to the sale.
View Report
The condition of lots can vary widely and the nature of the lots sold means that they are unlikely to be in a perfect condition. Lots are sold in the condition they are in at the time of sale.

Executed on laid paper and partially laid down along the edges on an old album mount. There is some scattered surface dirt and there aresome occasional small thin spots and losses along the edges. There is a 3 cm cut at the upper edge and there are some scattered creases. There is some further cockling to the paper, which is in otherwise good condition. The media have occasionally sunk somewhat, but they remain otherwise strong. Unframed.

Professor Michael Jaffé, and by inheritance to the present owners.

Neither side of this unpublished sheet can be related to known paintings by Van Dyck, but they are entirely typical for his pen sketches, or ‘crabbelinghe’, from his first Antwerp and Italian periods. Among the drawings to which the recto can be compared are studies for a Sacra Conversazione, dated at the end of the 1620s, at the Albertina and in Chatsworth (H. Vey, Die Zeichnungen Anton van Dycks, Brussels, 1962, I, nos. 97, 98, II, figs. 132, 133). The combined use of pen and wash over a rough sketch in black chalk left visible is often found in his drawn œuvre, as are the hatching and the stippling (for one example, see ibid., no. 13, II, fig. 18). He strengthened and corrected some of the finer lines with brusquer penwork, as was also his habit (ibid., I, nos. 2, 6, II, figs. 2, 9). The composition is inspired by a number of Venetian paintings of the same subject which he studied during his trip to Italy (see the Italian sketchbook at the British Museum, passim, and loose sheets catalogued in Vey, op. cit., nos. 148, 149, II, fig. 188-190; the second drawing is now at the Metropolitan Museum of Art, inv. 2005.253). Two original compositions by Van Dyck are also known (op. cit., I, nos. 115, 116, II, figs. 152, 153, catalogued, probably rightly, as old copies). The gesticulating men on the verso – apostles, priests, monks? – resemble those in a probably Biblical composition, for which the original drawing recently reappeared on the French art market, now in American private collection (for an old copy in a French collection, see ibid., I, no. 104, II, fig. 137).