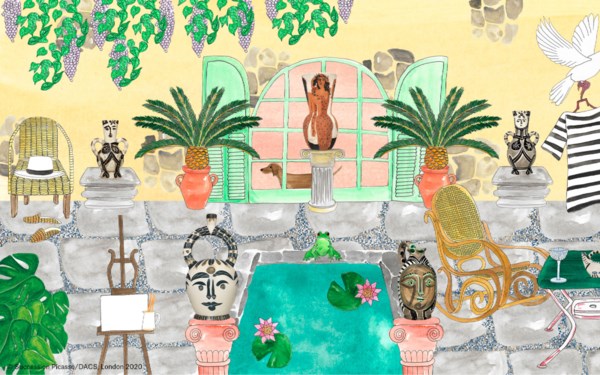 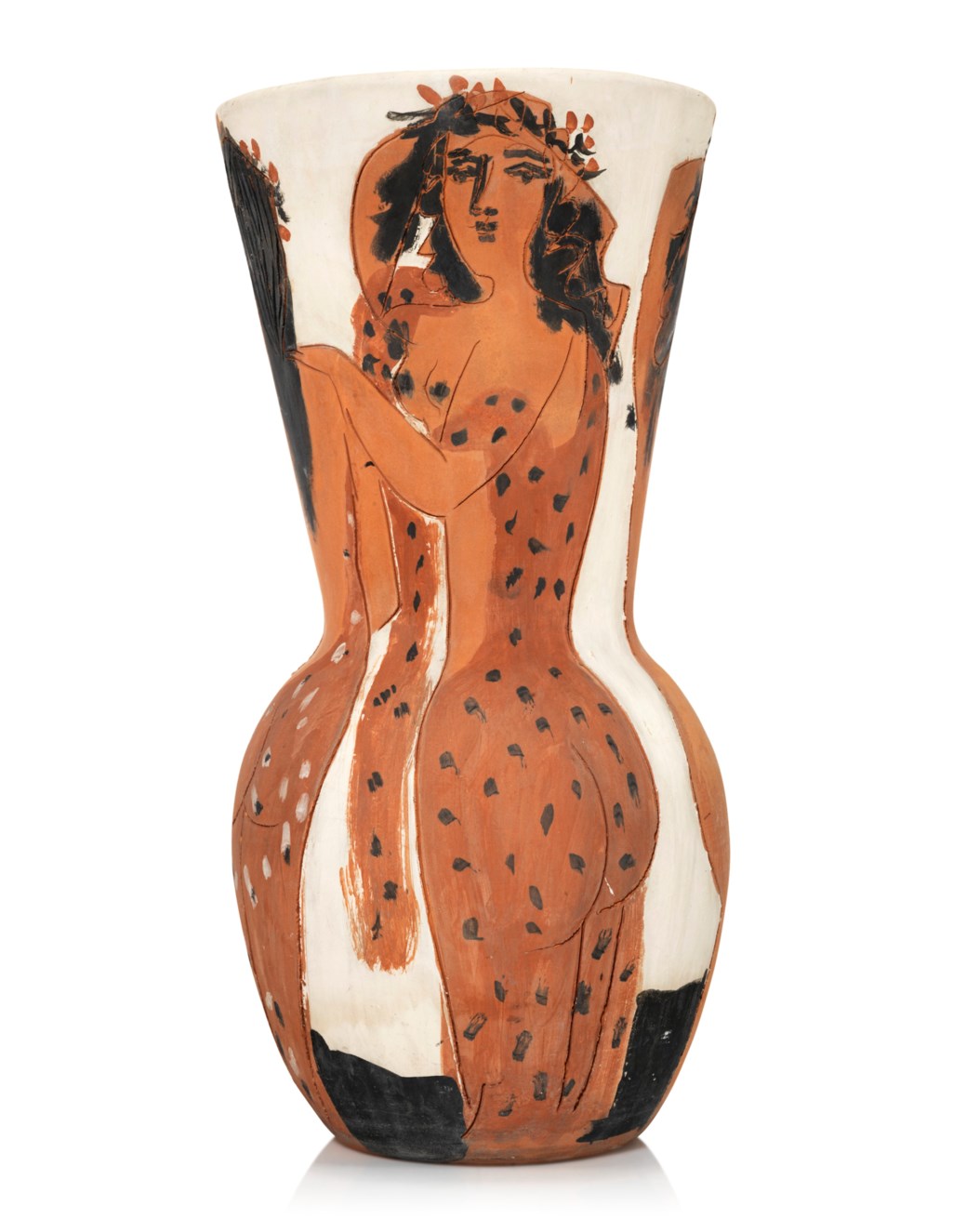 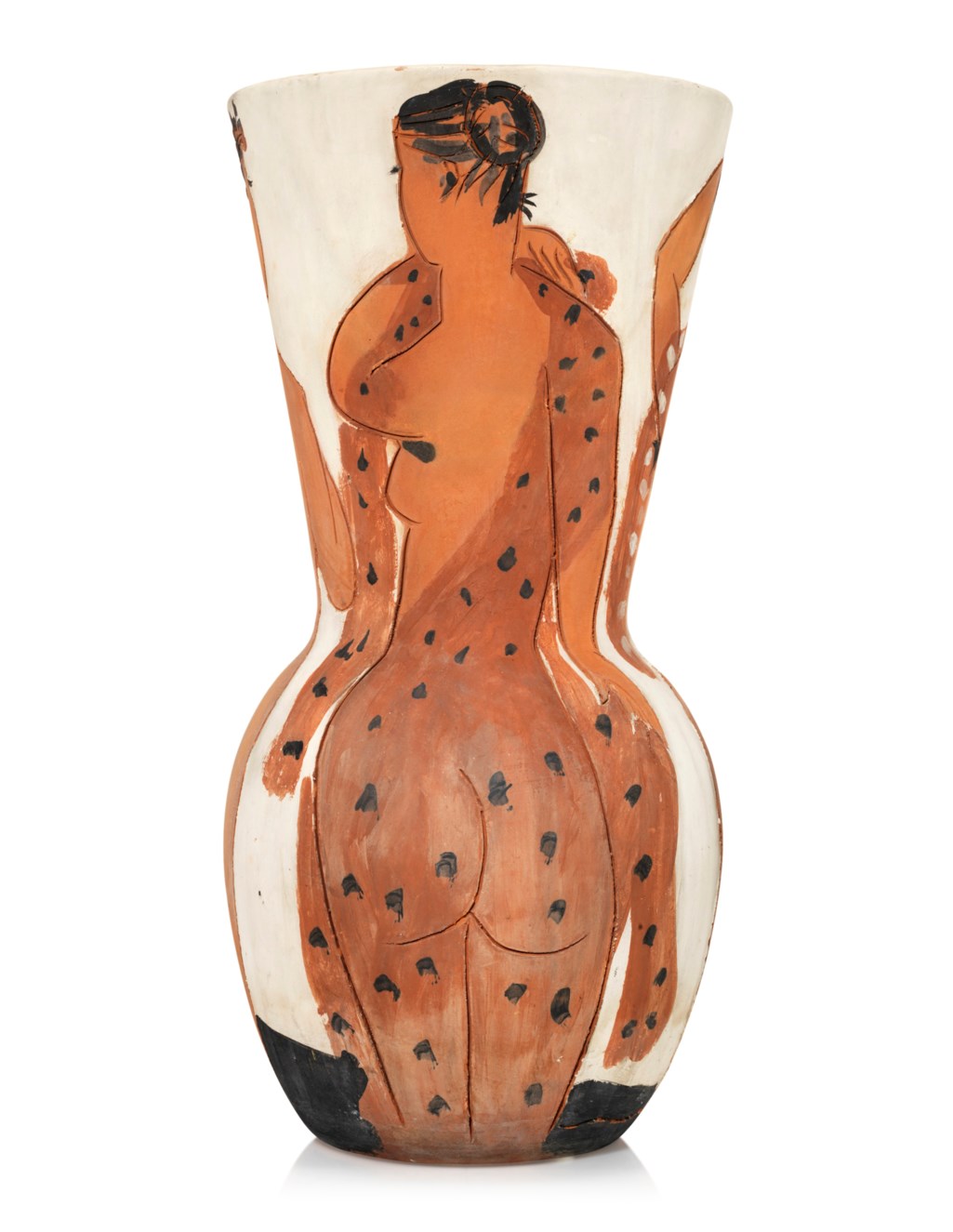 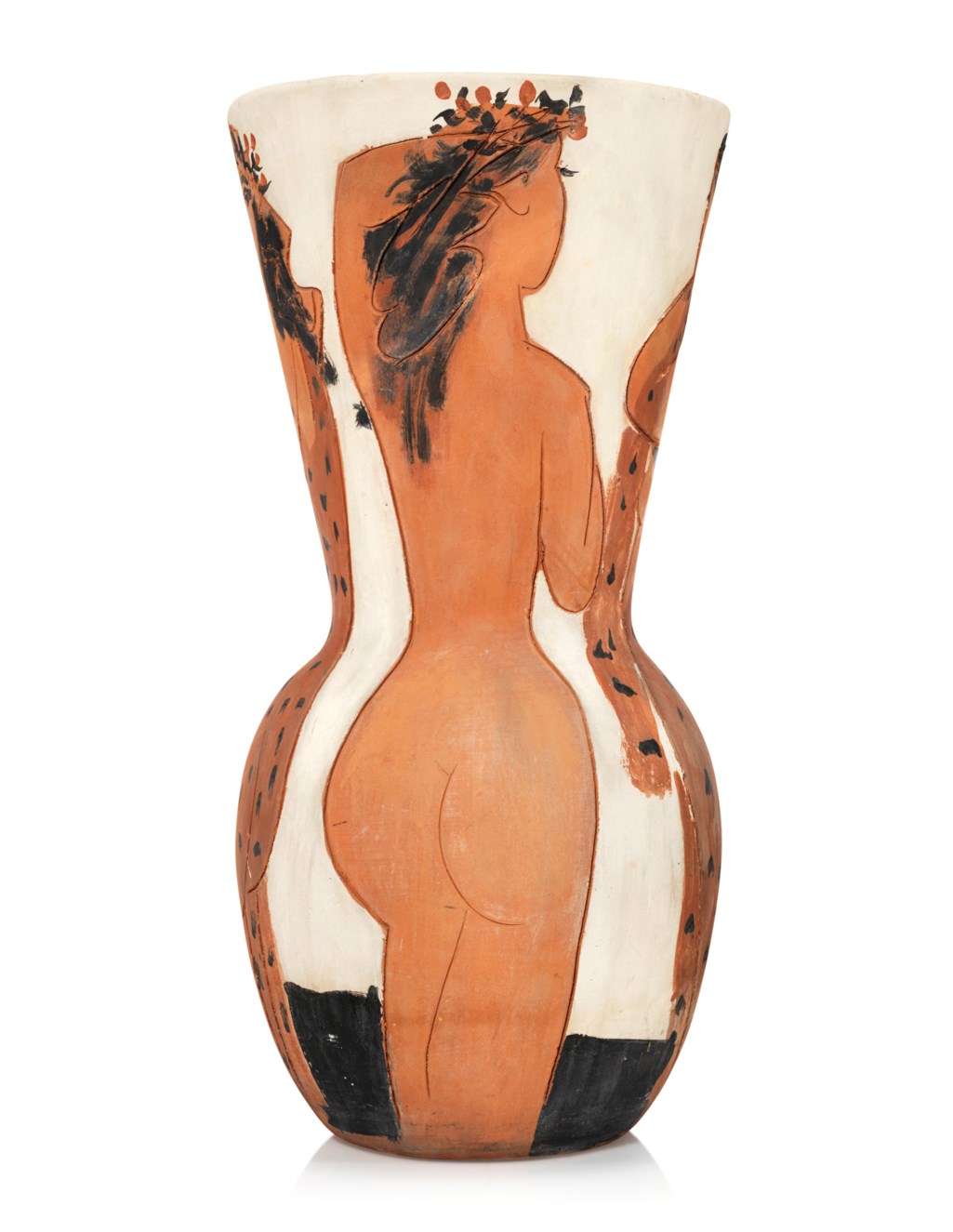 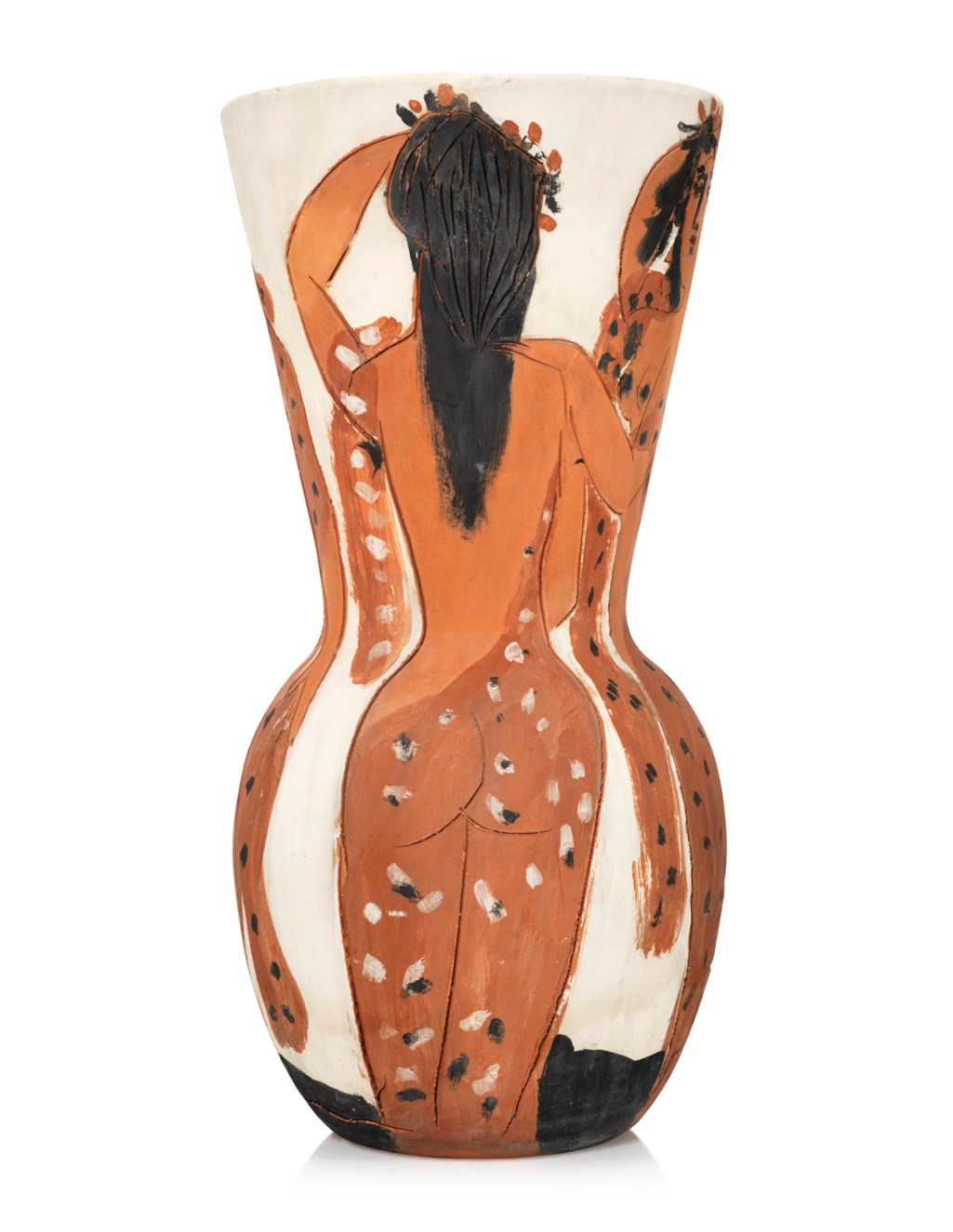 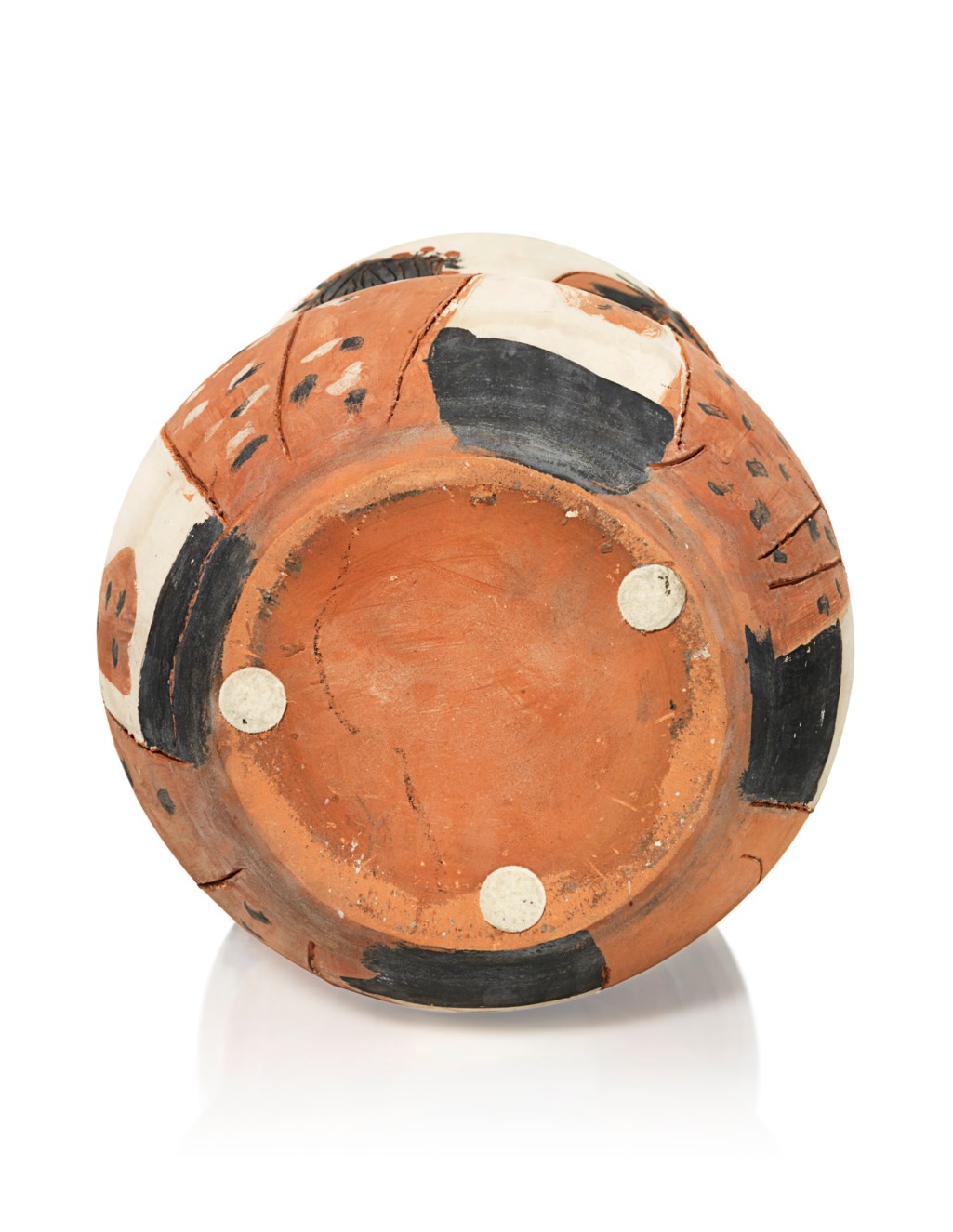 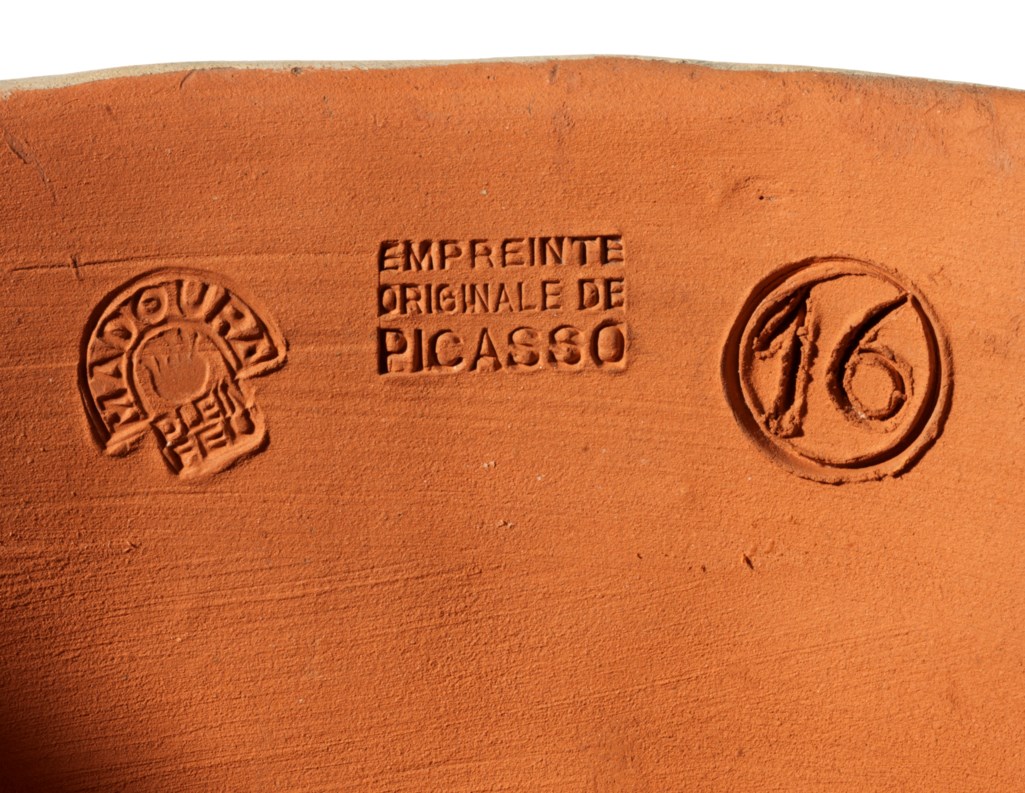 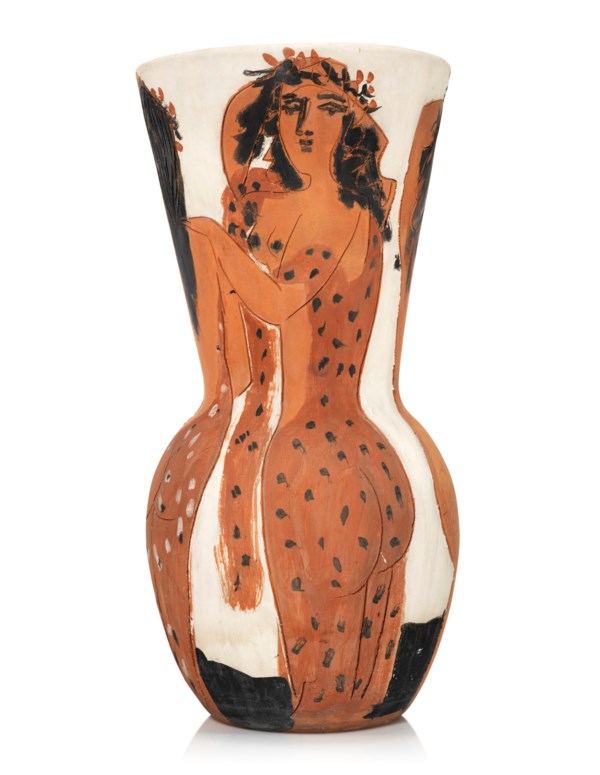 Lot 26
PABLO PICASSO (1881-1973)
Grand vase aux femmes voilées (A.R. 116)
GBP 100,000 - GBP 150,000
A Christie's specialist may contact you to discuss this lot or to notify you if the condition changes prior to the sale.
View Report
The condition of lots can vary widely and the nature of the lots sold means that they are unlikely to be in a perfect condition. Lots are sold in the condition they are in at the time of sale.

On close inspection, there is evidence of sympathetic restoration to the neck, mainly noticeable from the inside. The rim with a few small chips to the engobe. Some light scratches and minor scuff marks in places. Surface dirt in places, predominantly towards the bottom of the vase and to the rim. The underside with three felt pads. Subject to the foregoing, it is our opinion that the work appears to be in generally good condition.

Grand vase aux femmes voilées is one of Picasso’s most sought after ceramic works, highly prized for its small edition size, and large scale; standing at over 25 inches high, the vase is amongst the largest in his ceramic output. Illustrated on the front cover of Alain Ramié’s catalogue raisonné, the present work is an extremely rare piece, which scarcely is seen on the market.

Conceived in 1950, Grand vase aux femmes voilées is one of the finest examples of Picasso’s earliest ceramic work, produced only three years after Picasso moved to the Côte d’Azur in 1947 and began work alongside Suzanne and Georges Ramié at the Madoura pottery studio in Vallauris, a relationship which would span almost 30 years.

It is in these early examples of the 1950s, that we see not only Picasso’s most inventive pieces, but also his most classical works, as he reflected on the long history of the region’s most traditional art form. Vallauris had ancient associations with the practice of ceramic making, being a centre for ceramic production since Roman times, known for its amphorae production produced from the local, rich distinctive pinkish and reddish clay, the lineage of which is continued in the present work in the warm tones of the terracotta.

The decoration, which consists of four veiled women, undoubtedly evokes the antique, in both its iconography, and colour palette. The wonderful textured surface made of a white engobe background; the black and ochre detailing in the base, hair and drapery; and the soft, creamy tones of the smooth, bare terracotta simulating the look and touch of bare skin, recalls classical prototypes, harking back to the black and red figure pottery of ancient civilisations. Picasso in particular seems to draw inspiration from the canonical Graeco-Roman motif of The Three Graces, or in ancient Greece, The Charites, an image which has captured the attention of artists from antiquity through to the modern day.

Appreciated by the artist as a creative medium in its own right, Picasso enjoyed the interplay between the two dimensional and the three dimensional, and the opportunities presented by a medium which incorporated both sculpture and painting, whilst still remaining a functional item. In the present work we see his early attempts to master the medium, experimenting with the combination of painting, incising, and the effects of different engobes, achieving in so doing an uncommonly wide and sculptural object.

Possibly influenced by the artist's then companion Françoise Gilot, the figures as well as the curvature of the vase itself emphasises and accentuates the female form. The hourglass form of the vase here is enhanced and celebrated through its comparison with the feminine form of Picasso’s curvaceous models, elegantly rotating around the outer surface, the sensual hips of his figures correlating to the same curves and proportions of the vessel upon which they are painted. As such, Picasso investigates not only the painterly qualities of ceramic, but approaches it furthermore as an investigation of the feminine archetype and a study of volume.

Artist's Resale Right Regulations 2006 apply to this lot. You must pay us an extra amount equal to the resale royalty and we will pay the royalty to the appropriate authority. Please see the Conditions of Sale for further information.