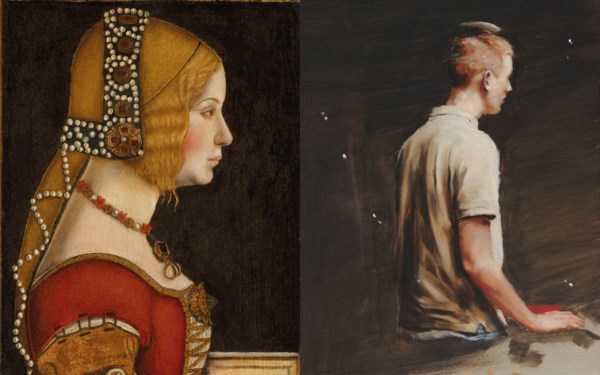 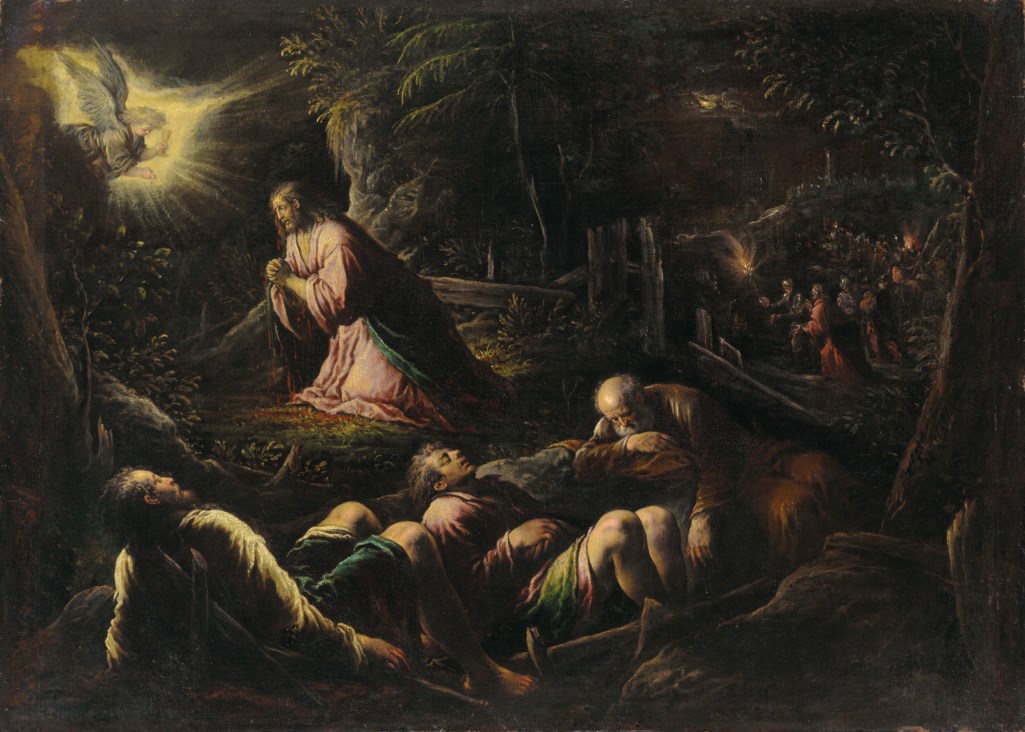 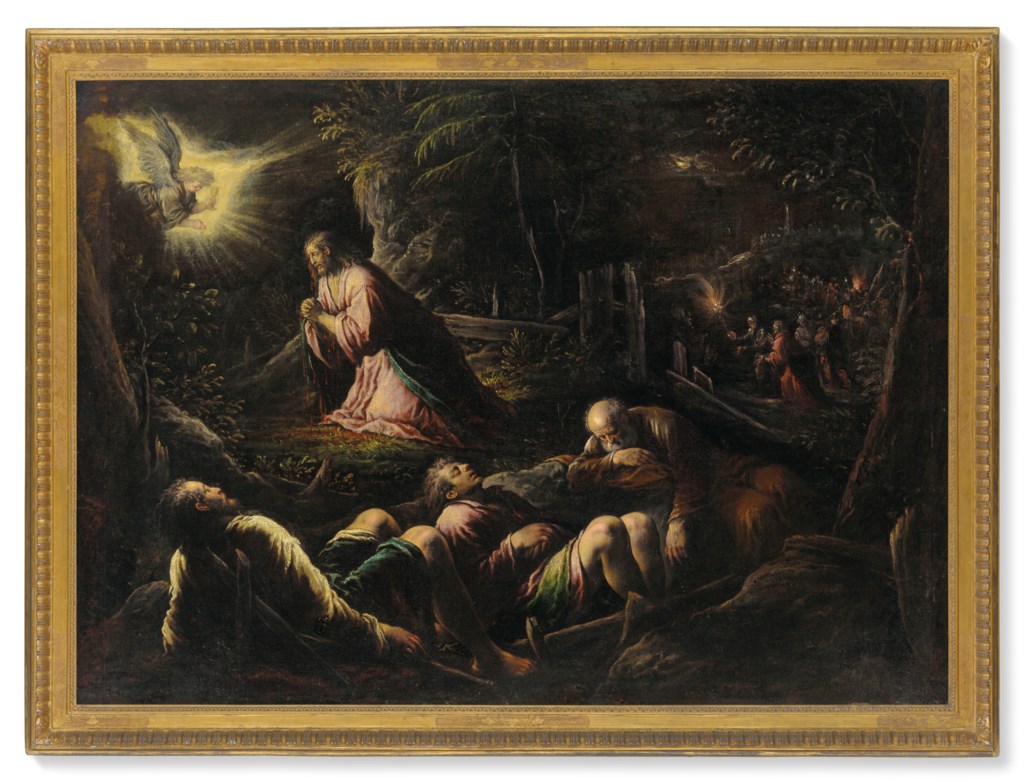 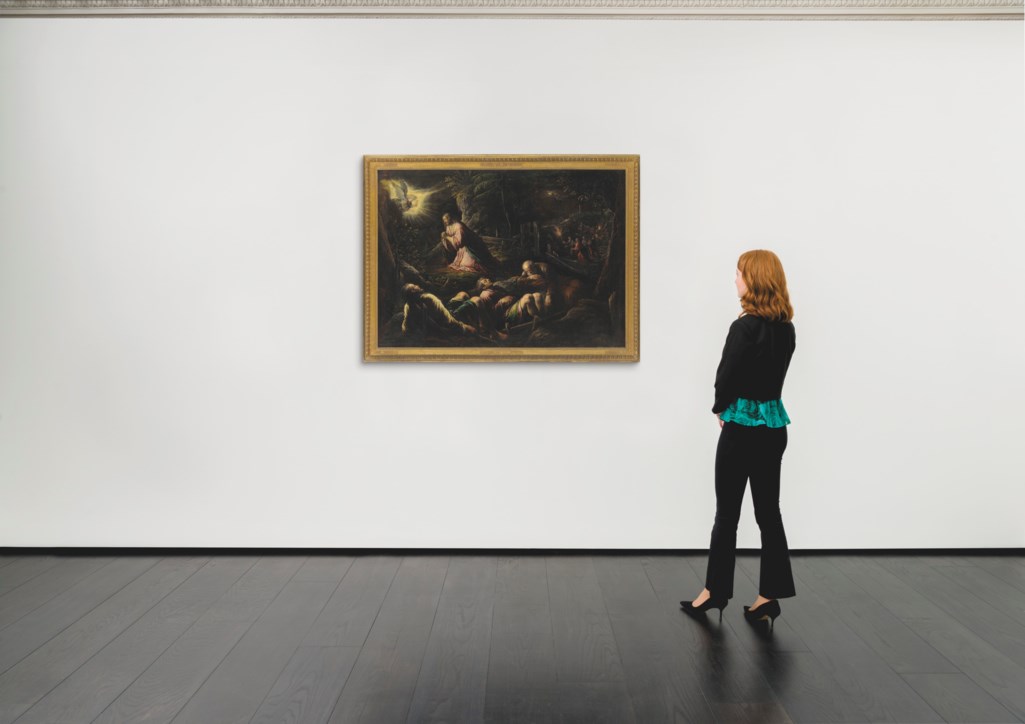 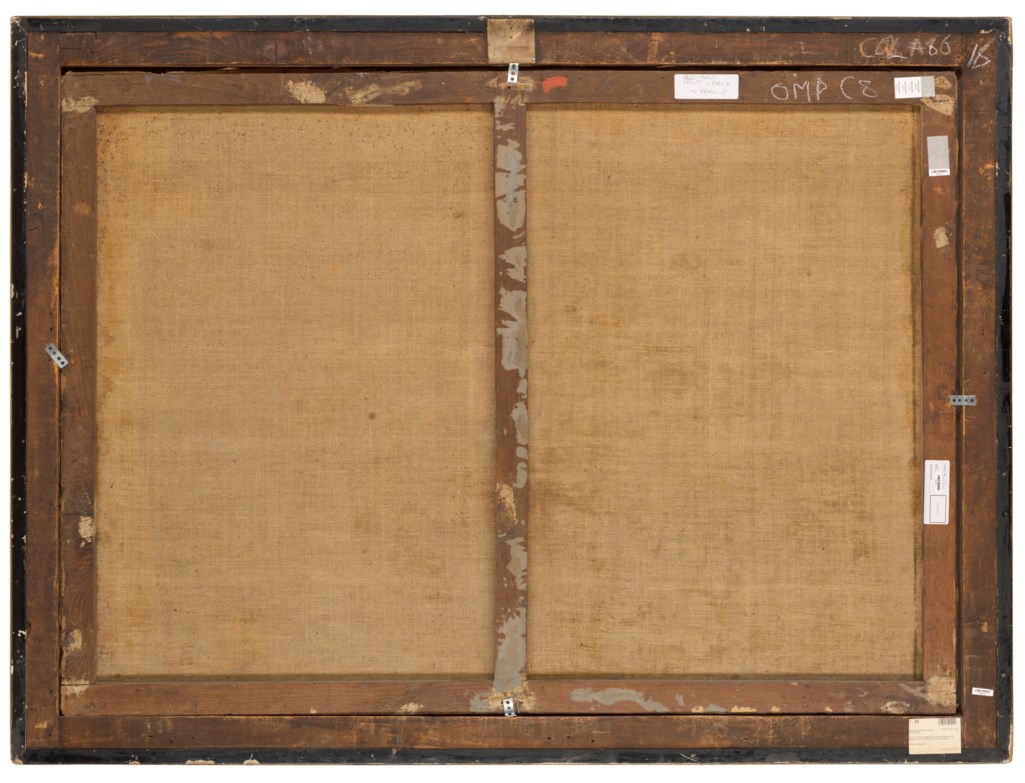 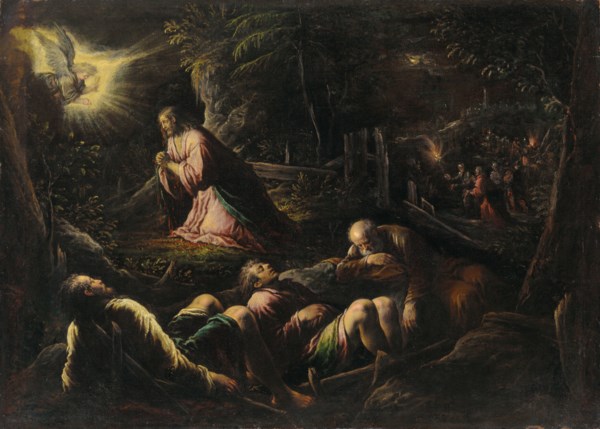 Lot 12
JACOPO DA PONTE, CALLED JACOPO BASSANO (BASSANO DEL GRAPPA C. 1510-1592)
The Agony in the Garden
GBP 150,000 - GBP 250,000
A Christie's specialist may contact you to discuss this lot or to notify you if the condition changes prior to the sale.
View Report
The condition of lots can vary widely and the nature of the lots sold means that they are unlikely to be in a perfect condition. Lots are sold in the condition they are in at the time of sale.

Overview
The painting would appear to be in relatively good condition and the historic losses to the face and the associated discoloured retouching should be noted.

Structural Condition
The artist's panel which has a slightly convex profile.

Paint Surface
The paint surface has an uneven degraded varnish layer. There is a scratch within the background in the upper right.
The paint surface displays an overall pattern of raised vertical lines of craquelure with some associated tented paint and slight instability, most notably a blister on the sitter's collar. There are also some historic vertical lines of paint loss associated to the craquelure which appear to have been retouched, including within the sitter's face.

Jacopo Bassano, the son of a painter, Francesco, to whom he was apprenticed at Bassano, north-west of Venice, evolved a wholly personal and realistic style, influenced by prints and by the example of his major Venetian contemporaries, Titian and Tintoretto. He in turn was hugely influential on younger artists, including El Greco and Annibale Carracci; and the workshop he built up was maintained by his surviving sons, Leandro and Gerolamo until their deaths in 1622 and 1621 respectively. Justly celebrated for his altarpieces, Bassano was a pioneer as a painter of genre scenes and clearly had a particular interest in nocturnes, anticipating in some respects Elsheimer and Saraceni who would have had ample opportunity to examine pictures by him in Venice. First published by Roger Rearick in 2004, this canvas is a key late example of this speciality of the artist, Rearick proposing a date about 1575: Ericani, in the 2010 exhibition catalogue, dates this variously to 1575-8 and, at the foot of her entry, to the 1570s (her reference to the ‘ottavo decennio’ is incorrectly given as the 1580s in the English translation).

Radiographs taken at the Louvre exhibition in 2009 (see Ericani in the 2010 catalogue) reveal pentimenti in the head of Saint Peter, the bald disciple on the right, and also that Bassano initially conceived a bright area of light below the angel, implying the primacy of the picture over the version of this at Modena (Galleria Estense, no. 416). Throughout his career, Bassano had a tendency to reconsider favourite, or popular, subjects, as for example the sequence of his earlier treatments of the Flight to Egypt or the Adoration attest. In addition to this canvas, he at much the same date, about 1575, as Professor Ballarin recognised (Jacopo Bassano, Scritti 1964- 1995, Cittadella, 1995, II, pp. 107-8 and 347-9), painted the smaller upright Agony in the Garden at Burghley (Exeter Collection) as well as the horizontal repetition of this picture at Modena. Writing before the emergence of the picture under discussion, Ballarin identified a drawing in the Louvre (no. 2897, datable to 1575 as a study on the reverse relates to a fresco of that year) as a study for the Saint Peter in the Modena picture: it was no doubt reused for that work. Ericani observed (2009-10 catalogue, p. 408) that this picture was ‘en effet la modèle d’un sujet souvent reperis par la suite’, a view endorsed by Galansino (p. 437, note 144). The variations between it and the Burghley picture are subtle, exemplifying the way Jacopo redeployed favourite and successful motifs: in the chromatically more muted Burghley canvas Christ is seen in profile perdu, his arms outstretched, while the angel descends; the disciple on the left corresponds with his counterpart in this picture, but his companions, John and Peter, are different in design, if not in characterisation.

The subject was in turn treated by Bassano’s eldest son, Francesco, on at least three occasions, in pictures now at Lucca, at Sarasota and at Bassano: of these, the vertical composition at Sarasota reverses the position of Christ, and shows him with hands held apart, while following the Saint Peter and the Saint John of the picture under discussion; in the less emphatically vertical work at Bassano the composition adheres as closely as the format allowed to this prototype, but also shows Christ with his hands held apart and, as in the Sarasota Agony, places the disciple on the left in a pose better adapted for the shape of the canvas. The several horizontal versions of the subject executed in the Bassano workshop depend very closely on the design of this picture, but mostly eliminate the section on the right. Of these, one was sold in these Rooms, 20 July 1983, and another successively at Sotheby’s, London, 9 December 1987, lot 280 and 11 December 1996, lot 127; one, evidently of good quality, with the addition of a prominent rabbit, was sold at Sotheby’s Monaco, 6 December 1991, lot 245; another, in which Christ’s hands are held apart, with different figures of Saints John and Peter, was with the Wightman Gallery, Indiana; a fine picture from Wardour, with Agnew’s in 1956, corresponds except in the pose of Saint Paul; another, given to Francesco, also with Christ’s hands held apart and omitting the right section of the composition, is in the Galleria Nazionale, Rome; a variant corresponding with that work in the pose of Christ was sold by Fischer, Lucerne, 20-1 June 1975, lot 4; while a canvas with alterations to the figure of Christ was with Duits in Amsterdam. That so many derivations of the picture are recorded testifies to the immediate popularity of the composition, and reminds us that in the context of the 1570s this Agony in the Garden was a work of profound originality.