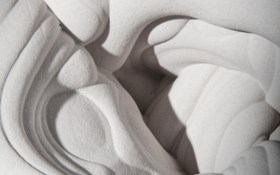 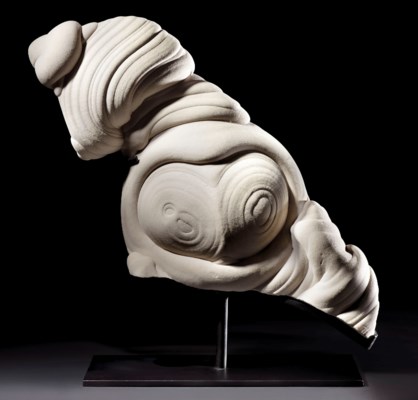 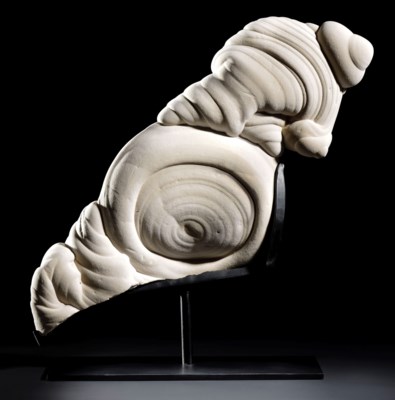 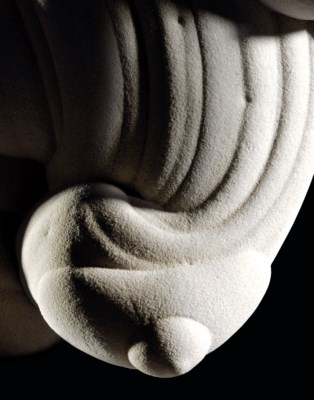 Lot 61
A VERY LARGE GOGOTTE FORMATION
FONTAINEBLEAU, FRANCE
GBP 6,000 - GBP 9,000
A Christie's specialist may contact you to discuss this lot or to notify you if the condition changes prior to the sale.
View Report
The condition of lots can vary widely and the nature of the lots sold means that they are unlikely to be in a perfect condition. Lots are sold in the condition they are in at the time of sale.

In very good condition with extraction mark along base and usual light marks and stable hairline cracks expected in a gogotte of this size.

Gogottes are beautiful and beguiling mineral formations. Once thought to have been composed from chalk, they are actually the rare and entirely natural result of calcium carbonate binding with extremely fine quartz grains. Each sculptural layer is a unique composition from the mineral-rich waters of Fontainebleau, northern France, with the shapes evoking clouds and tangible representations of dreamlike imagery. The mineralization process takes place over the course of approximately 30 million years, with every formation a uniquely shaped wonder. As a prime example of the blend between nature and art, gogottes can be appreciated as sandstone variants of the Gongshi (scholar’s rocks) tradition.
These sandstone concretions boast an international popularity and an acclaimed reputation spanning centuries. As early as the late seventeenth century for example, gogottes were lauded for their aesthetic by the highest echelons of French nobility. Louis XIV “the Sun King” of France (r. 1643-1715) was so enamored by these formations that he ordered extensive excavations around Fontainebleau, in order to decorate his palace gardens. Gogottes still adorn L’Encelade, Les Trois Fontaines, and La Salle de Bal at Versailles, and continue to enchant and delight visitors as they have for over 300 years.
It is perhaps unsurprising that gogottes served as inspiration for artists well into the 20th century. As dynamic snapshots of elemental metamorphosis, they were particularly well received by impressionist and surrealist sculptors. In particular, the recumbent figures by Henry Moore, and white marble compositions by Jean Arp (S’accroupissant, 1960-1962) and Louise Bourgeois (Cumul I, 1969) all evoke the arresting and unpredictable formations of gogottes. More recently, a large specimen was gifted to London’s Natural History Museum, in honour of naturalist and broadcaster David Attenborough’s 90th birthday. Large intact sandstone concretions are uncommon, and rarer still are examples with fine, unblemished and milky-white surface.
Post Lot Text
Please refer to the storage and collection terms as set out in the terms and conditions.