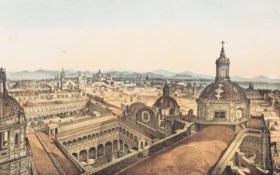 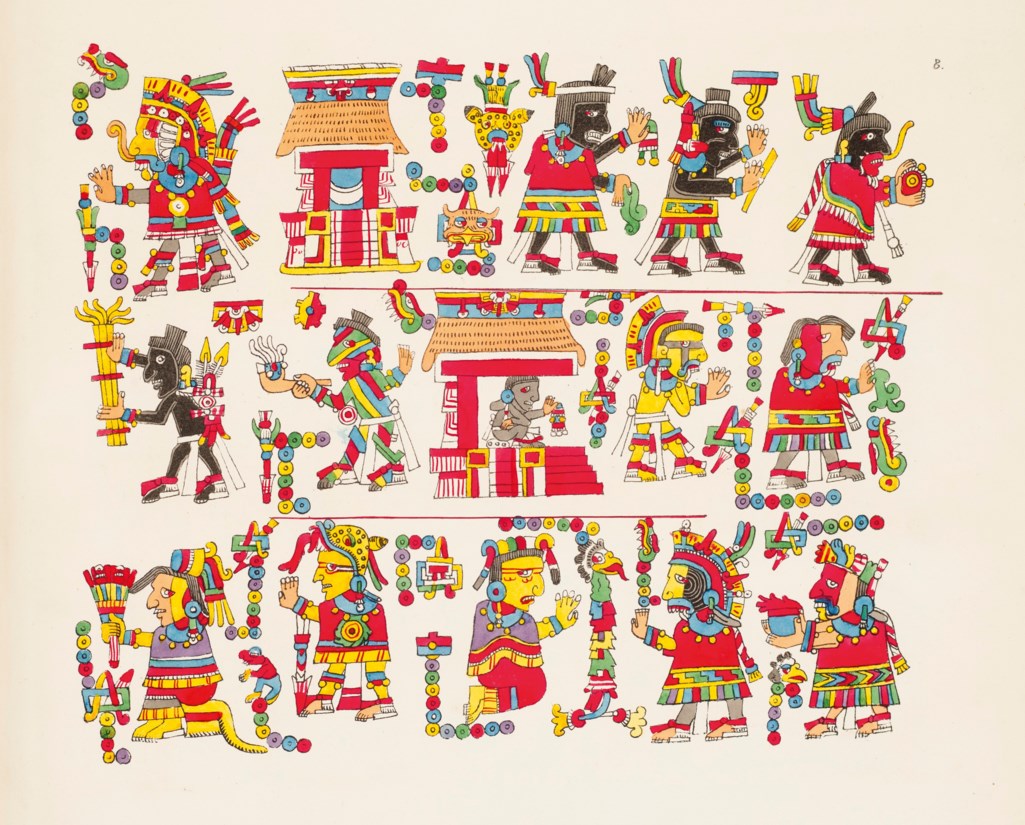 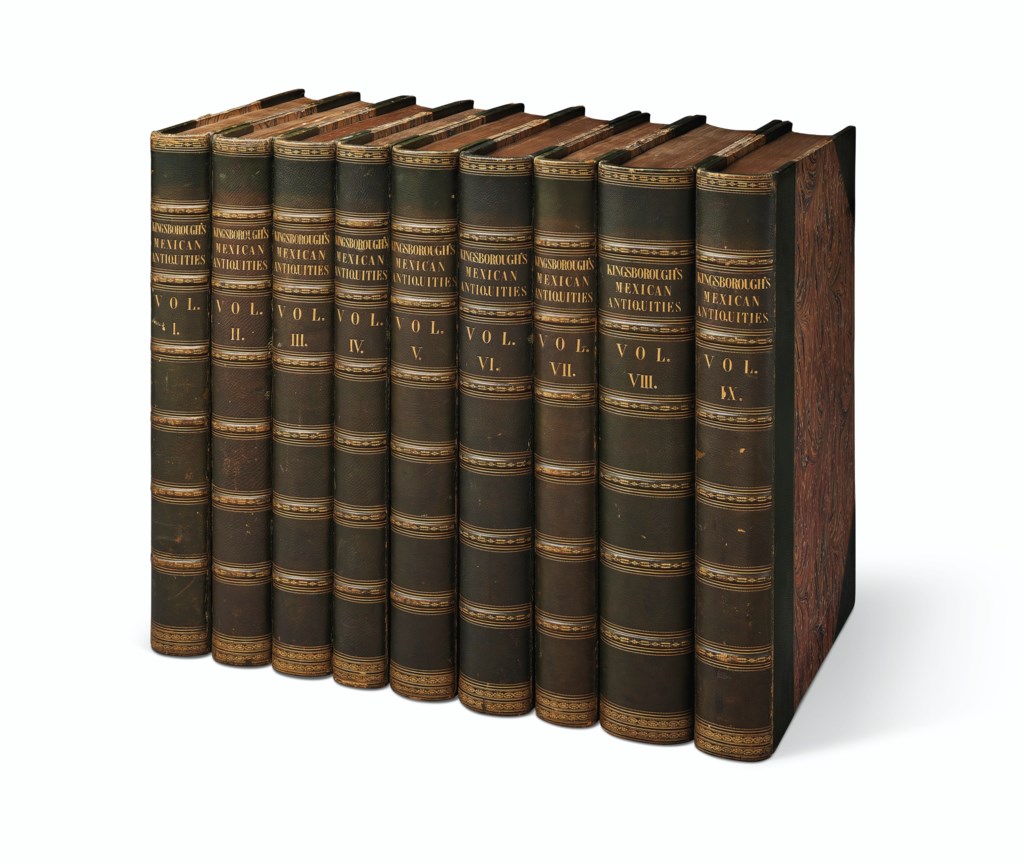 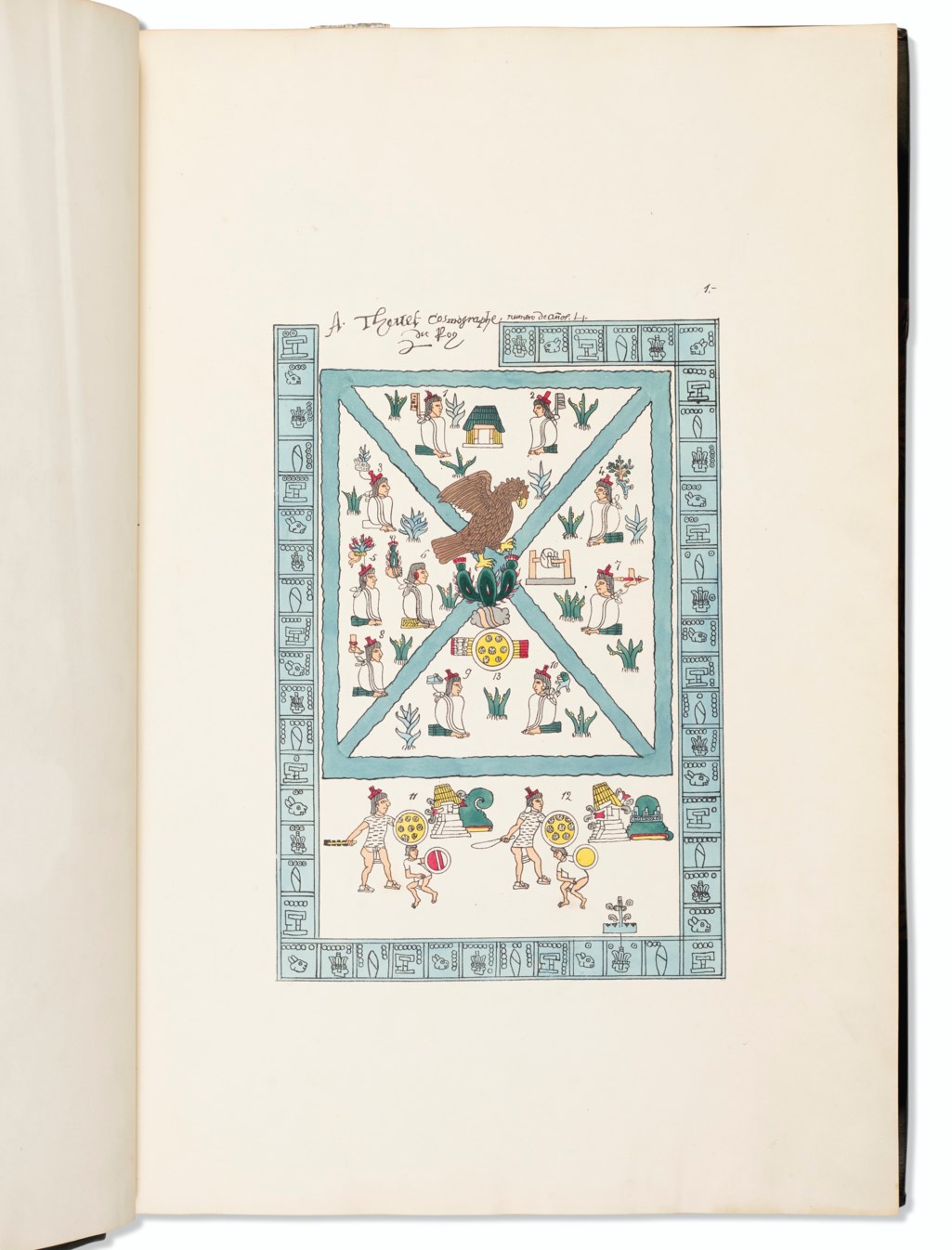 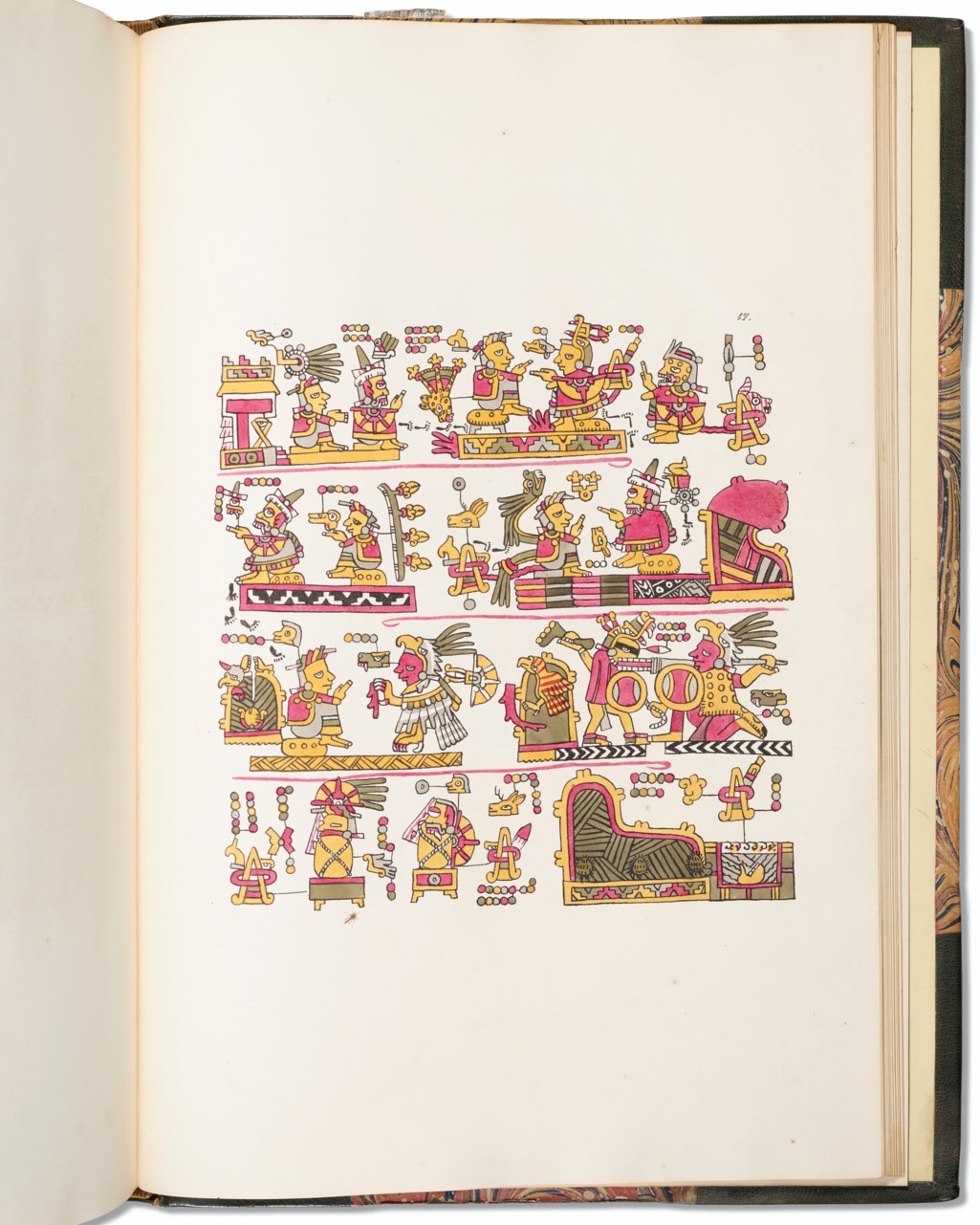 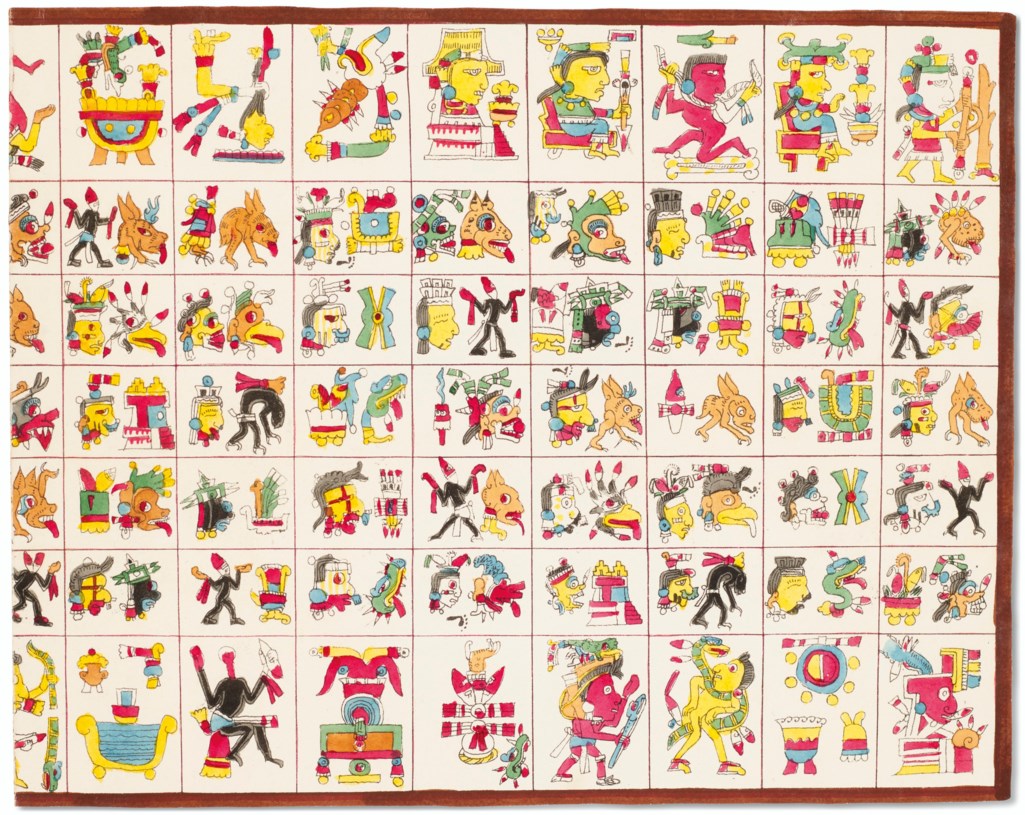 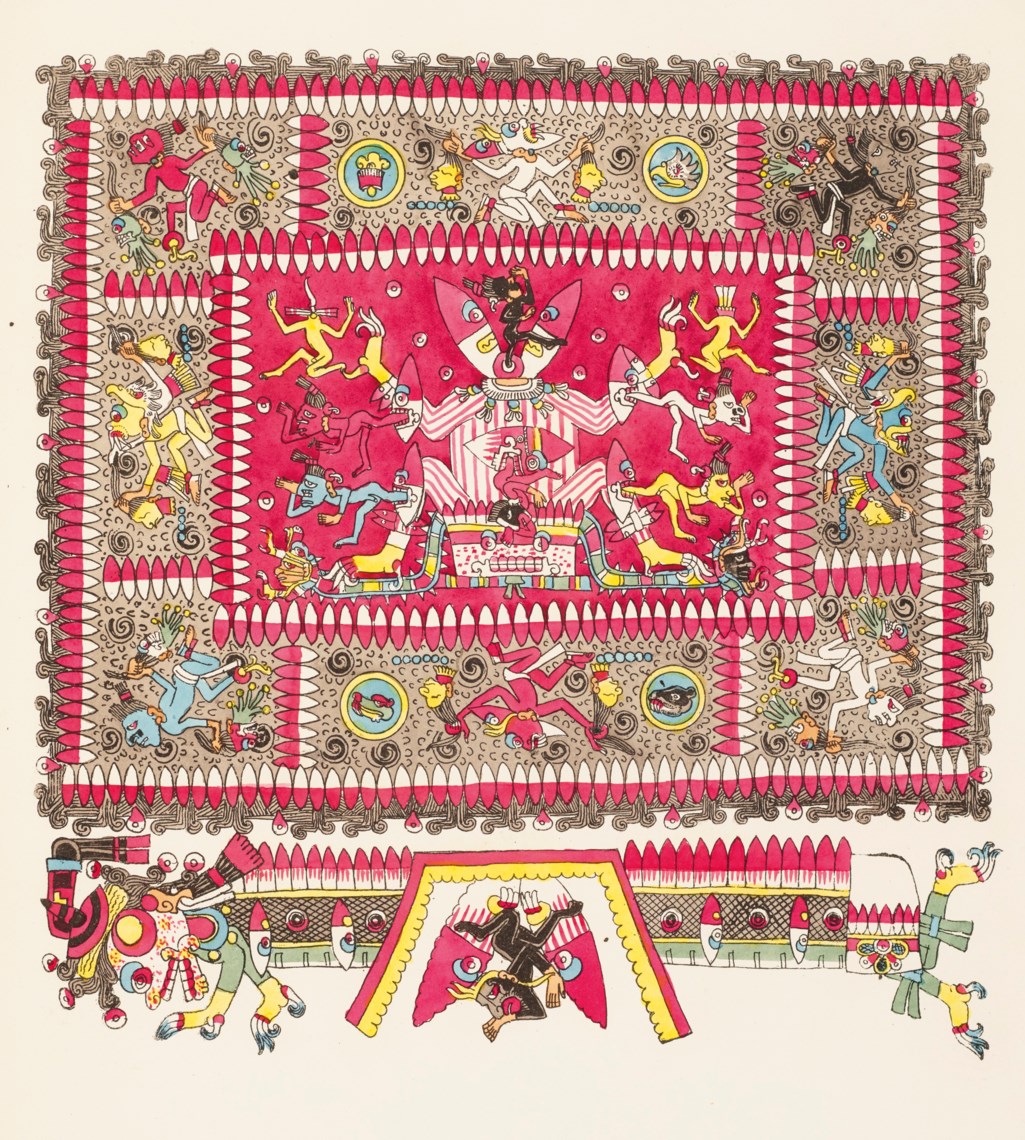 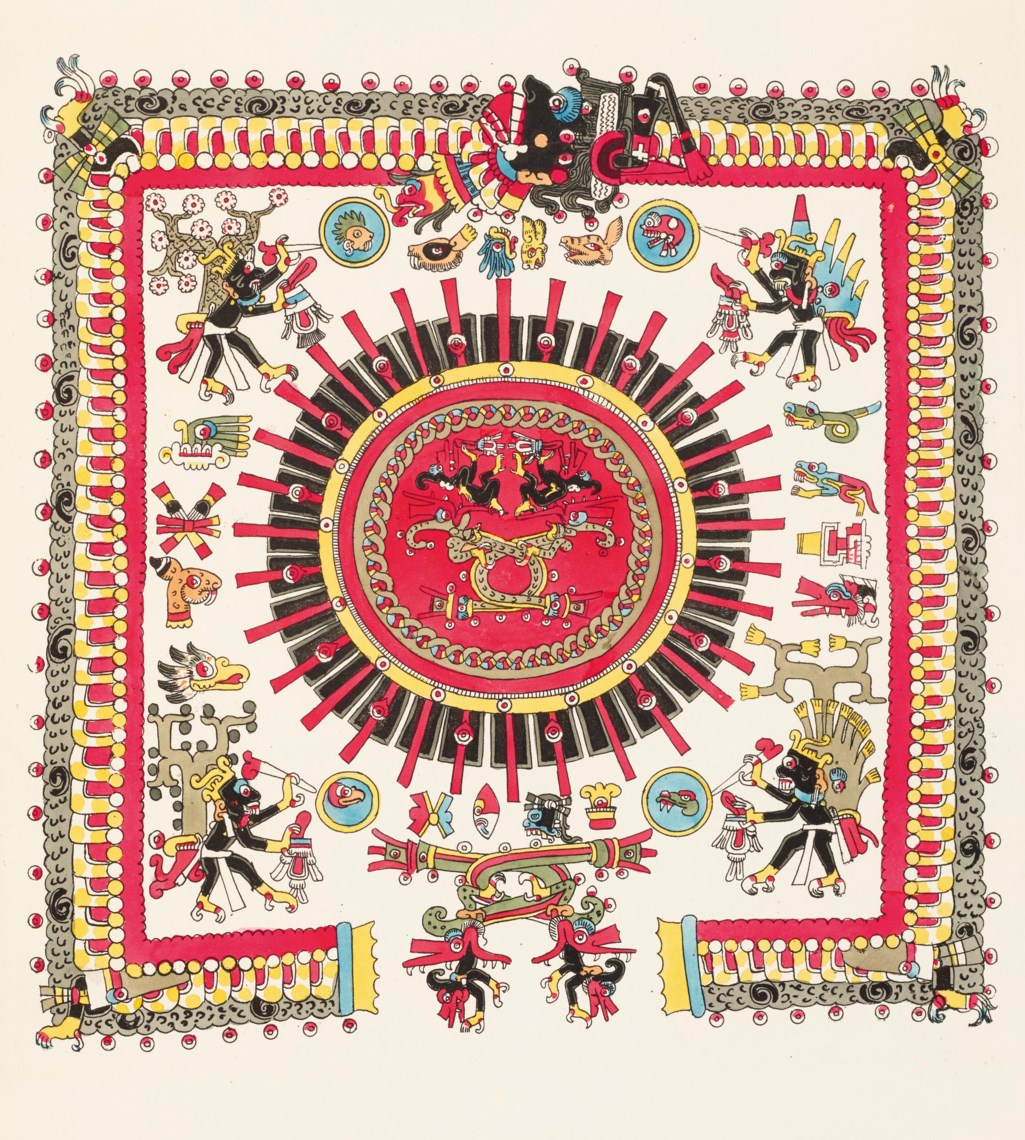 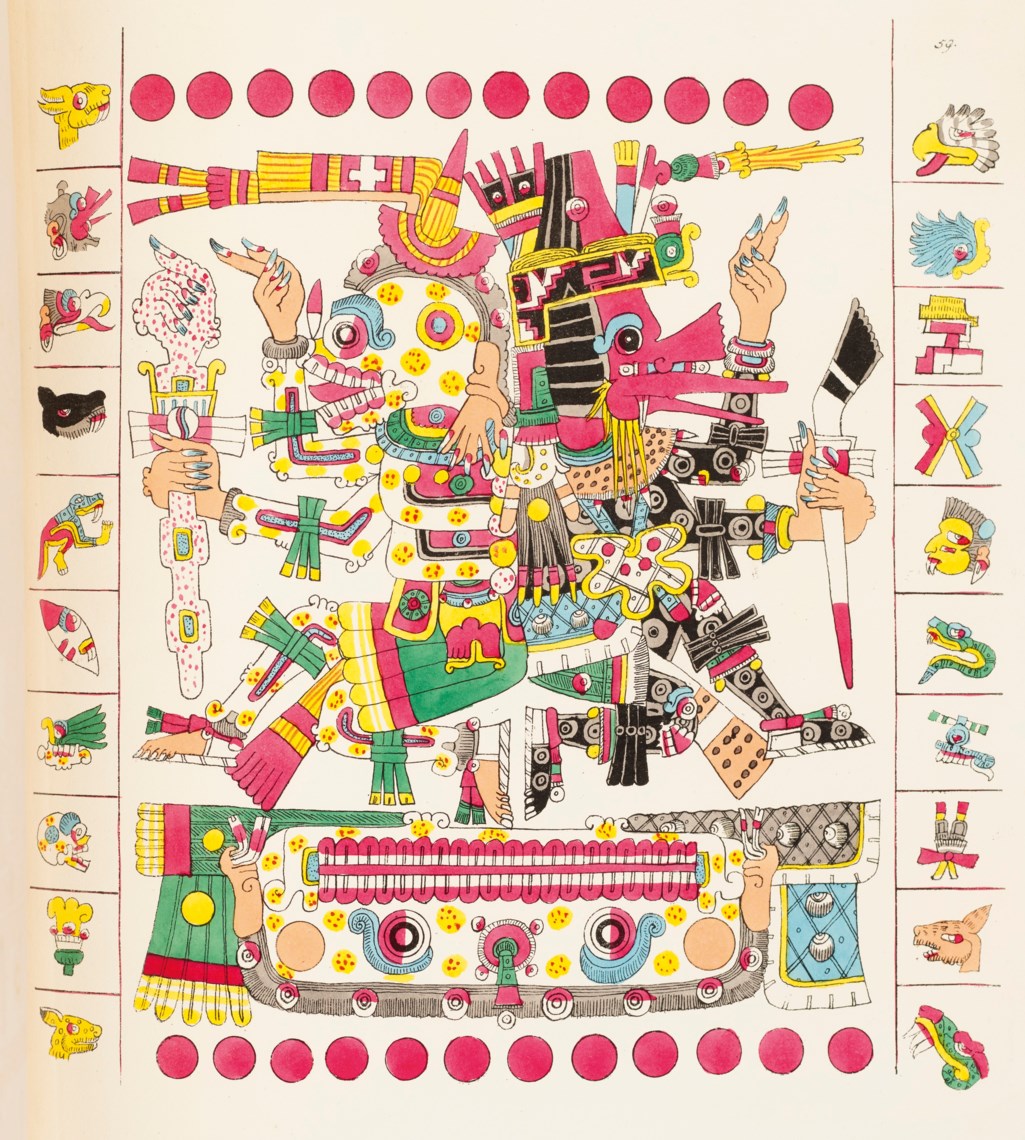 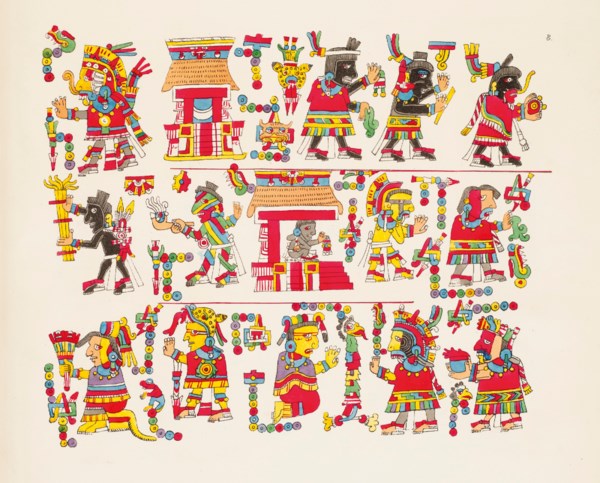 Lot 32
Colored Issue of Antiquities of Mexico
Viscount Kingsborough, 1830-48
USD 80,000 - USD 120,000
A Christie's specialist may contact you to discuss this lot or to notify you if the condition changes prior to the sale.
View Report
The condition of lots can vary widely and the nature of the lots sold means that they are unlikely to be in a perfect condition. Lots are sold in the condition they are in at the time of sale.

A fine copy of the colored issue of the greatest illustrated work on Mexican antiquities. The first issue of vols I-V, with titles dated 1830 and giving Augustine Aglio as publisher. As stated on the titles of vols I-VII, the work was intended to contain seven volumes; the last two volumes were published by Bohn in 1848 as a supplement based on the author’s notes. In 1831 Aglio transferred the stock of all seven volumes to Havell and Colnaghi, who printed new title pages with their address and the current date. Copies like the present one that retain the original title pages are uncommon.

The story of Kingsborough’s fateful obsession with Mexican manuscripts is well known: during his studies at Oxford he became fascinated by one of the Bodleian's manuscripts—the very one described by Samuel Purchas in volume III of his 1626 Purchas his Pilgrimes—and decided to devote himself to the study of Central American manuscripts and artifacts. With the support of Sir Thomas Philipps, many of whose manuscripts are described in the Antiquities, he employed the Italian painter Augustine Aglio to scour Europe’s greatest libraries and private collections for Mexican manuscripts to sketch, and later lithograph, for publication. Besides Aglio's reproductions of manuscripts in the Bodleian, the Vatican Library, the Borgian Museum, the Imperial Library of Vienna, the Library of the Institute at Bologna, and the royal libraries of Paris, Berlin, Dresden, and Budapest, the work includes Dupaix's Monuments of New Spain, taken from Castañeda's original drawings, and descriptions of sculptures and artifacts from several private collections. The text, with sections in Spanish, English, French and Italian, includes Sahagun’s Historia de la Nueva España and the chronicles of Tezozomoc and Ixltlilxochitl. The immense project cost Kingsborough £32,000 and his life: in 1837 he died of typhus contracted in prison in Dublin, a few days after being arrested for a debt to a paper manufacturer. His father the Earl of Kingston died a few months later; Kingsborough would have stood to inherit an annual estate of £40,000. Brunet III, 663; Lipperheide Md11; Palau y Dulcet 128006; Sabin 37800.

Selections from the Library of Lorenzo H. Zambrano: Latin Americana, Science, and Literature