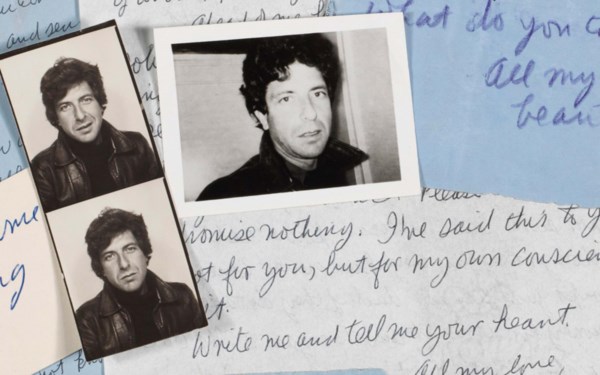 Sale 18162
Write Me and Tell Me Your Heart: Leonard Cohen’s Letters to Marianne
Browse sale 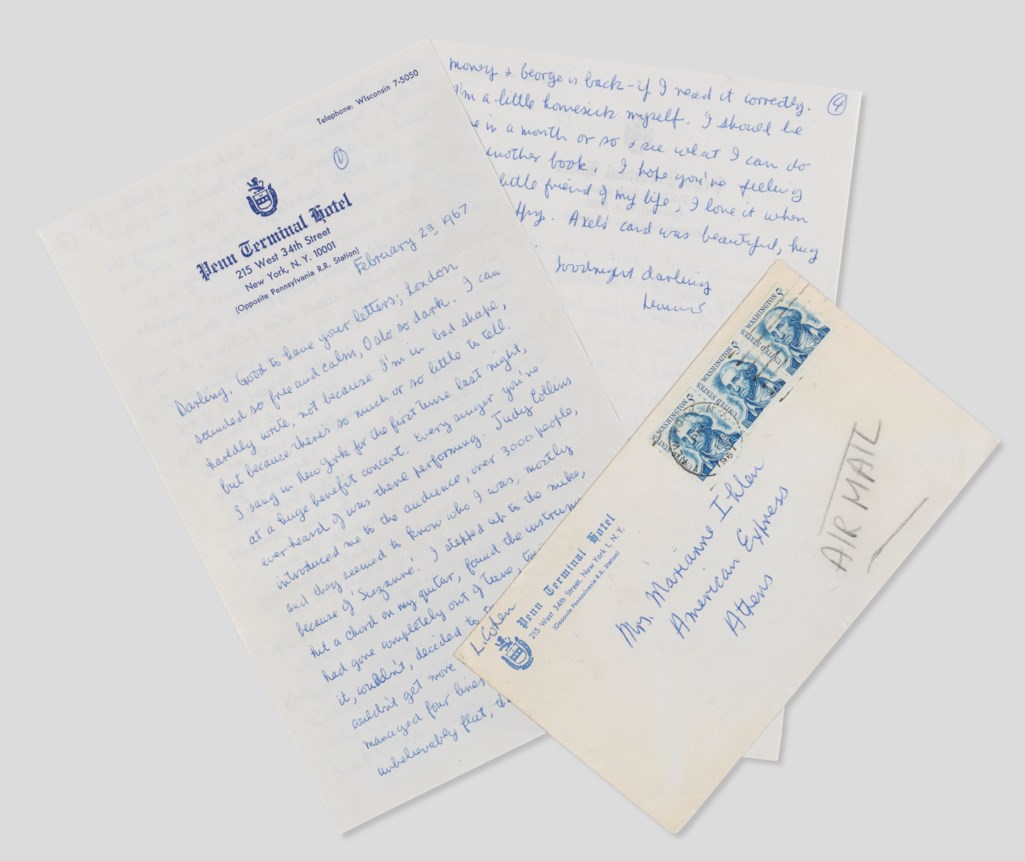 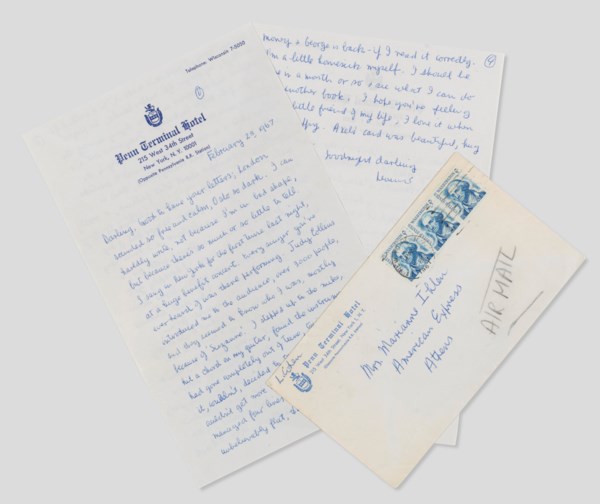 Lot 45
Cohen's first major performance
New York, 23 February 1967
USD 8,000 - USD 12,000
A Christie's specialist may contact you to discuss this lot or to notify you if the condition changes prior to the sale.
View Report
The condition of lots can vary widely and the nature of the lots sold means that they are unlikely to be in a perfect condition. Lots are sold in the condition they are in at the time of sale.

“I sang in New York for the first time last night, at a huge benefit concert. Every singer you’ve ever heard of was there performing. Judy Collins introduced me to the audience, over 3000 people, and they seemed to know who I was, mostly because of ‘Suzanne.’”

After years of struggling as a poet and novelist, in the mid-1960s Cohen decided to pursue a music career, and this letter marks his first major performance. He was championed by Judy Collins, who had recorded several of Cohen's songs with great success, and his first album, Songs of Leonard Cohen, was released in December 1967. Songs would include "So Long, Marianne" and "Hey, That's No Way to Say Goodbye," both about Ihlen, and the latter written during a stay at the Penn Terminal Hotel.

The performance in New York was rocky, but "the 13 year olds apparently liked it." "I stepped up to the mike, hit a chord on my guitar, found the instrument had gone completely out of tune, tried to tune it, couldn't, decided to try to sing anyhow, couldn't get more than a croak out of my throat, managed four lines of 'Suzanne,' my voice was unbelievably flat, then I broke off and said simply, 'Sorry, I just can't make it,' and walked off the stage." Collins entertained the audience for a few songs before Cohen returned—"I managed to squeeze Stranger out of my throat. The people love a failure, and I know why they loved me for those minutes and suffered with me, and let me be their bravest selves." Of the whole incident he writes, “A curious happiness seemed to overtake me: I had failed, I had really failed, there is something so beautiful about total failure, it really made me drunk.”

His updates have changed from publishing contracts to record deals: “Record contract still unsigned. The process is unbelievably complicated if you want to try to remain in control—lawyers, thieves, hustlers—everybody after a piece of the action. Probably signing with Columbia tomorrow—but since the concert all this is very distant.”

“This damn hotel, loneliness, isolation, insomnia, the secular triumph that always just misses me—it’s all made me calm and curiously happy, it’s all mine at last, it’s my kingdom.” He closes, "I'm a little homesick myself. I should be there in a month or so and see what I can do with another book. I hope you're feeling good, little friend of my life, I love it when you're happy."

By descent from Marianne Ihlen.

Write Me and Tell Me Your Heart: Leonard Cohen’s Letters to Marianne