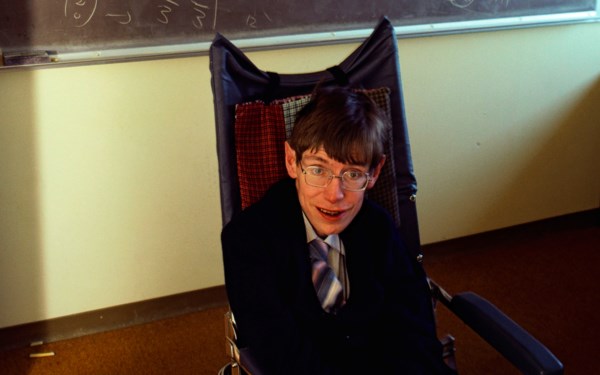 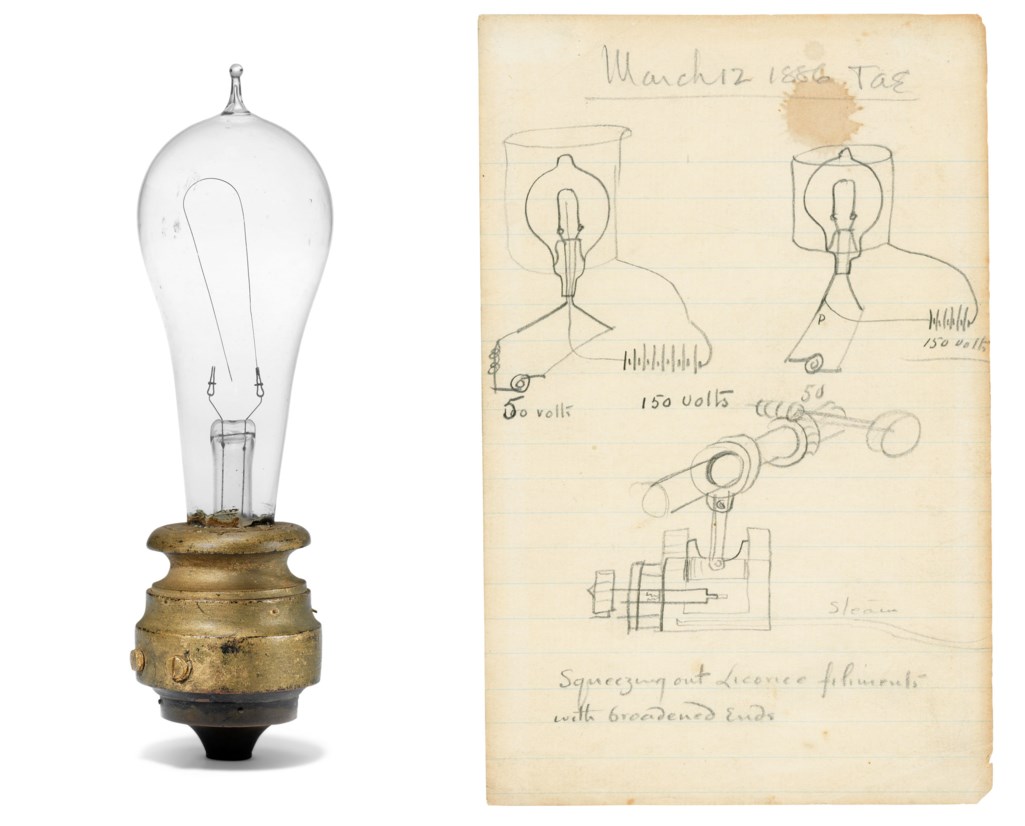 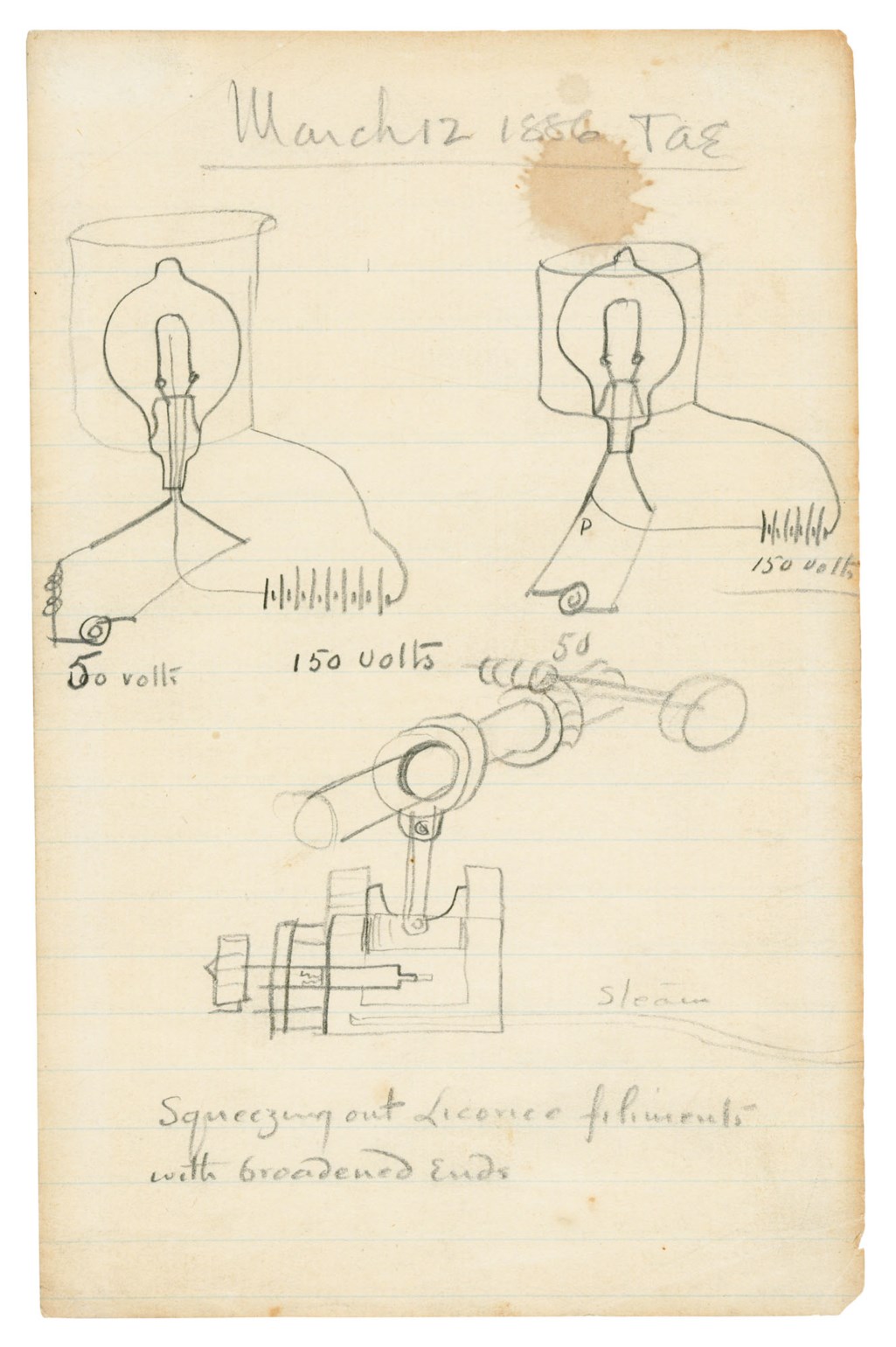 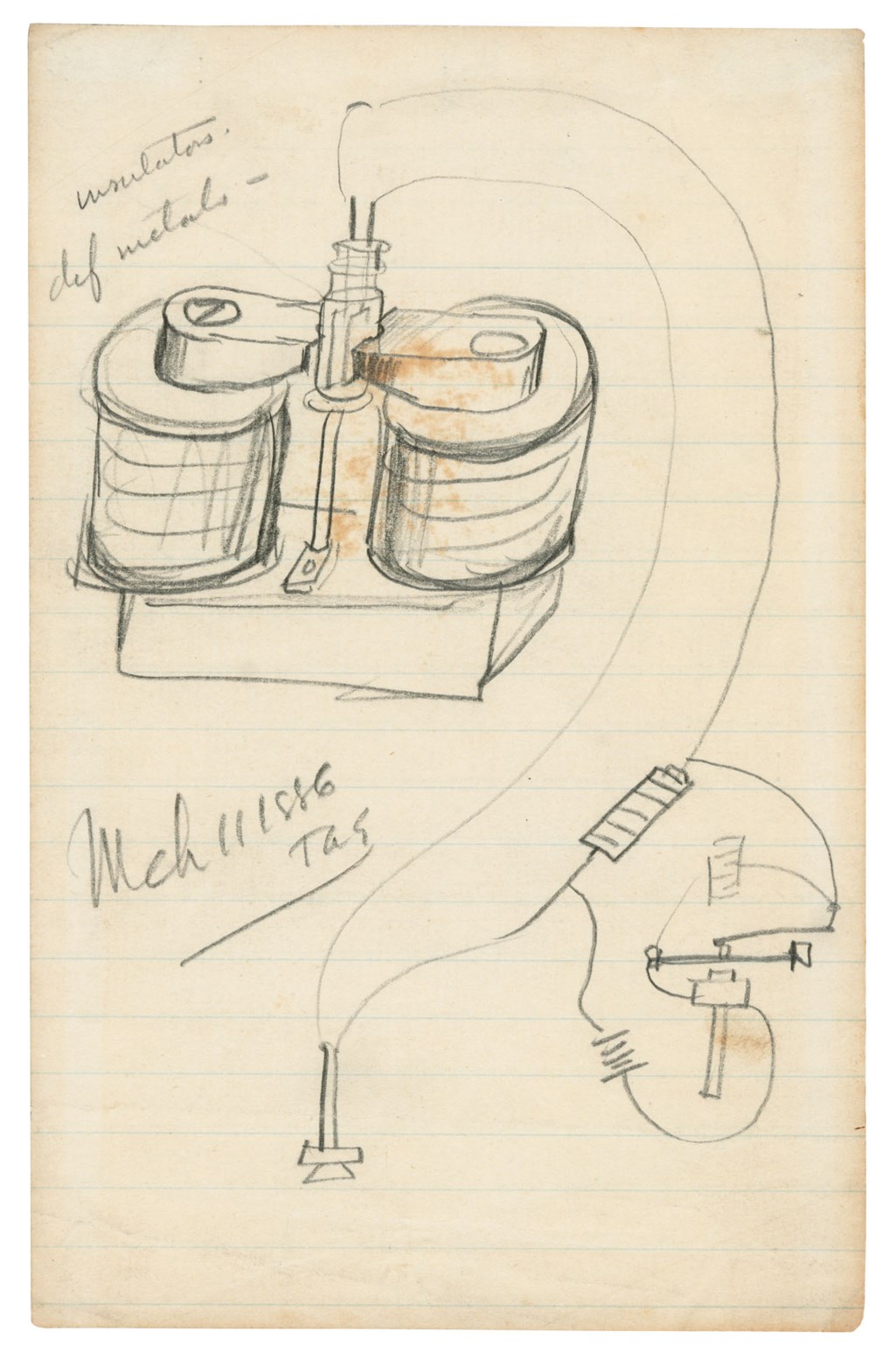 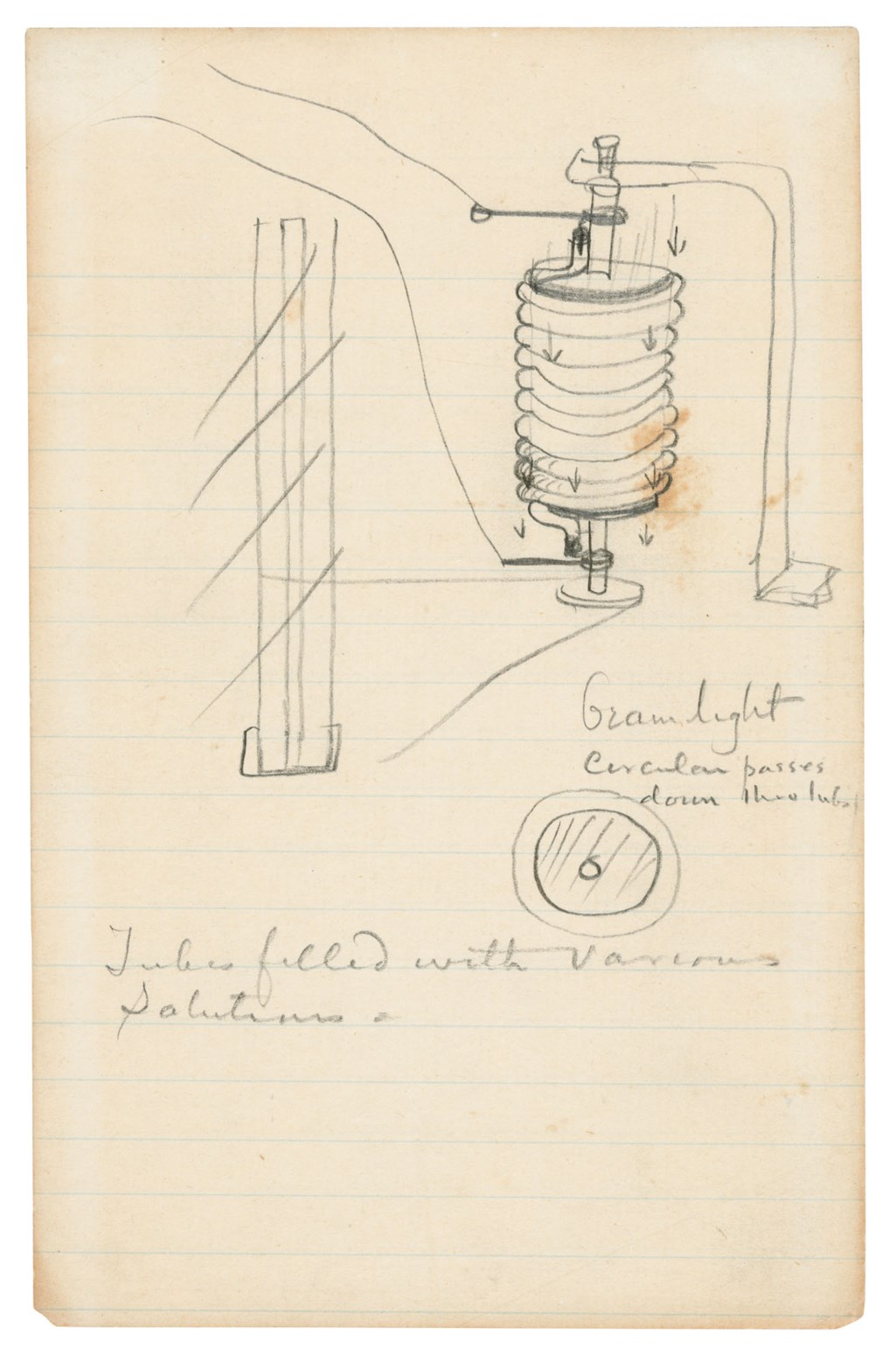 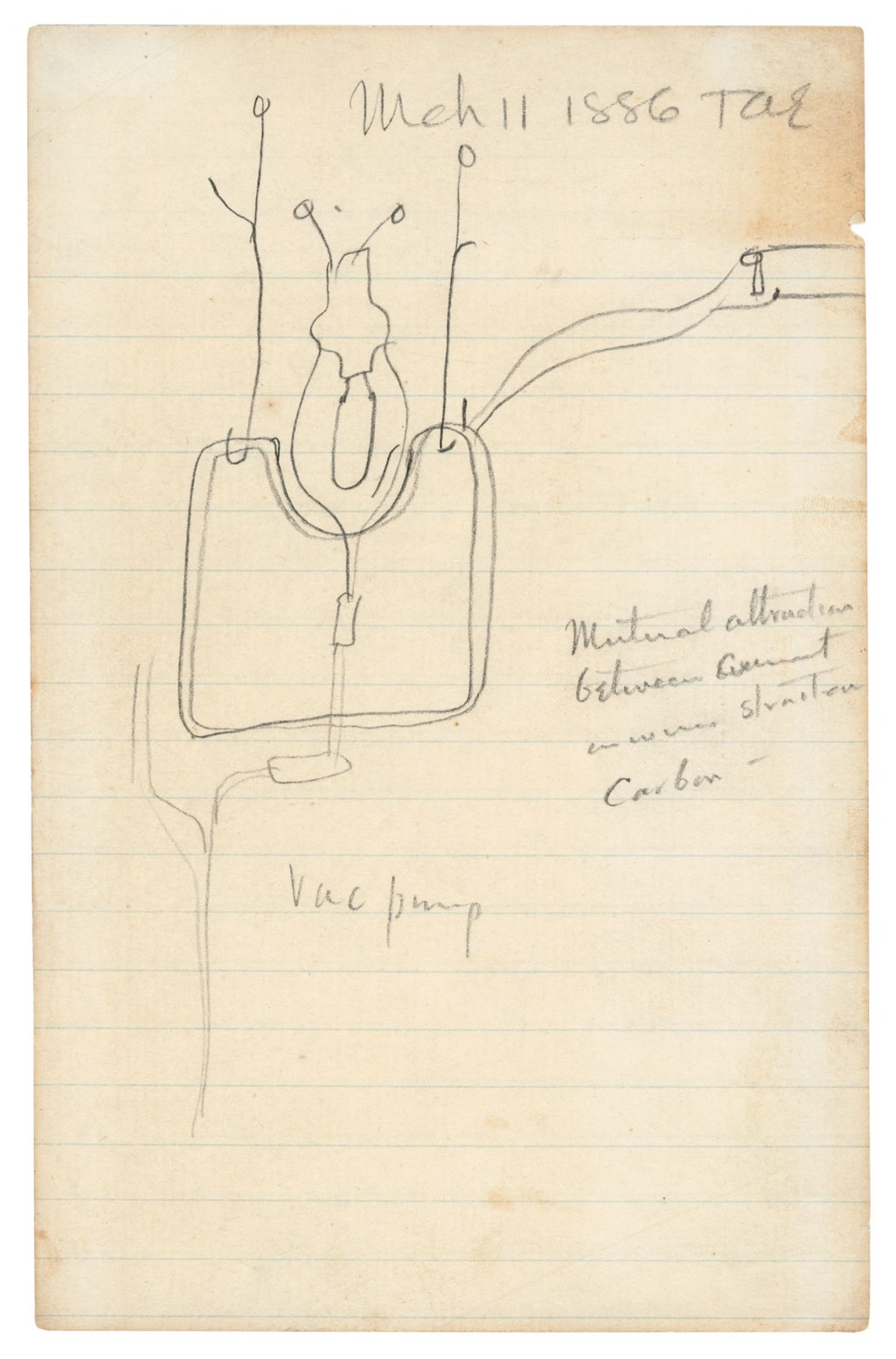 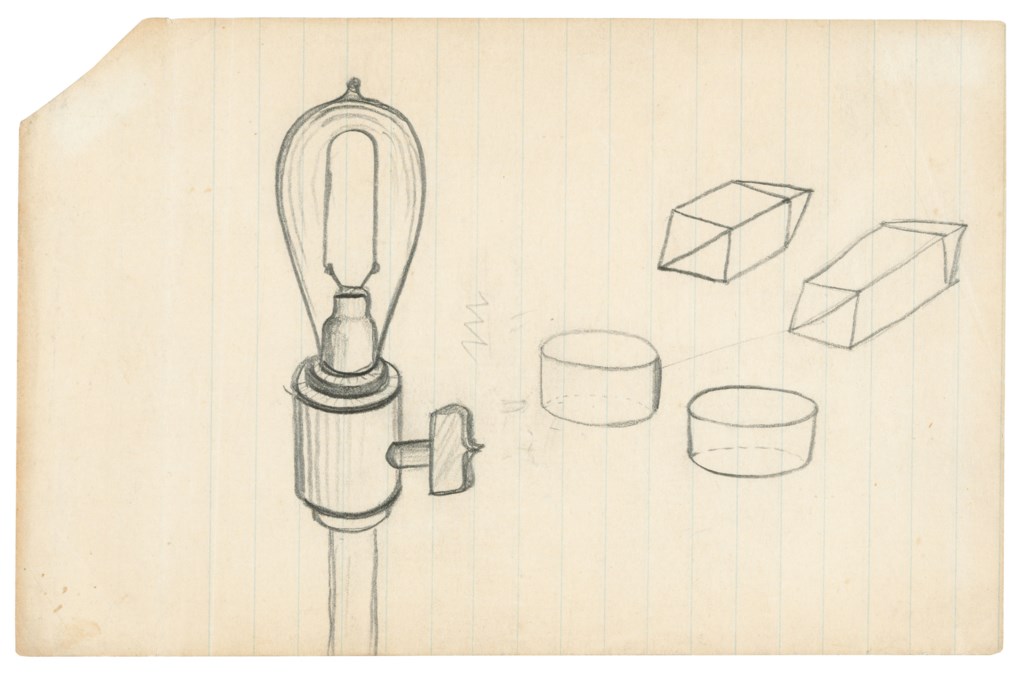 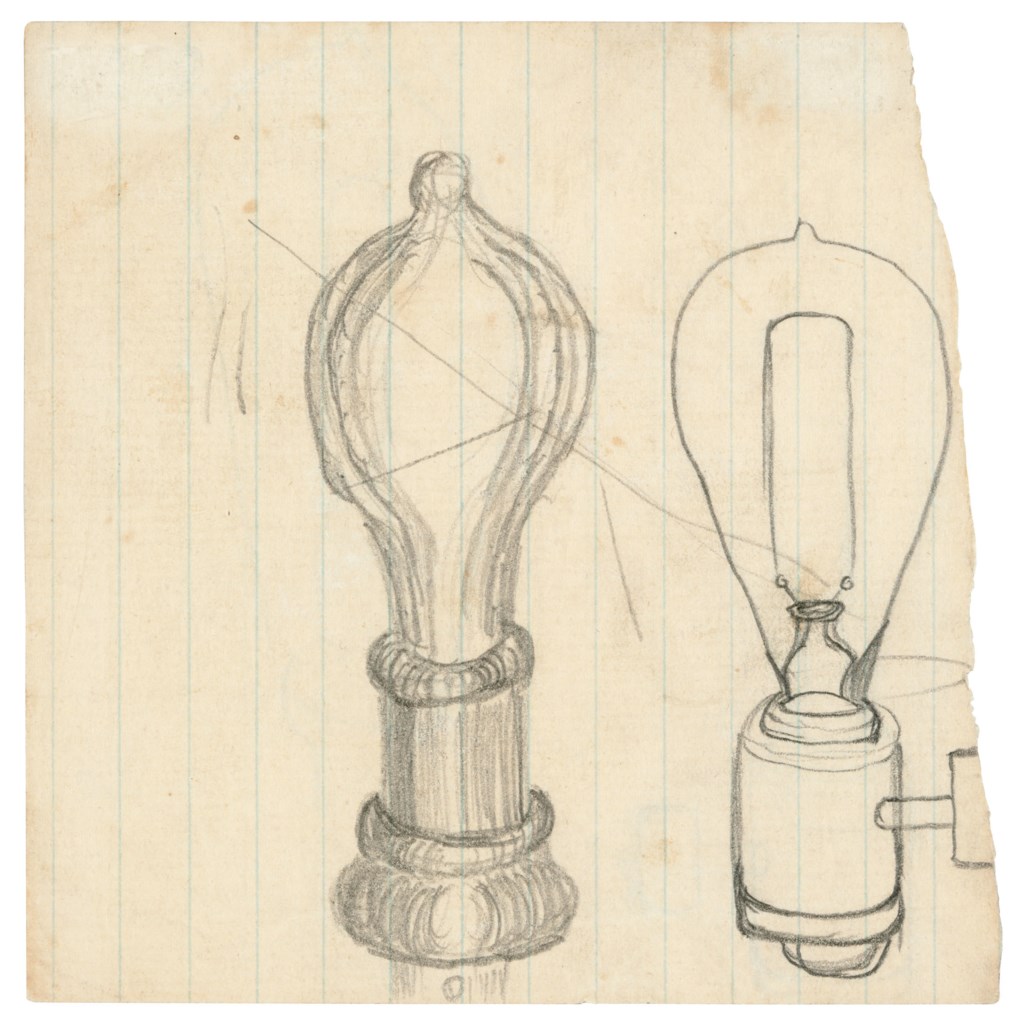 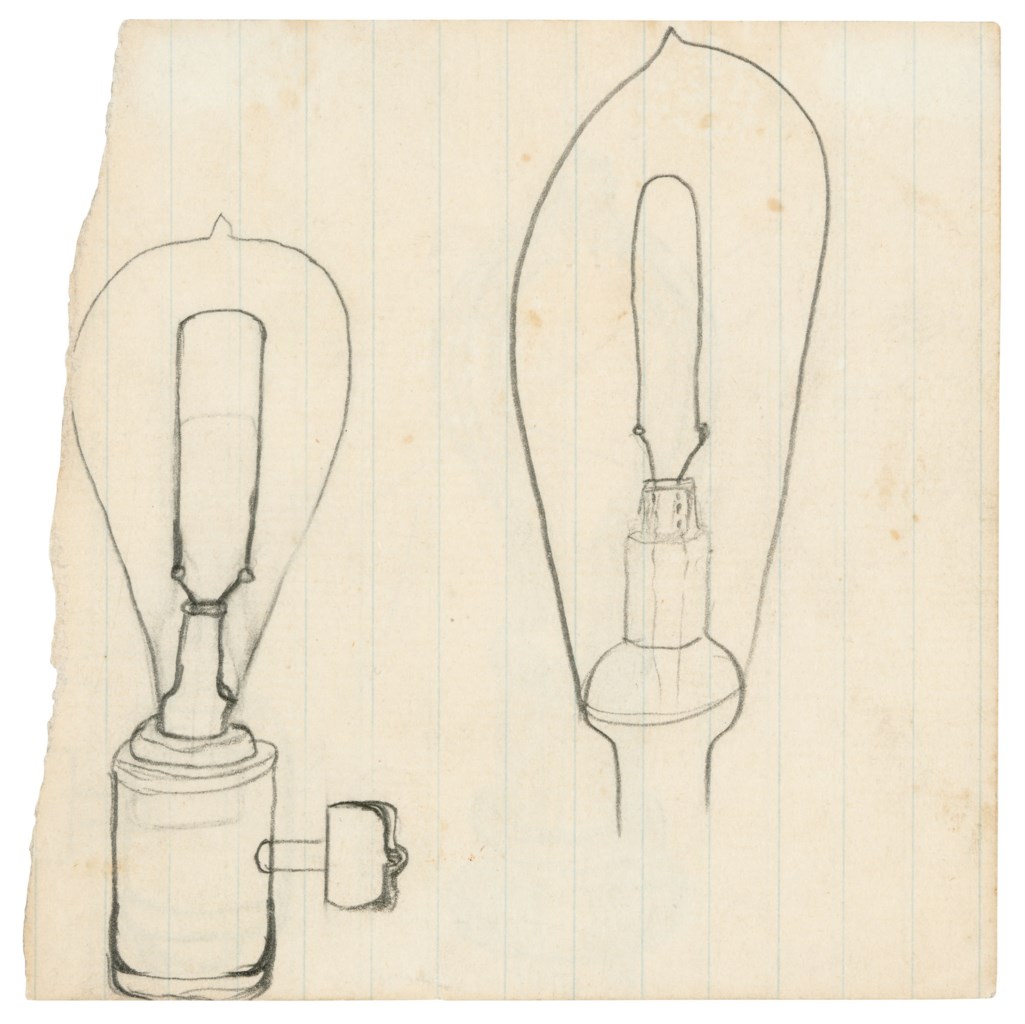 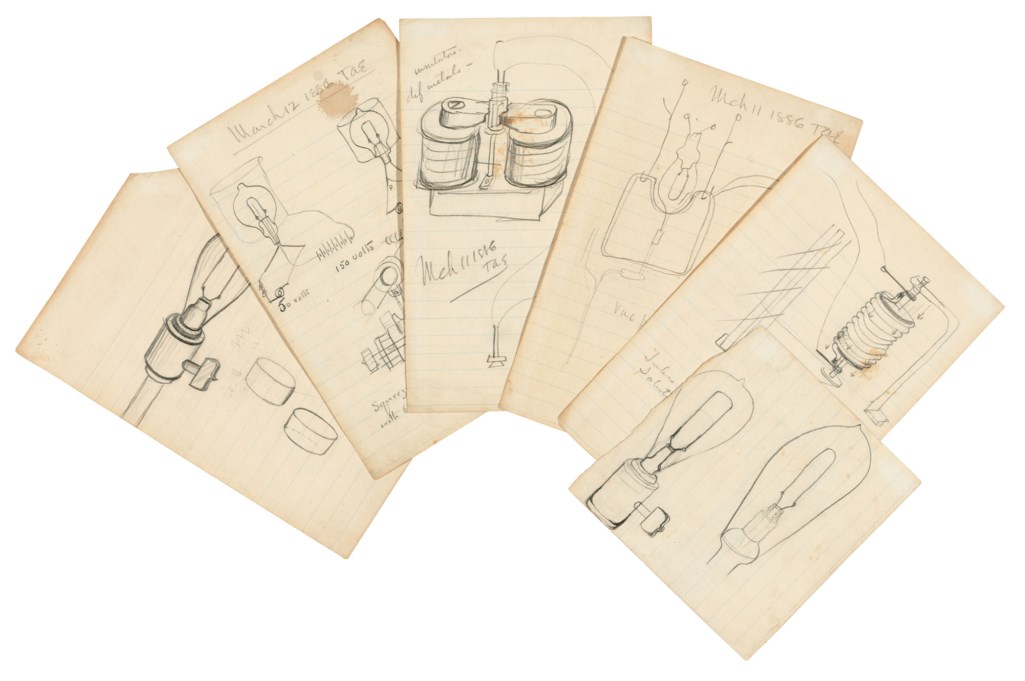 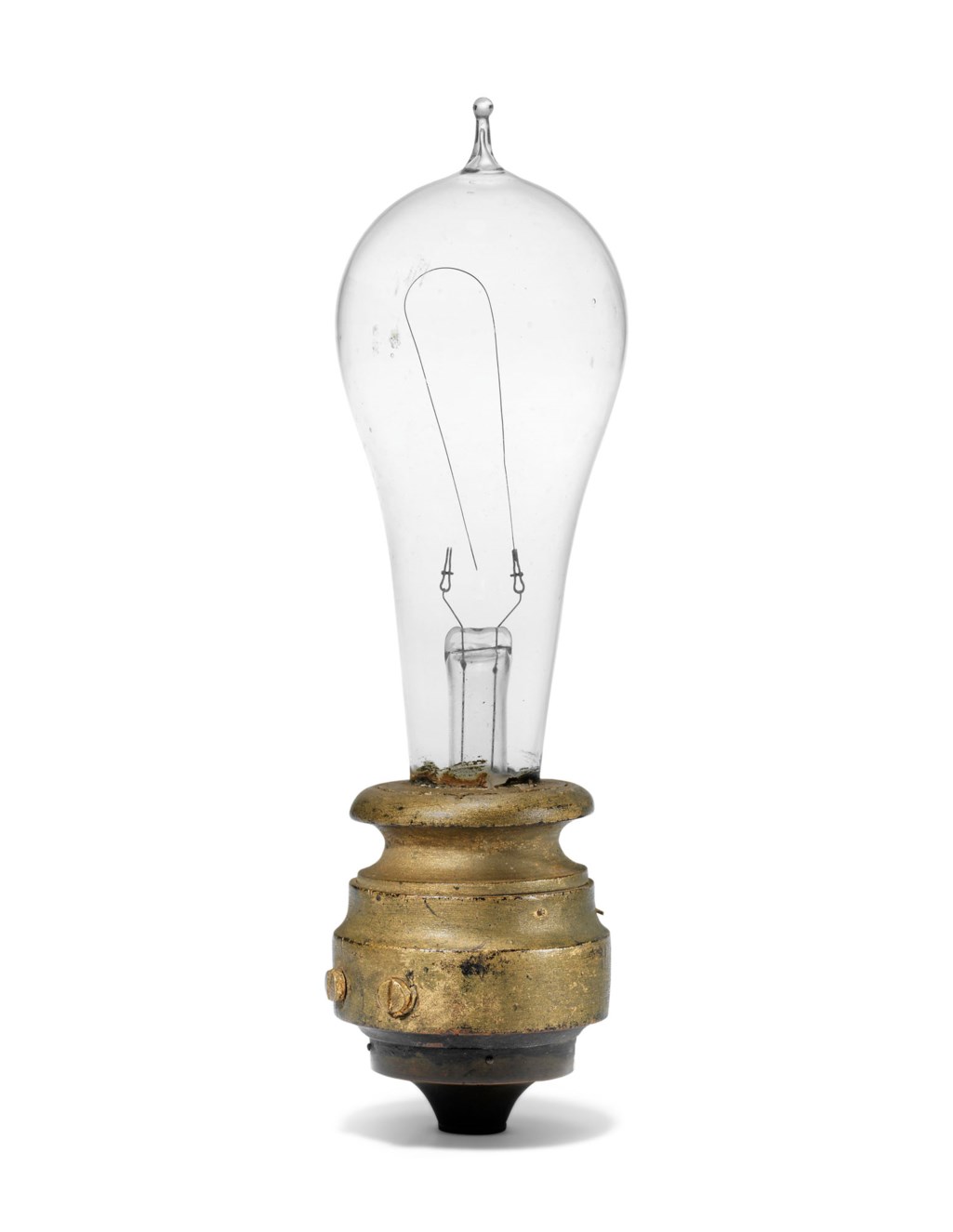 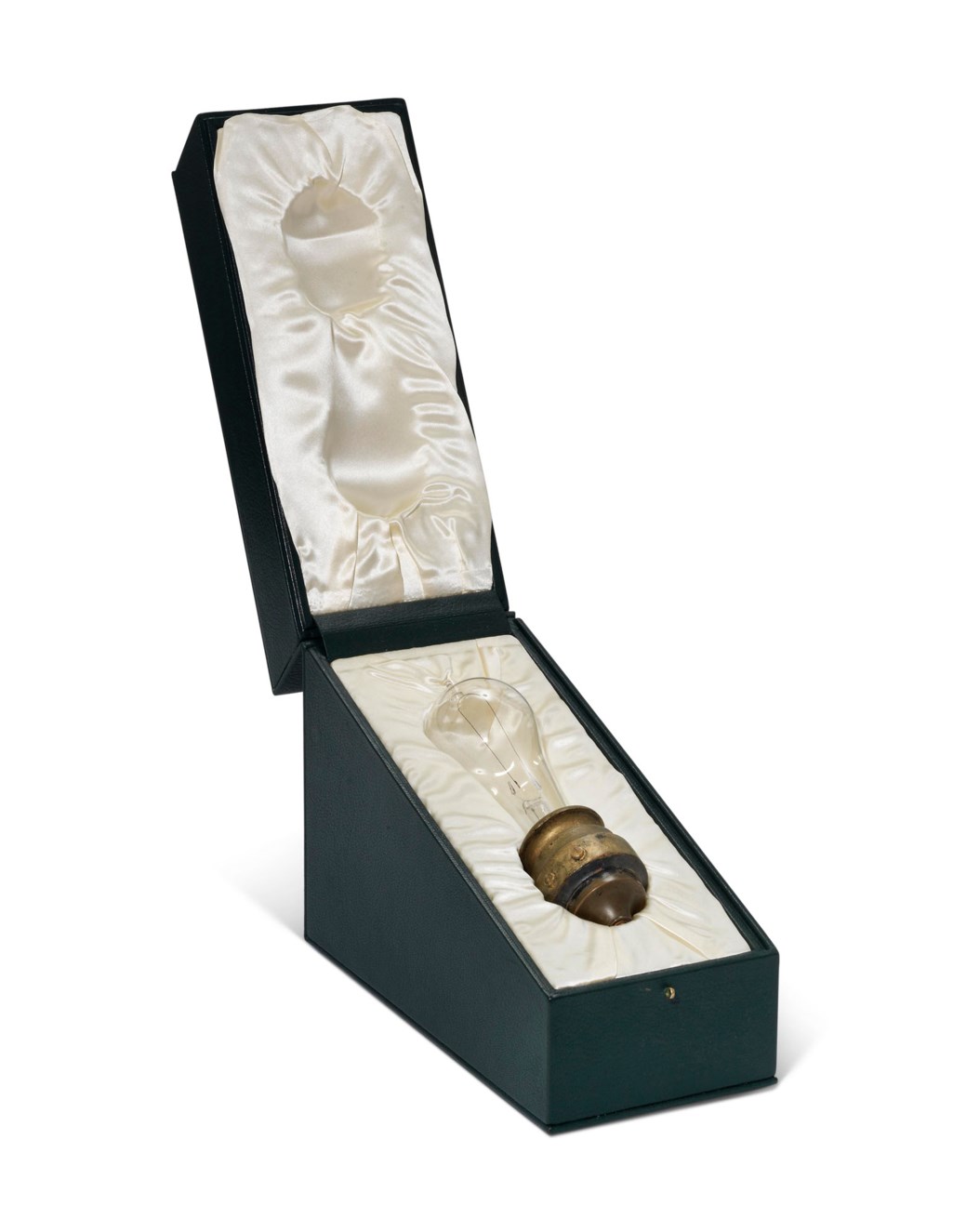 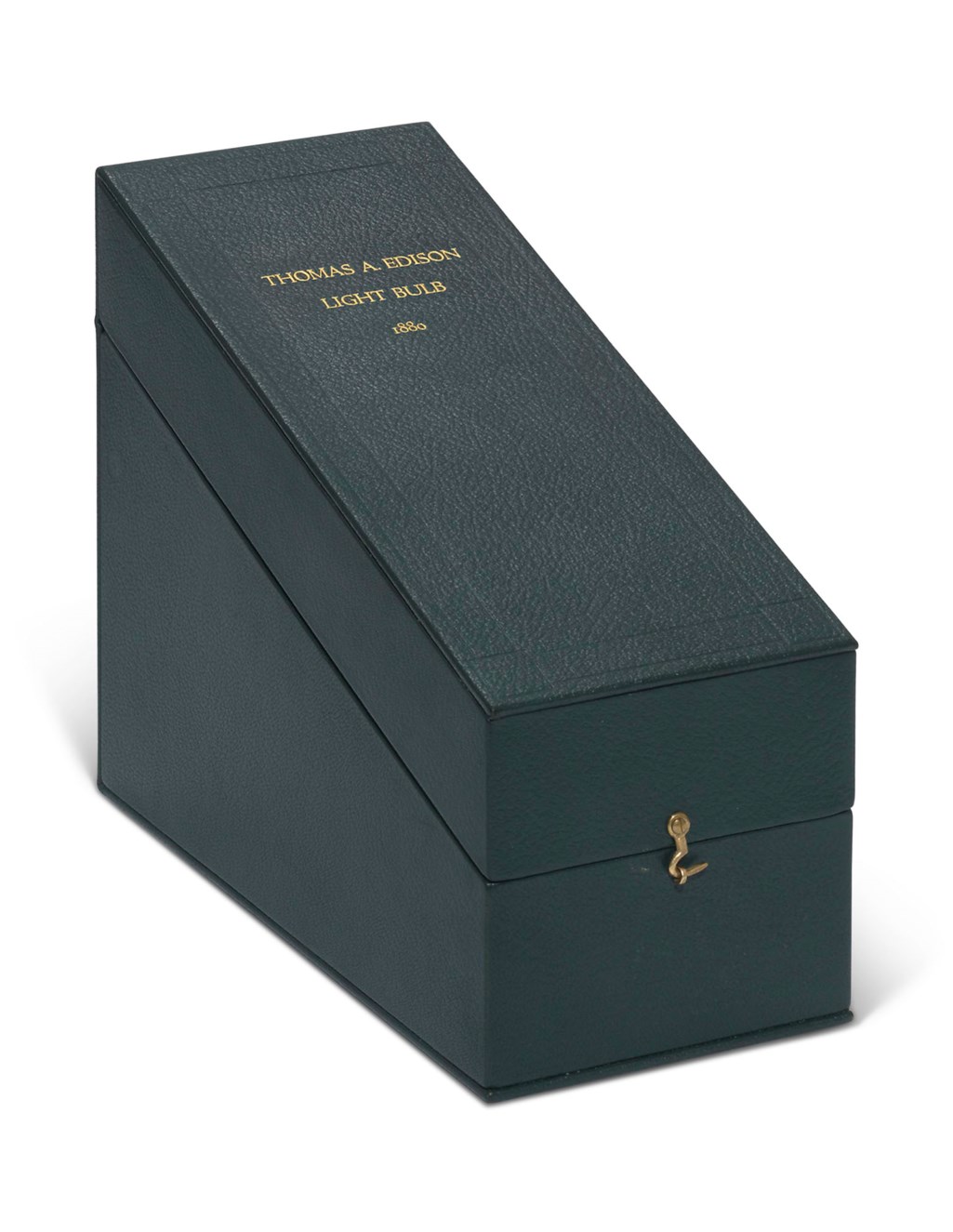 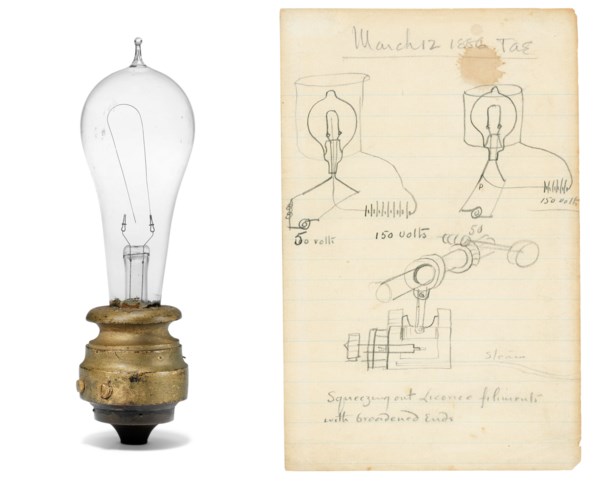 Lot 1
Edison works on his lightbulb
Thomas Edison. 1880-1886
GBP 60,000 - GBP 90,000
A Christie's specialist may contact you to discuss this lot or to notify you if the condition changes prior to the sale.
View Report
The condition of lots can vary widely and the nature of the lots sold means that they are unlikely to be in a perfect condition. Lots are sold in the condition they are in at the time of sale.

The drawings with scattered surface stains sometimes touching the designs or annotations, two leaves each with a small chip to the outer edge of the page, the final page a fragment. The filament of the lightbulb complete but loose at one end, the base and bottom of the glass bulb showing evidence of earlier painting.

6 leaves extracted from a ruled notebook, 198 x 127mm on average, the drawings and autograph annotations all in pencil, on rectos only save for the final half-leaf (scattered surface stains sometimes touching the designs or annotations, the final page a fragment).

The lightbulb approximately 21 x 6cm at its widest point, flat seal stem, carbonised bamboo filament connected by platinum clamps to the electric wires (the filament complete but loose at one end). Both the leaves and the lightbulb presented in green morocco gilt cases.

The subject of the design drawings are as follows:

Page 2: A horseshoe electromagnet of the kind as used in telegraphy; between the two poles of the magnet is a glass cylinder with two internal plate electrodes, connected via a resistor to a Bell telephone. Parallel to the resistor is a circuit comprising a battery in series with a Bell telephone and a switch. Initialled and dated (‘Mch 11 1886/ TAE’), annotated ‘insulators def metals’.

Page 3: A cylinder made up of individual tubes with connecting wires, presumably leading to an unseen electrical source. Annotated ‘Tubes filled with various solutions’ and ‘?Gram light circular passes down thru tubes’.

Page 4: An electric lamp connected to a vacuum pump, next to moveable wires. Initialled and dated (‘Mch 11 1886 TAE’) and annotated ‘Mutual attraction between current in ?wires straiten carbon’ and ‘Vac pump’.


Thomas Edison works on his lightbulb. Edison built the first high-resistance, incandescent electric lamp in his Menlo Park laboratory in 1879 – the first successful test took place in October and the New York Times trumpeted the invention of the ‘Edison Light’ in their 21 December edition – but the carbonised paper filaments burned out within a few hours. Undaunted, he applied for the first patent on 4 November 1879 and over the next year a further 32 applications were sent from Menlo Park as Edison and his team tested thousands of filament materials: the discovery of a carbonised bamboo filament that could last over 1,200 hours allowed for the development of the forerunner of the modern lightbulb. In 1881, 500 ‘Edison Lights’ were exhibited at the inaugural International Exposition of Electricity in Paris, with people queuing to switch on the electric light and experience the marvel for themselves; by 1884, the city of New York registered 508 users of the ‘Edison Light’, with 10,164 lamps between them.

The present drawings testify to Edison’s continued work on the electric lamp throughout the 1880s, as well as offering an example of the related inventions that filled his design notebooks. In March 1886, while on honeymoon in Florida with his second wife, Edison is considering adding additional electrodes to electric lamp circuits, building, perhaps, on the ‘Edison effect’ first observed in 1875 and refined in 1883; designing a receiver for an electromagnet, which bears some similarity to the reed relays invented years later and used in telephone switches; and experimenting with the manipulation of Ampère’s force law.